This is going to be a long one, so let’s start with a couple of announcements.

You get dynamite reductions on all our yearly memberships UNTIL THE END OF CHAG.

That’s just eight more days for all good Jews and Noahides to go to the show, step up to the plate and swing for the fences. 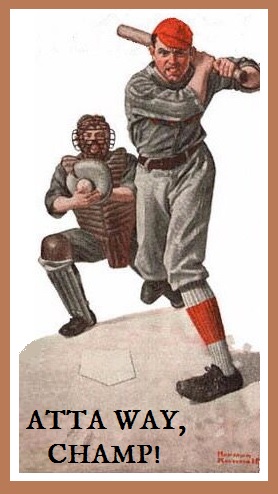 Second, next Thursday’s issue of A Jew and His Gold will not be forthcoming, owing to the seventh day convocation of Shevi’i shel Pesach (4/21).

We’ll resume with our regular publishing regimen the following Monday (4/25).

Third, we have one trade to close today, a number that require your attention (as today is April options expiry – owing to the holiday-shortened work-week), and, of course, a new trade to offer.

Give Me a Bracha!

May you all experience a genuine exodus from your own personal Egypt this year, and may the Final Redemption arrive speedily, bringing the entire world to a new era of peace, prosperity and genuine health. 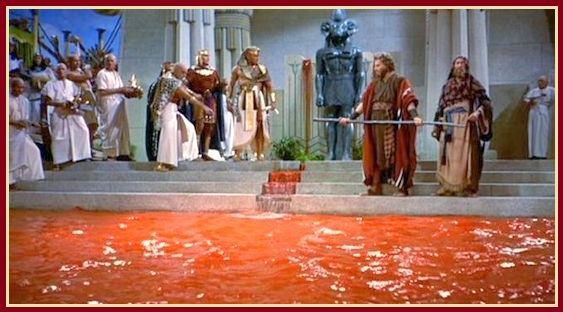 And now we get down to it.

We’re closing our SHOP initiative, the details of which can be found HERE.

With SHOP closing last night at just $591.06, we figure it’s the ideal time to close.

While we still like the trade, it appears we’ll be on the hook for most of the five points on the CALL spread at expiry.  So we’re acting thus –

We’re setting the RGLD June 17th 140 synthetic short* for a credit of $4.40 (10.20/5.80), offsetting the loss on today’s CALL spread (details after the close) and giving us full exposure to the coming downside.

Here, too, we face a five point loss on the CALL side, and we’re therefore acting as above –

That will give us another month of life, all but eliminate our debit, and open the way to full participation on the downside.

Full details after the close.

That will flip our debit to a credit of roughly $3.50 (details at the close) and allow us to participate fully in the coming decline. 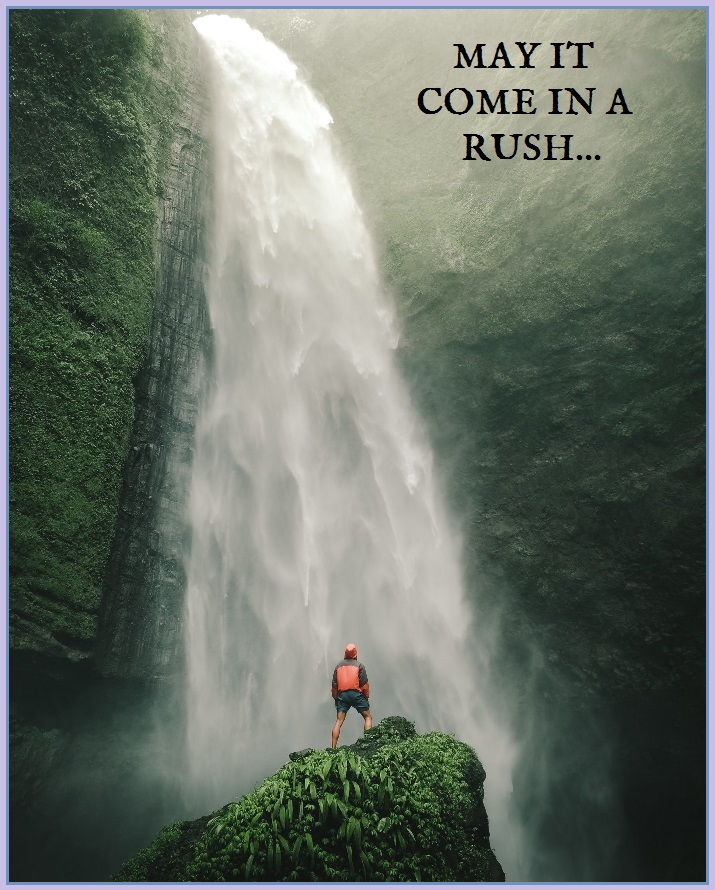 It was a fine 9th of March when our KR communiqué traversed the trans-oceanic fiber-optic and arrived at you in the form of This Four Cent Investment Could Bag You 17,400%.

We’ll be in the hole by perhaps $3.00 when the CALL spread expires this eve, and that means we have to move.

Exact details after the close.

Unless we get some heavy action on the upside, it appears the options will expire worthless and we’ll take a loss of $0.20 – our initial debit on the trade.

That puts us $1.90 in the plus column and gives us another month to play.

At the close, the piper’s going to call for his $2.00 on the CALL spread, but that doesn’t mean the trade idea belongs in the landfill.

That offsets the loss, gives us two more months, and let’s us play with any HAL pullback that ensues.

Moving on, we arrive at our XOM trade from February 7th and a dispatch called Exxon Mobil Director Pockets $120 Million. Now It’s Your Turn!

Well, today we’re still fond of the trade, though the CALL spread will likely tap us for $2.50 at the close.

That turns our debit to a credit of roughly $1.10 and gives us an extra month to profit from any XOM retreat.

Our GWW trade had a nice profit, but, alas! we waited too long on it.

Today, we’re still GWW bears, though all our options will expire worthless tonight, leaving us holding our initial debit.

So we’re recommending the following action –

That’ll provide us a small profit when it expires a month from now, G-d willing.

The details of our SEE trade can be accessed HERE.

In summary, we’re in possession of the 55 synthetic short expiring this eve and a credit of $1.10

But with SEE trading at $67.30, we find it necessary to take the following evasive action –

That will give us a credit of roughly $1.80 (full details after the close) and another 30 days play.

Last Up is FCX.

Details on our FCX trade can be found HERE.

And that means our short CALL is in-the-money.

That will flip our debit to a credit of approximately $2.75 and give us another month to profit. 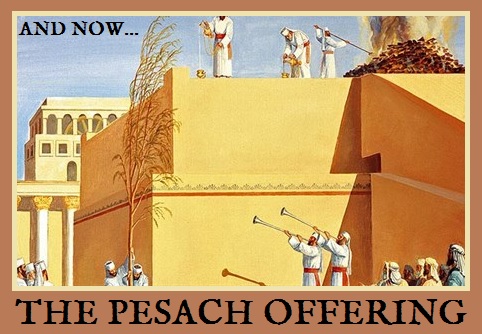 Today’s trade is a rather straightforward look at American Eagle Outfitters (NYSE:AEO), makers of jeans in a more traditional mold.

The company’s stock has been court-martialed, shot and sent to the Biden White House to be bored to death…

And that’s why we love it.

As the chart below shows, it’s very likely the stock has hit bottom and is ready for a bounce.

But first, some fundamentals –

Only problem is supply-chain issues stemming from factory closures in Vietnam and additional freight costs that are afflicting everyone.

That said, AEO grew their online direct-to-customer business during the BATFLU by 46%, and the brand itself remains rock solid.

So we’re OK there. 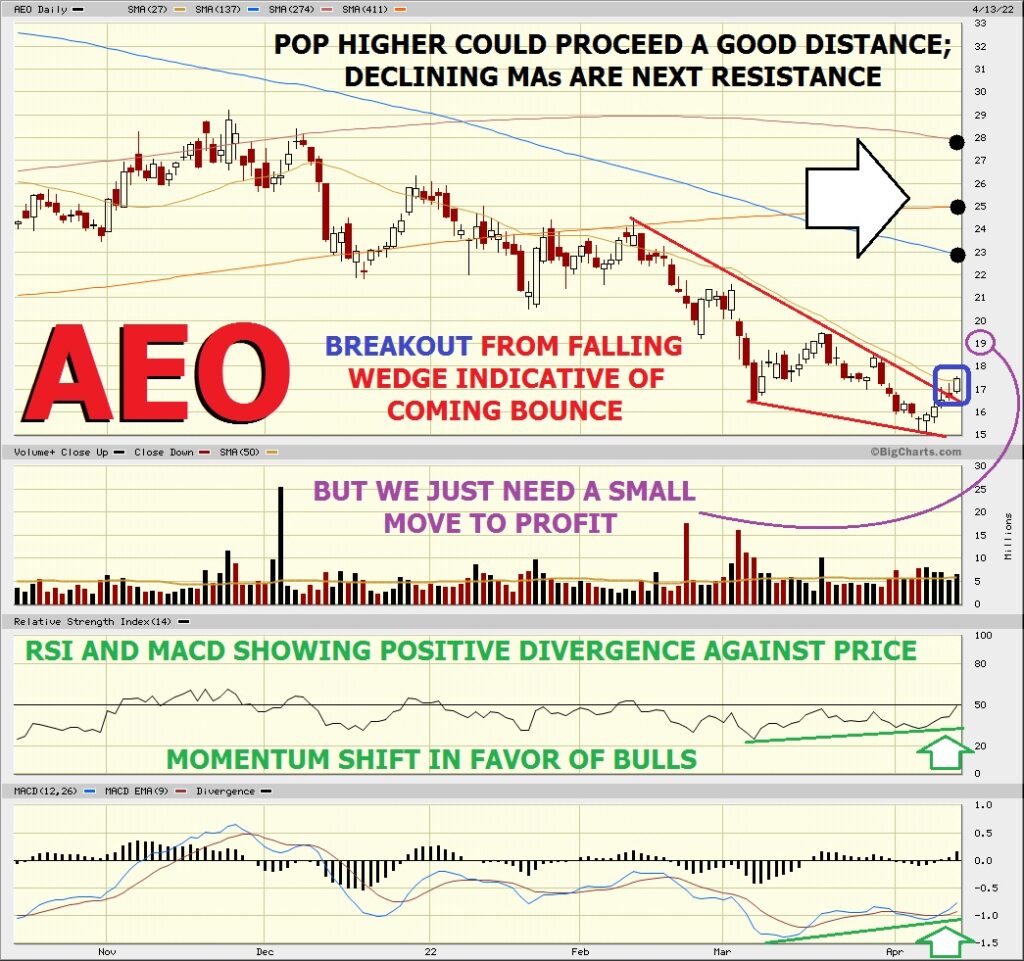 All things considered, this is an extraordinarily safe bet – as it’s structured – and we’re recommending you take on a full plateful of matza.

Rationale: if all goes well, and we get the pop we’re expecting, your max return on the trade is a solid 11.7% – in just over a month.

We have a number of other candidates ready for this strategy in the weeks ahead.  As the market bottoms, we’ll seek to play a good quantity of stocks in this manner.

Feel free to set a STOP sell order on the stock at $16.90, or thereabouts, in order to limit losses in a worst case scenario.  (At that price your loss would be a dime.)

And enjoy your seder, friends.  May we all merit to see the chimes of freedom flashing.