Fire in the Vatican! (SMG)

Uncle Richard was for years an executive with the Revlon company.  He made a good living, but in the late 1980’s he decided to retire and to try his hand as an entrepreneur.  His first project was in the personal hygiene space.  He developed a new line of deodorants he called ARSON.

For whatever reason, the business didn’t work out, and things generally started fizzling for Uncle Richard.  His wife of some forty years left him for a hotelier from the Ozarks, and he found himself drifting from job to job, experimenting with shamanism, all the while lamenting the fact that no one understood the genius behind the ARSON concept. 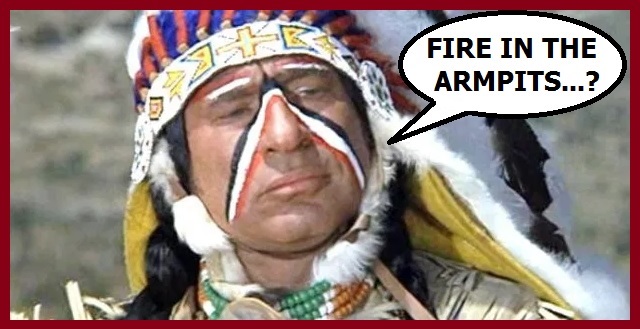 Uncle Richard made his peace with this world about a decade ago, after purchasing a small plot in Baja and growing a few vegetables on it.  He was supported ‘til the end by his son, Richard Jr., and was laid to rest in a peyote-inspired ritual that to this day very few in the family understand.

And that leads us directly to our trade for the day.

Back in May, you’ll remember that we turned a fat buck’s profit on a trade we launched using Bayer AG in a letter called Organic Producers Loaded for Bayer.  You can get the trade details here, if you like, but we don’t bring it up just to brag like a chicken hawk.

Rather, we’re predicating today’s trade on the same theme that netted us those big bucks a couple of months back.

That is, the demise of Bayer was due to litigation surrounding a carcinogen called Roundup that the company produces – a product that , apparently, also has weed control applications.

Our trade today is based on the inevitable blacklisting of Roundup and the likelihood it’ll take down all those who lean heavily on its sales for their daily bread. 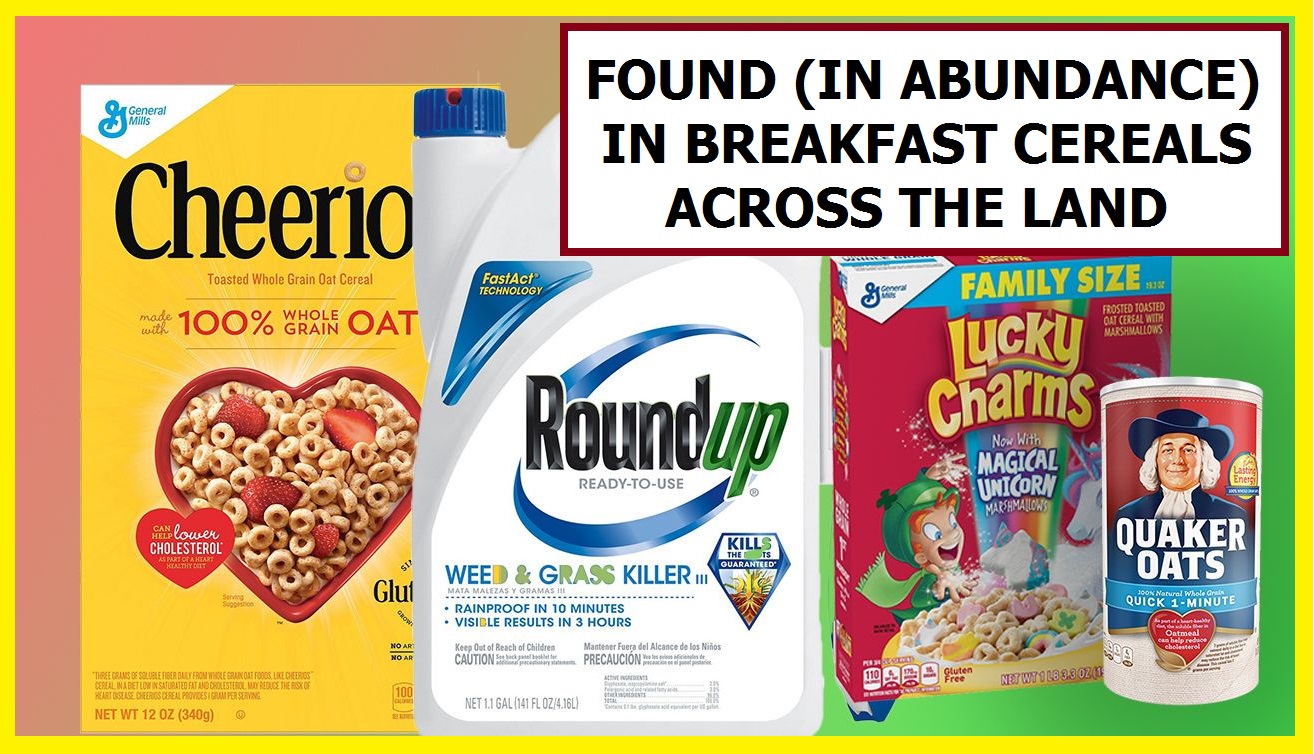 One such company is Scott’s Miracle Gro (NYSE:SMG), an outfit that’s moved increasingly into the cannabis space over the last few years, expanding on its theme of poisoning the general public with a range of toxic chemicals.

That move has helped them financially, to be sure, but still constitutes too small a percentage of their overall business to make a dent in what’s about to hit.

And what’s that, nature boy?

The way we see it, the run-up in SMG stock over the last six months has been overdone, as the chart below indicates.  And we say it’s time for a rest. 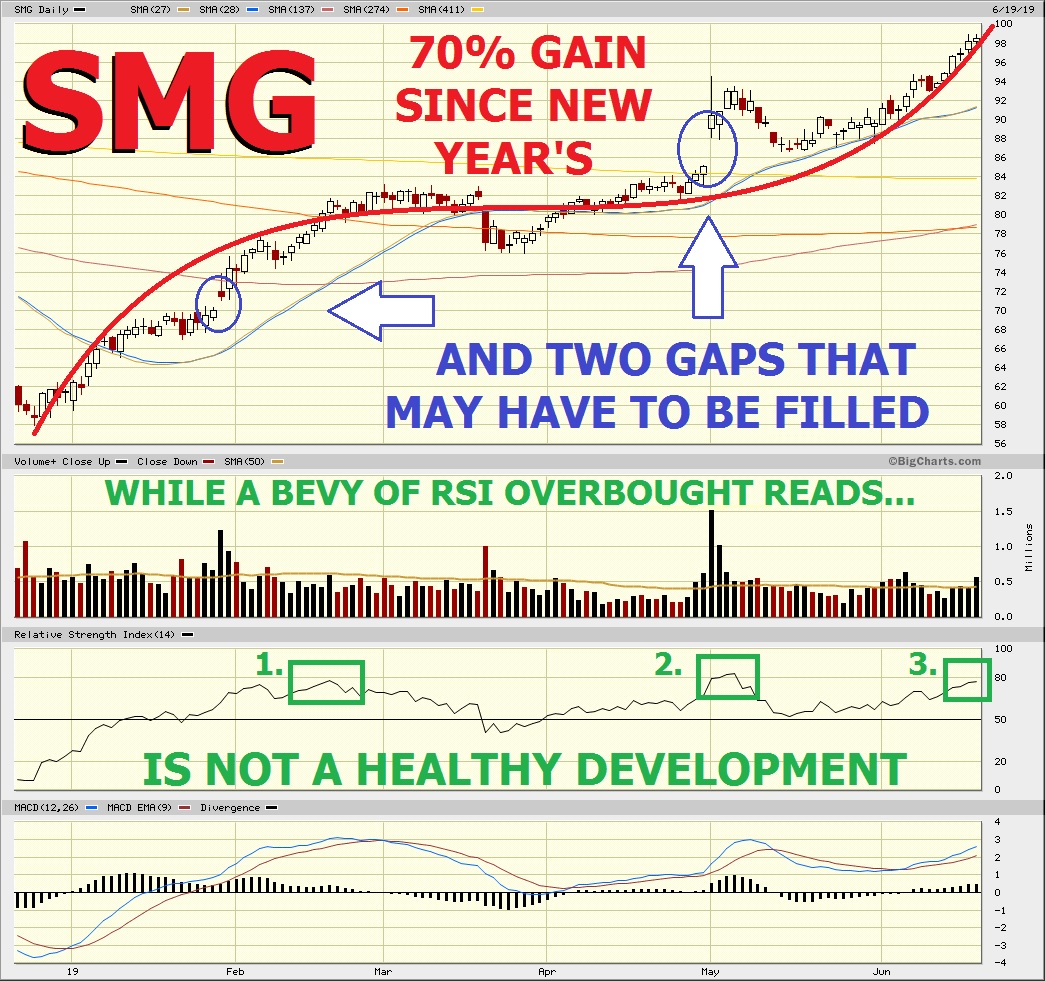 These are Scott’s shares since they bottomed in late December.

As you can see, they’ve tacked on 70% in that period, while three times registering either overbought or near overbought RSI readings (in green).

And that don’t much commend a stock to buyers, in our view.

Moreover, two gaps were opened during the climb (in blue), the last of which, at the very least, will have to be filled before the advance can continue. 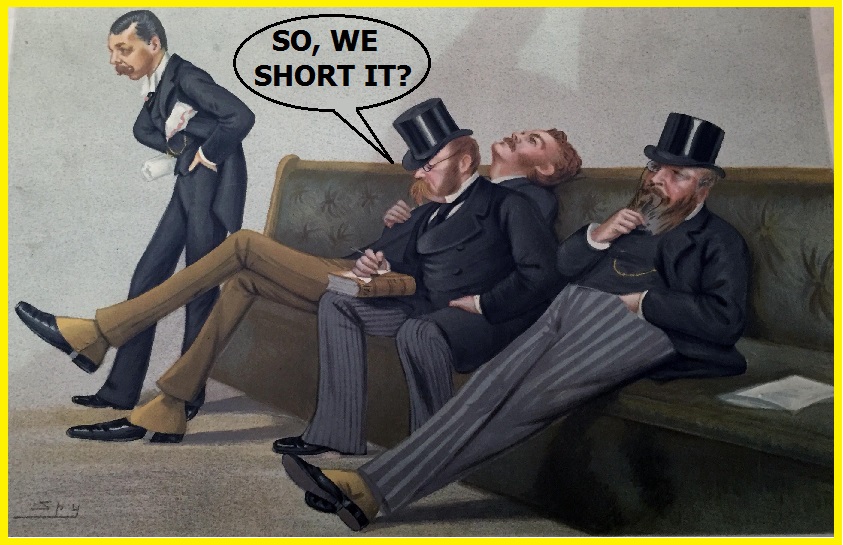 We have to admit that the company is incredibly profitable and well-run, but at current levels, the stock price is simply not justifiable.

Scott’s profits are inordinately dependent upon Roundup.  So it can’t be long before they go the way of the manufacturer, Bayer, whose shares have dumped by nearly 60% since the first judgment was issued against them.

And the Trade is…

« Previous Post
Genocide From the Right Side of the Brain

Next Post »
The Chart That Gave Jordy an Aneurysm (XLE,XLP,DIA,ERIE)