A broad sweep of the commodities reveals an asset class that’s not only suffering an 11th round bruising; it’s increasingly looking like the towel is about to be thrown in.

As we wrote back on March 27th in I Yell, Therefore I Am, the U.S. dollar was well on its way toward completing a bullish ascending triangle formation, a pattern we warned would have dire consequences for the commodities should it be completed.

As commodities, in general, move inversely to the dollar, and as the pattern was finalized just over a week ago, we  now expect the commodities to succumb. 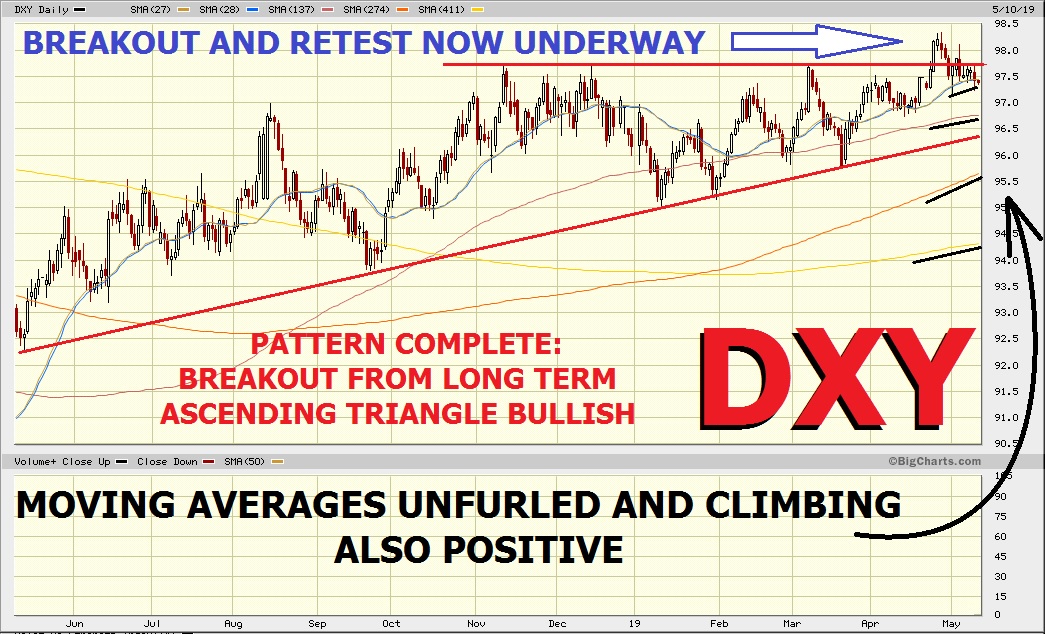 This is a year’s worth of the U.S. Dollar Basket (DXY), and it shows an unequivocal break above former resistance, now support, at 97.75.  There’s some play at the current level as traders retest the move, but in the weeks to come we expect to see a sustained rally for the dollar, and, concomitantly, a broad move lower for the ‘stuff’ class of investments.

How Do We Play it?

Before we get to today’s trade, we’re happy to announce that we have first to close down another open trade – and for a hefty take!

It was uploaded exactly a month ago, on April 11th, in a letter called Organic Producers Loaded for Bayer, wherein we urged you to consider buying shares of SFM (then trading for $21.58) and selling shares of BAYRY (then at $17.08) IN EQUAL NUMBERS.  Total debit on the affair was $450 per board lot traded.

We were negative on Bayer’s near term prospects, due to their Monsanto litigation woes, while Sprouts Farmers Market appeared ready for a break northward.

And so it came to pass.

For those who have a tick for annualizing their returns, your profit is a wide eyed 456%! 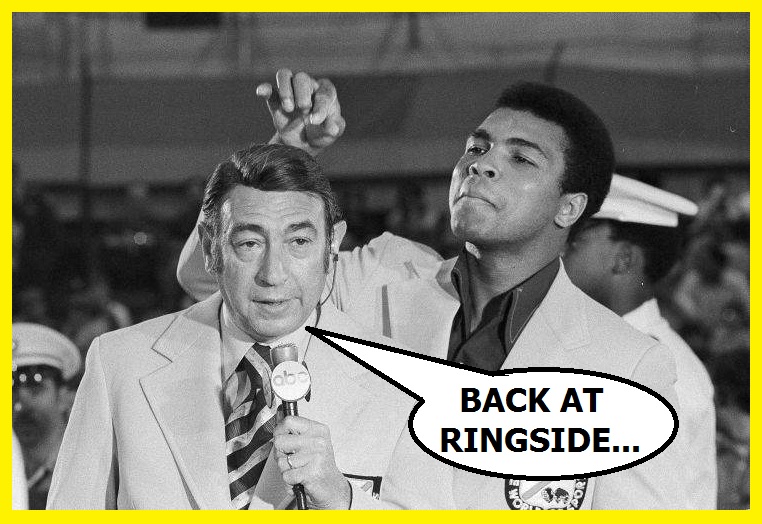 Where to now, Matty?

The above mentioned dollar strength, along with the latest delay in completing a trade deal, means Chinese demand for commodities will decline significantly in the near term.  Manufacturing in that country will also contract, and because they’re the world’s largest importer of metals, we’ll likely see an across-the-board decline for miners and manufacturers of industrial metals around the globe.

But more importantly, perhaps – demand for crude oil that fires those industries will also get hit.

And that’s where we’re turning for today’s trade.

Here’s a chart of the United States Oil Fund (NYSE:USO) for the last six months – 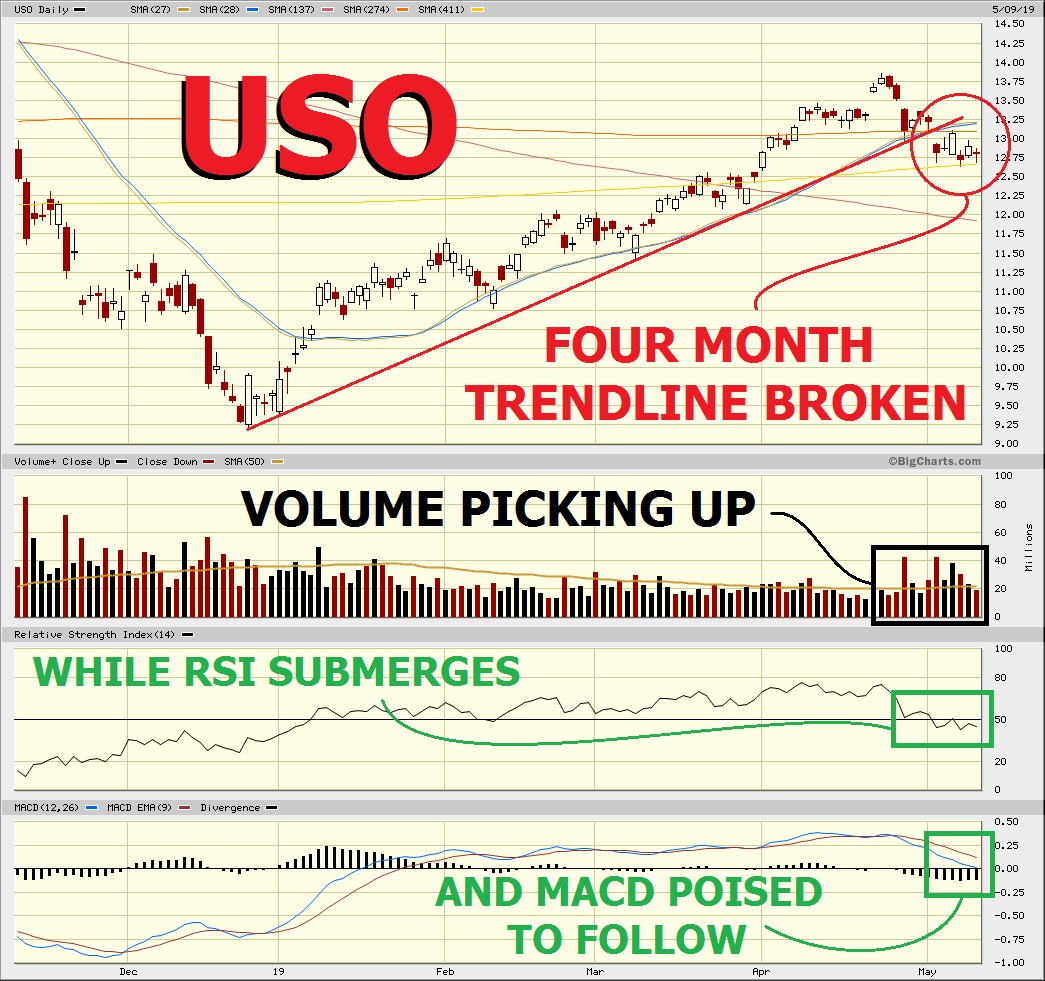 we say the goose is cooked for USO for the near term. 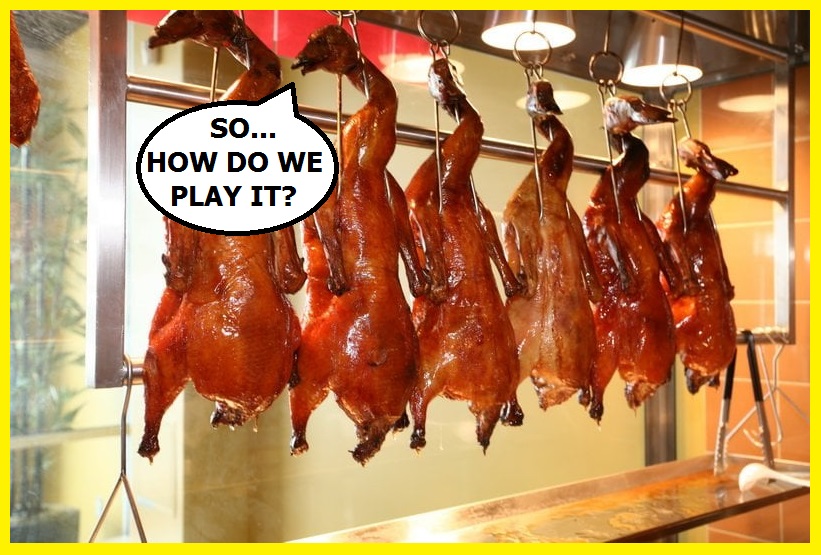 We’re setting it against the Invesco Deutsche Bank US Dollar Index Bullish Fund (NYSE:UUP).  And the details are like this…

Note, too, that the UUP CALL is in-the-money, while the USO CALL is a fat 10% out-of-the-money!