I’ve had it up to HERE with the Utilities! (NEE)

We spoke last week in this space of the inevitability of water becoming commoditized and selling one day on a futures exchange. 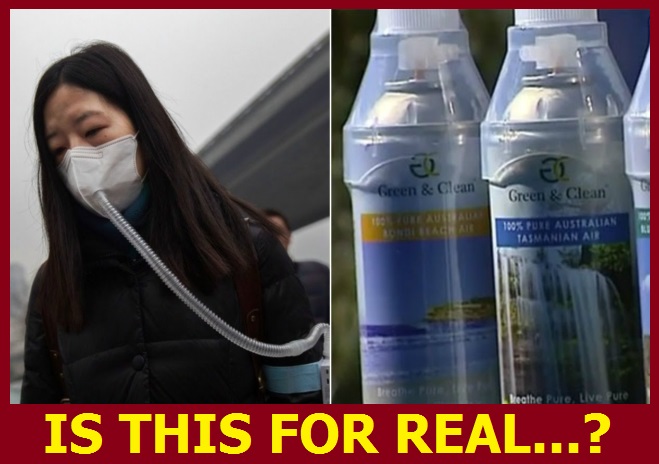 The sale and production of electricity, on the other hand, is already so highly regulated and industry margins so tight, that one might consider it already a commodity of sorts.

The truth of utilities investing has always been that there’s far less risk precisely because of that predictability.

There are some utilities, however, that are managing to sidestep the inevitability of incremental growth and government mandated pricing.

NextEra Energy, Inc. (NYSE:NEE) is one of them. 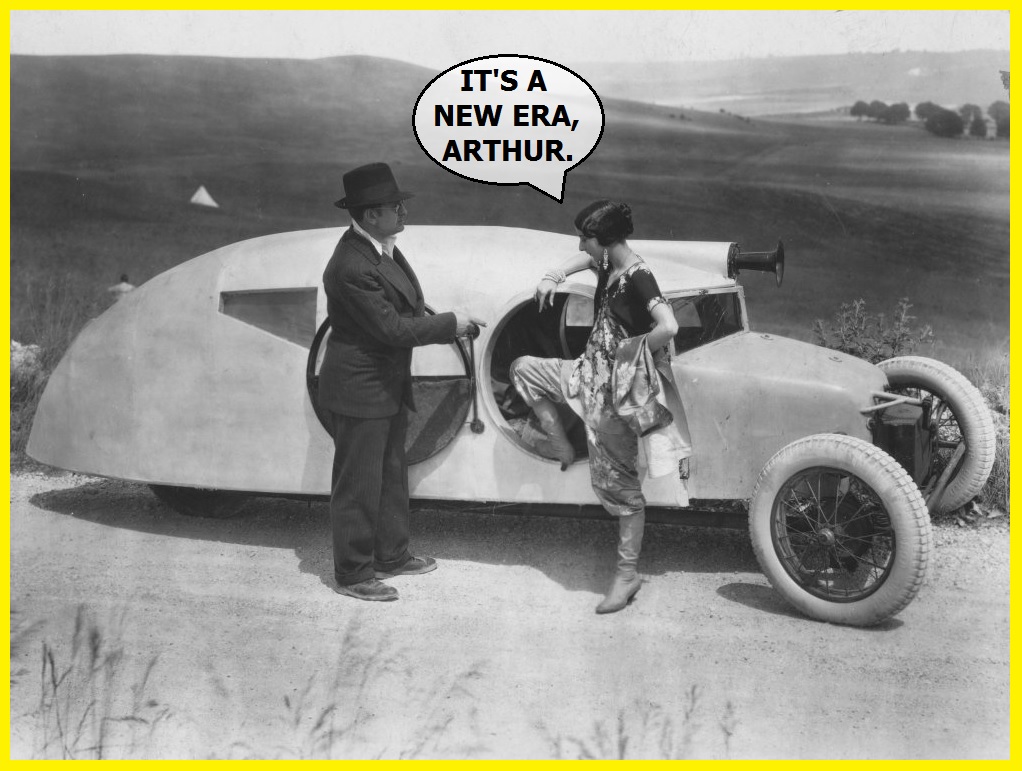 How are they doing it?

Without gettin’ nittin’ grittin’, NextEra has developed a side business – renewable energy.

They’re the world’s largest producer of wind and solar energy and have taken a leading role in the battery storage aspect of the business.

But there are problems.

First is the valuation of the company, which, regardless of the profits they’re turning from the renewable side, is still ridiculously high.

NEE has a market cap in excess of $107 billion, sells for 32x last year’s earnings and 3x Book.  Even with the 2.2% dividend (that they’re committed to growing), the stock looks very pricey. 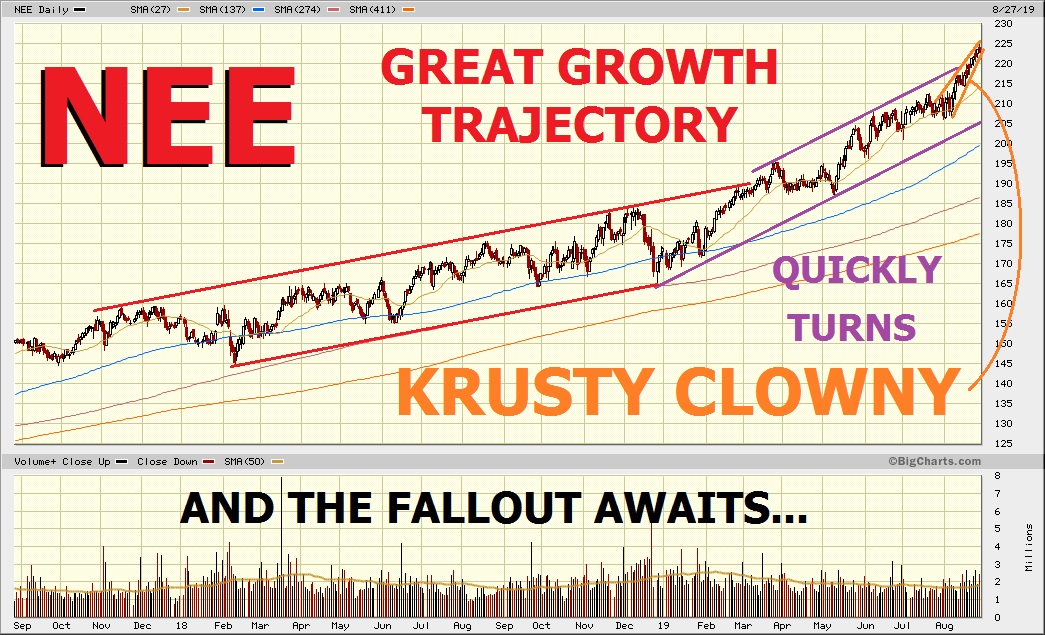 Now, while much of the latest upward impulse may be due to swiftly falling bond yields and a general flight to safety, the strength of the move, we believe, has been wildly exaggerated.

Is it wise to short the stock, then?

Or better just to bet on a lame performance going forward?

Our preference is to do something of both.

But first have a gander at the weekly chart – 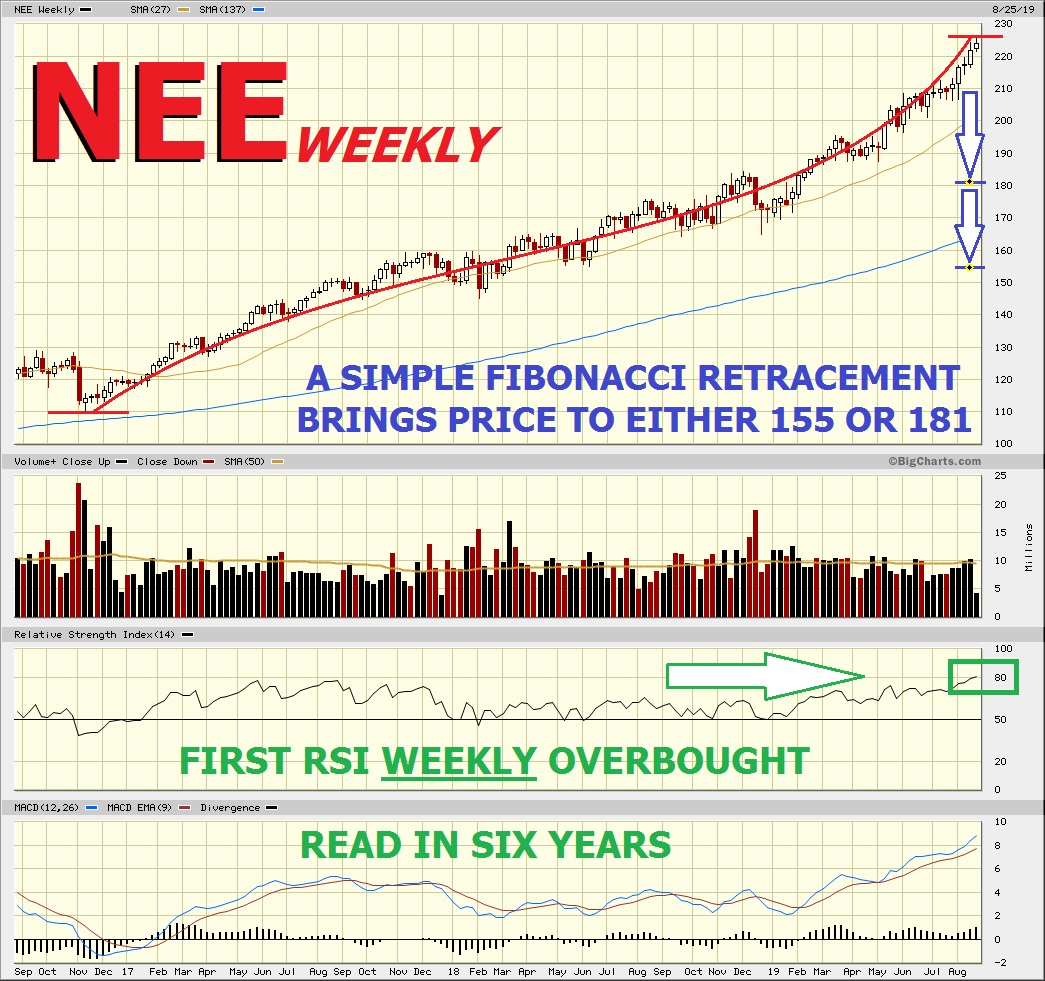 The most important aspect of the chart is the RSI weekly overbought indication, the stock’s first since 2013 (in green).

Which Leads to This:

Because of all the foregoing, it’s our very strong feeling that any combination of

would drop the price of bonds, utilities and precious metals through the floor, and send shares of NEE careening toward their simple Fibonacci retracement line at $181.

And because, in any event, we see little more upside for the stock at this stage, we’re playing it as follows –

« Previous Post
All You SMG Traders – Hold Tight! And Mind the Fakery!