A festive round of greetings on this first day of Chanuka to all our English-speaking brethren – and to the rest of the world, too, during this most holy season of debt servitude.

We want to address two separate issues today: the first is volatility compression and the second is sentiment.  But before we do, we’d be remiss if we didn’t give a shout-out to the staff and management down at Growler’s All-You-Can-Eat House of Beans for providing such a funky dining experience for this year’s A Jew and His Money annual holiday wassail.

We reserved the naturally-heated outdoor ‘bean tent’ for the event, and weren’t the least sorry for it.  With its fancy 5G ventilation and no-smother upholstery, we experienced there a most exquisite leguminous Elysium. 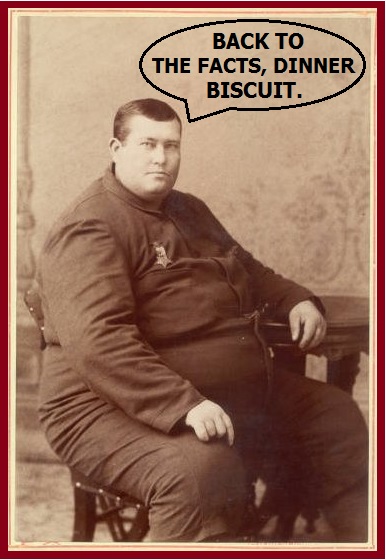 Volatility compression is currently running at levels we rarely – if ever – see.  And if history is any guide, that means we’re due shortly for some trouble.

For those unfamiliar, the quick and dirty on volatility compression, a phenomenon we brought to the public eye some fourteen years ago, can be found here.

Here’s a current chart of the CBOE VIX Index for the last three months, and it clearly shows a number of extraordinarily compressed VIX reads – heavily bunched over the last 20 trading sessions (in black) – 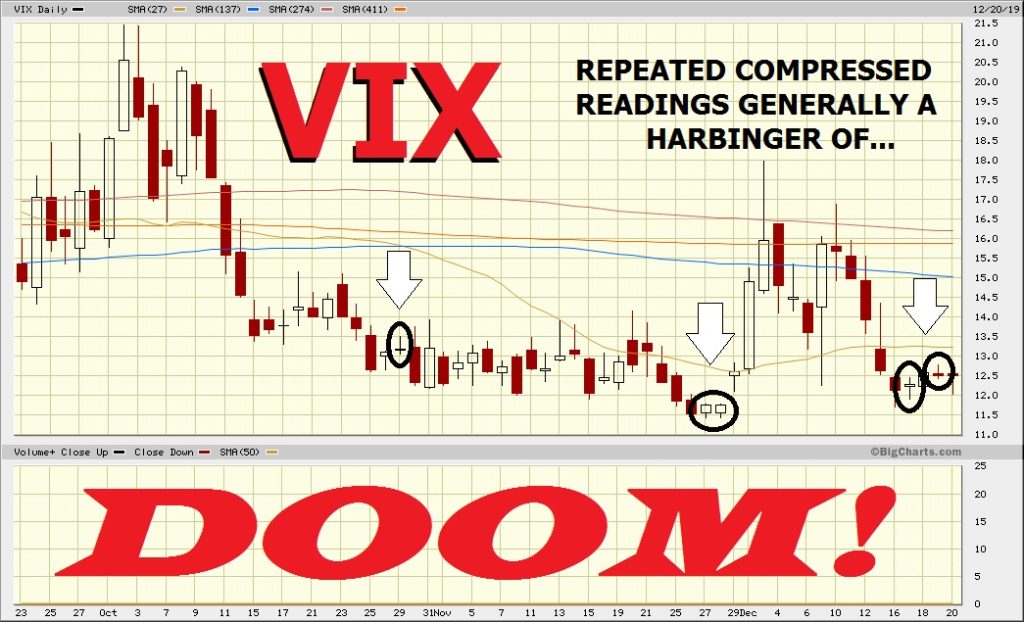 This is not a good sign, as history shows volatility spikes generally ensue from such clusters.

Taken together with Main Street’s new enthusiasm for stocks – now at levels unseen for fourteen months (below, in red) – and you have the recipe for a significant pullback. 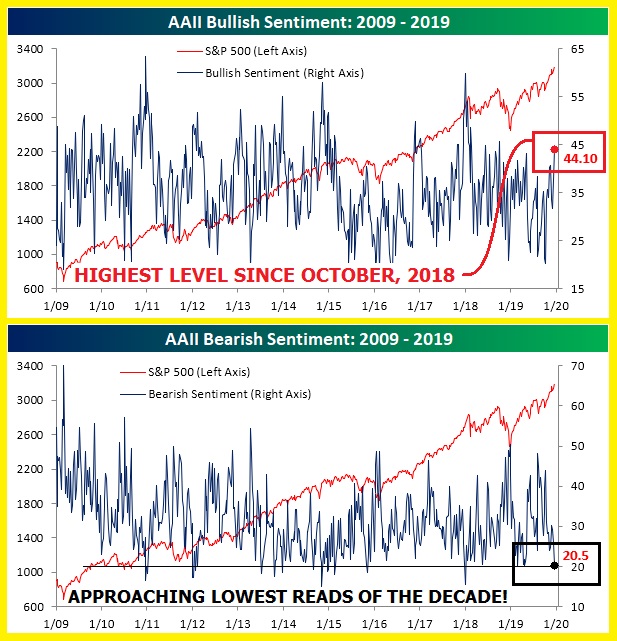 These are weekly figures provided by the American Association of Individual Investors (AAII), and they provide an excellent sampling of where buddy-boy is situated vis-à-vis the market.

And what are they saying?

In addition to the above noted bullishness, we have a corresponding dump in the number of naysayers.  As the lower chart shows, market bears have declined to among the worst levels registered since the market troughed in 2009.

And that’s not good.

As you’re aware, Joe six-pack sentiment is a contrarian indicator.

All of which leads us to the following…

The current rise in stocks has defied all but the most blind and incorrigible sybarites.  For the rest of us, there’s just disbelief.

And yet things could continue higher.  Who’s to say the Fed won’t push the limits of its interference?  Who’s to say the public (and the pros) won’t become entranced with the prospect of a genuinely positive first phase deal with China?  And maybe volatility will get absolutely smushed to record-low levels…?

And it’s for that reason we’re forced to play it as follows.

First, have a look at the following chart of the SPDR S&P Biotech ETF (NYSE:XBI), among the most overbought sectors of the market over the last quarter – 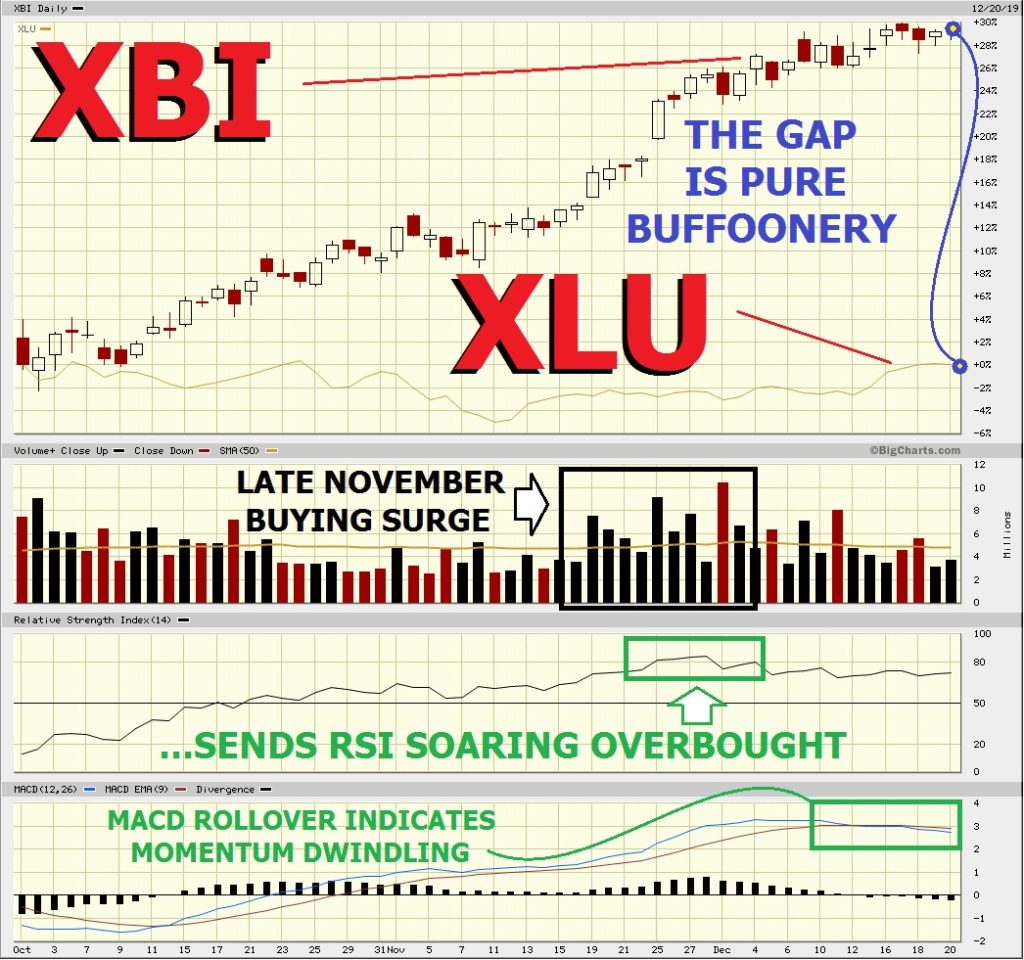 We’ve charted it against the utilities, represented by the Utilities Select Sector SPDR ETF (NYSE:XLU), to provide some perspective.

And as you can see, against the utilities barely holding their own in an overwhelmingly ‘risk-on’ trading environment, the biotechs have soared, tacking on 30% on strong volume while triggering an overbought RSI read that we believe marks their end (in green).

We’re therefore expecting weaker prices from XBI and, potentially, a great deal of profit taking should the indexes retreat.

In either case, the gap between the utility and the biotech realms will close. 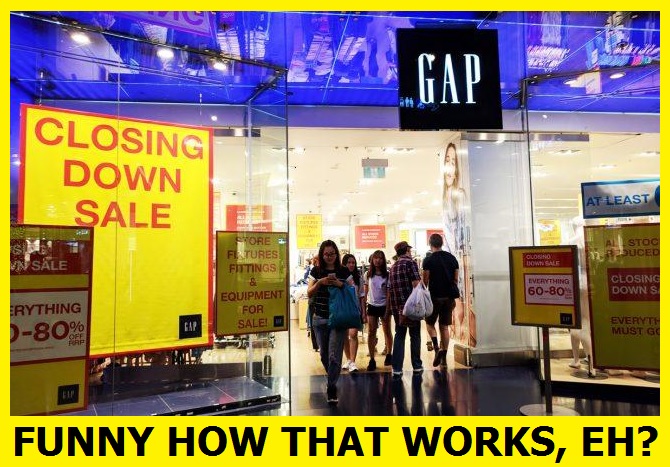 With kind regards for a safe and happy holiday,

Next Post »
TRADE BULLETIN: Three Trades Closing (XLE/GDX,LHX,NEE), and Not a Moment Too Soon!