We’re going online to sell the seller today, close up the shop and shut down the store.  It’s a trade that has the potential to bring in liquidation profits, so we encourage you to follow the bouncing ball and keep your feet and hands clean. 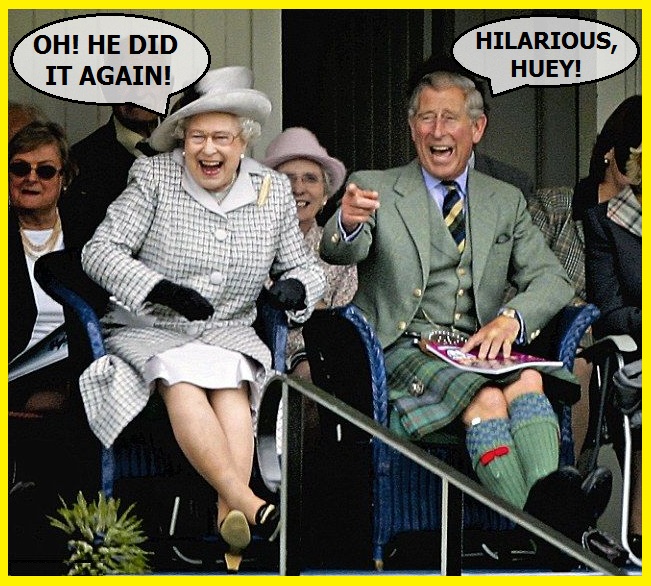 But before we get there we have a lovely trade to close.

It was opened less than three weeks ago in a letter called A Flagon ‘O the Forty Weight for Every Farmer, wherein we urged you to buy shares of FARM at the market (then trading for $14.22) and sell an equal number of DBC shares at the market (then at $15.44).  Total credit on the trade was $1.22.

As we expected, coffee has surged.  And with it, so, too, did shares of Farmer Bros.

As of Friday’s close, FARM shares traded for $16.29 while DBC still sits at $15.61.  Sell the former and buy back the latter and you come away with your hands dripping green.  Total take is $1.90 on nothing laid out.  Adjusted for minimal commissions gives you a haul of 1167% in 17 days.

And with winter coming in, that should pay for a bottle or two o’ the yummy tum rum. 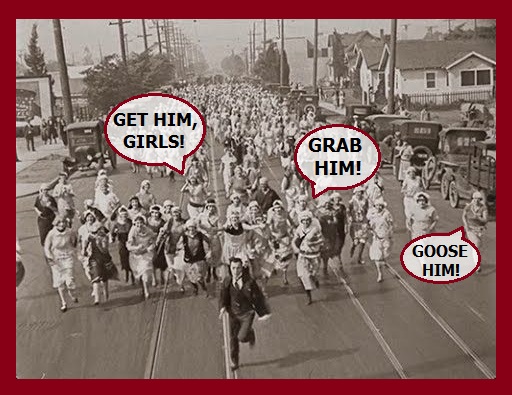 Good on ya if you went in big.

And now for this week’s bet.

Friends, it’s rare we see a market this stretched.

We’ve mentioned this a few times over the last week, but it bears repeating.  The regular ups and downs that form the market’s intermediate trend often provide clues as to when those moves have grown long in the tooth and are due to reverse.

Today, by every metric we follow, a downturn is imminent…

Yet it hasn’t happened.

Either way, we have to stick to our knitting.  Despite the Fed, despite jawboning from the White House and despite the go-go algos, we’re going to trust what our numbers are telling us – that a 5% to 10% slide is NOW in the offing.

And now we cut to the chase.

When the slide comes, weak stocks will suffer more than those who’ve led the pack, and that’s why we’re targeting Shopify Inc. (NYSE:SHOP), the Canadian based e-commerce platform that’s sucking wind as the rest of the market ascends its Everest. 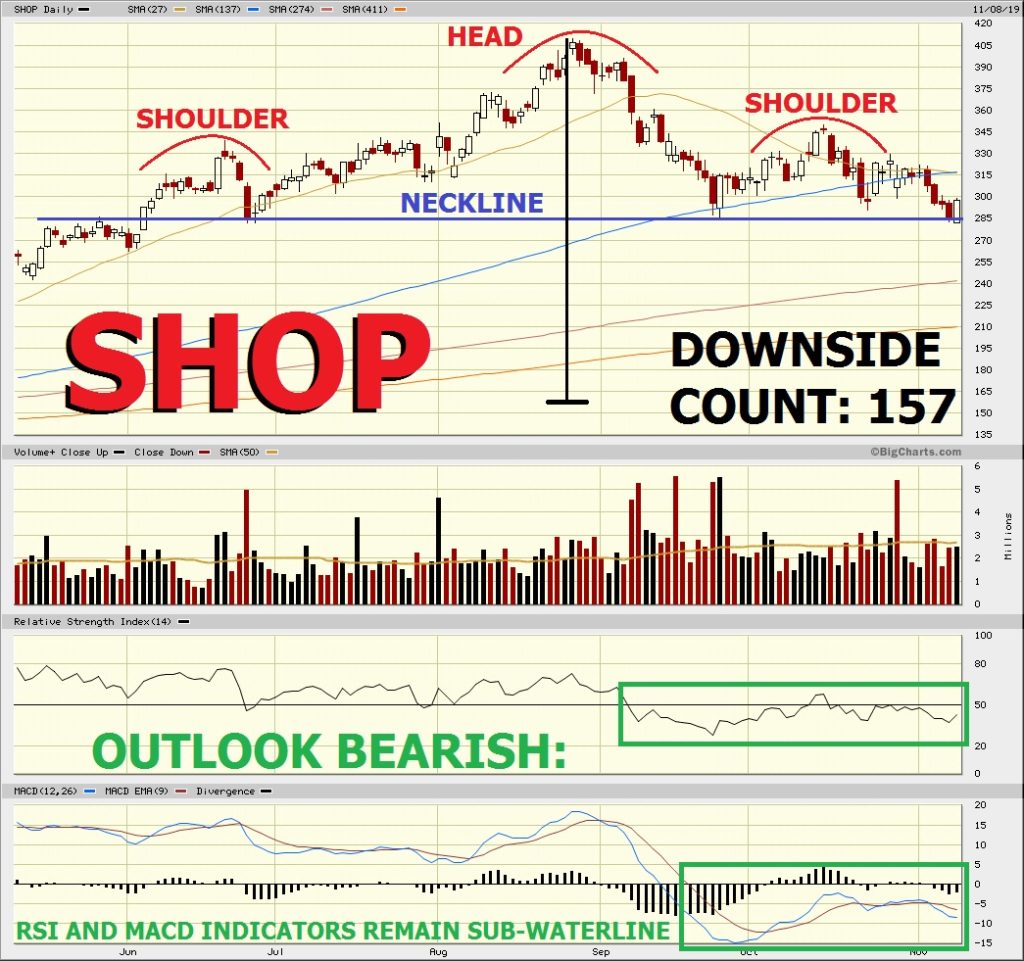 Two items to note on the daily chart.

Any weakness from here would likely bring a cascade of technical selling.  Of course, any general market decline – of the sort we’re expecting – would also open up the SHOP selling floodgates.

The downside count for SHOP shares is 157!

Could it really happen?  That’s a long way down.

It pays no dividend.

Take a look now at the stock’s weekly chart – 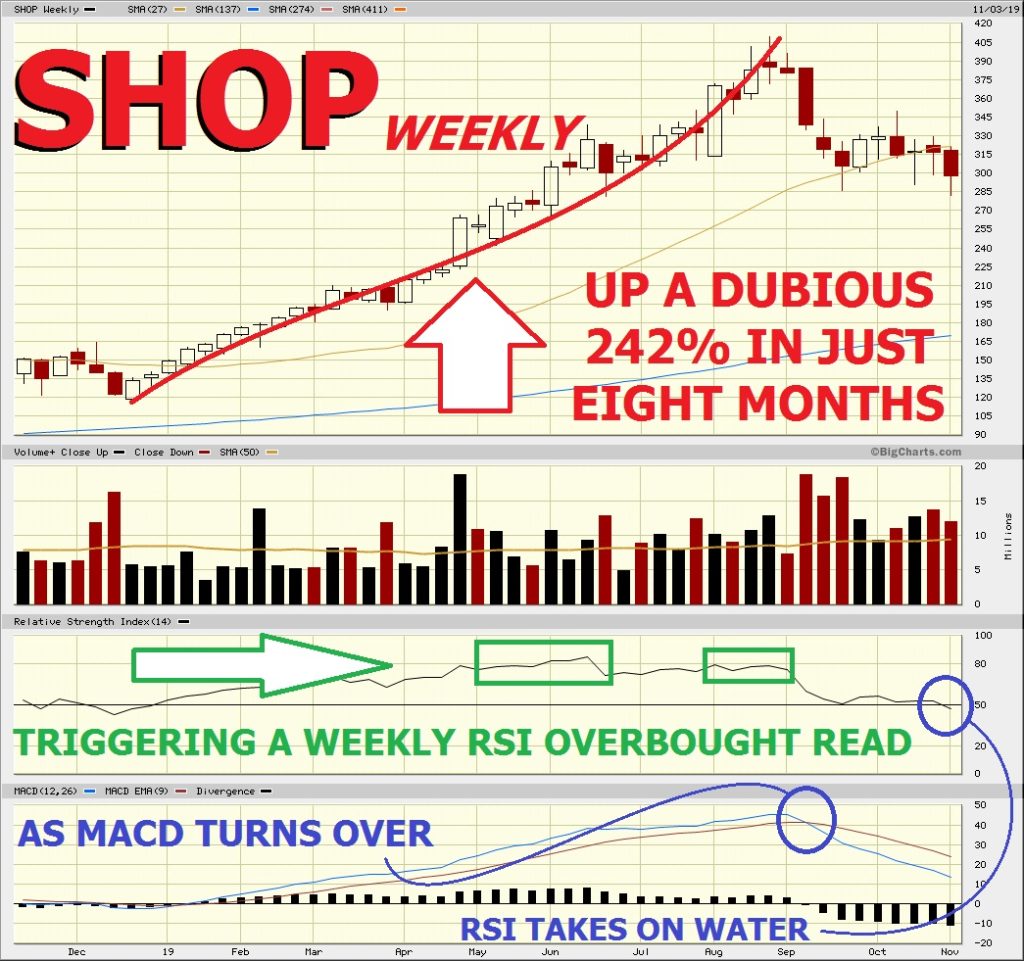 Here we see the broader picture.

In short, the writing on this shop’s wall has been written, and it’s screaming SELL in a rather bold, condensed font.

That’s why we’re moving as follows –