Down to Your Last Nickel! (XLU,XLV)

Are you a betting man…?

So much of what happens in today’s market-casino is generated by constantly re-optimizing computer algorithms that the biggest banks and brokerages have developed the better to game the system.

And yet, because the market has such a myriad of inputs, and can therefore never be perfectly modeled, those same computerized trading bots are only as capable of turning a buck as the Bunny Dumplings that program them. 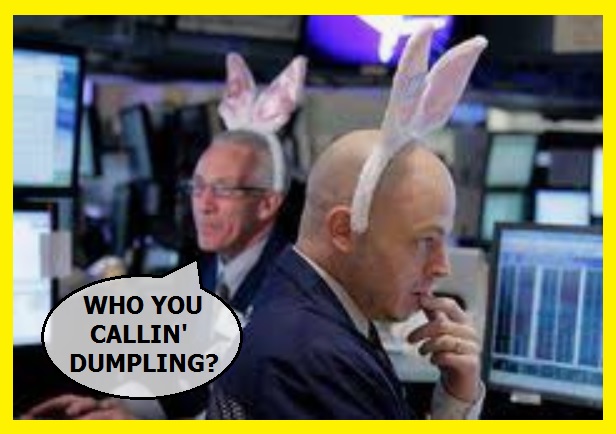 And it’s with that in mind that we arrive at this week’s trade.

Because for all the analysis and post-game follow-up, and all the play-calling that comes down from the “booth”, it’s our firm contention that the guys who know the action best are the ones on the field, in the trenches, bleeding from the hand, torn, beaten and bruised.

Put a dress on him if you want, but the quarterback has a better feel for what’s gonna go on a fourth quarter third-and-eight than the spotter up in the blimp. 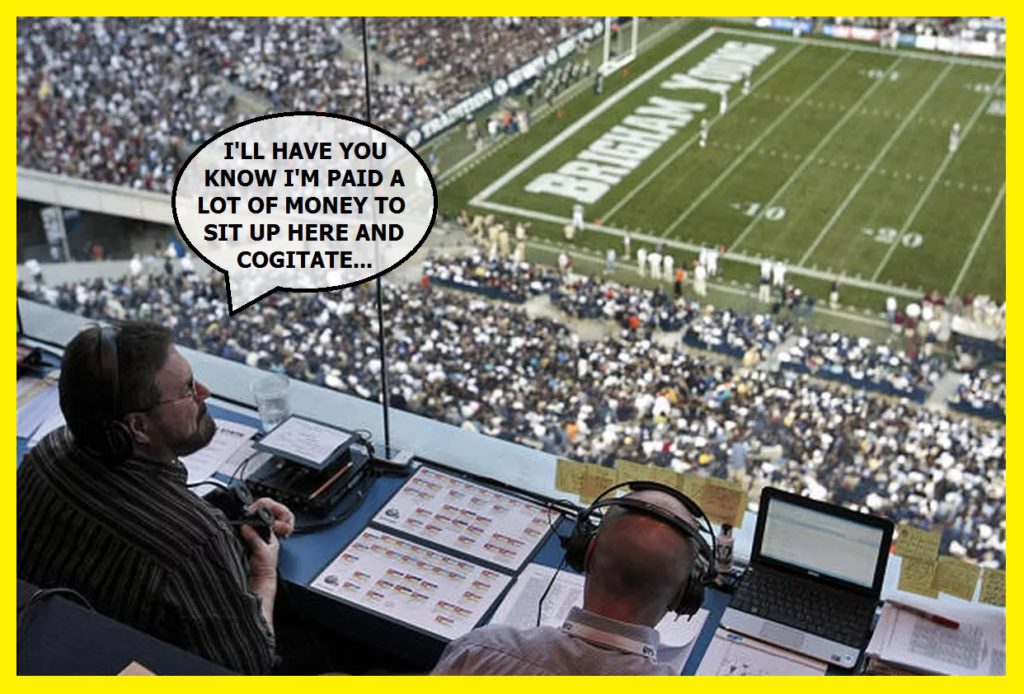 And for us in the market bowl, that means price and volume tell the tale.

The technicals, friends, shall set you free.

And this week, they’re telling us that market direction is … unknown.

Shame on you!  What kind of service are you providing here!?

We’re not ashamed to say that the latest actions of the Fed have thrown a wrench the size of Rwanda into the stock mix this month.  In fact, we’ve never seen such a stretch of overbought indications from our proprietary Sentimeter as we’ve received since the end of October.

Our best intelligence is telling us to SELL, again and again, but the market is not retreating.  And there’s little question that the nearly half a trillion dollars the Fed has decided to pump into markets of late has turned all logic, analysis (and math) on its head.

And it’s for that reason we’re forced to take a very different tack for this week’s initiative. 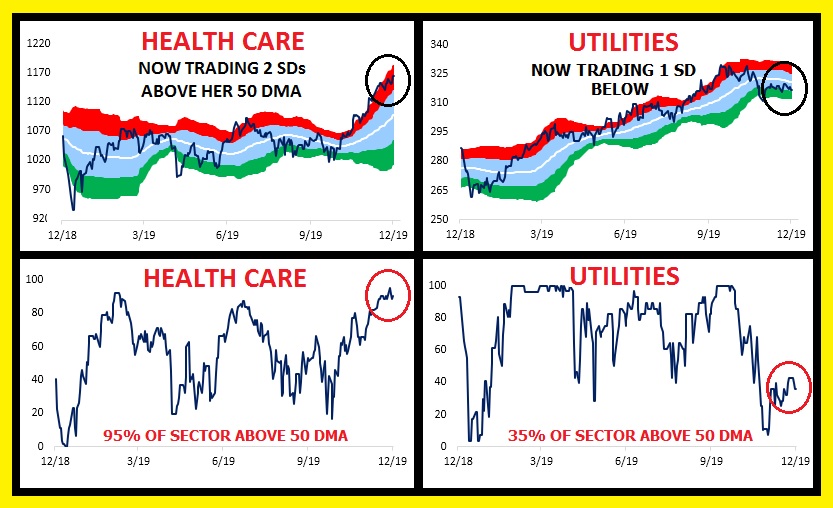 This is a look at two sectors’ trade for the last year, Health Care and Utilities, with

And the results are plain.

Health Care is currently by far the most expensive sector in the market, trending a full two standard deviations above its 50 DMA, with a full 95% of Health Care stocks trending above their 50 DMAs.

Utilities, on the other hand, are currently the cheapest group in the S&P 500, relatively, with the full sector trading one standard deviation below its 50 DMA and a mere 35% of those individual stocks that comprise the sector above their respective 50 DMAs.

That is to say, the latest action in the market has been entirely “risk on”, a development that accounts for the underperformance of the Utilities, traditionally the playing field of widows, orphans and the rest of the investing world’s Raskolnikovs.

The following chart bears witness to the sometime inverse correlation between the two groups – but more importantly for us, to the vast outperformance of the Health Care sector since the Fed began pumping its love juice into the system at end October. 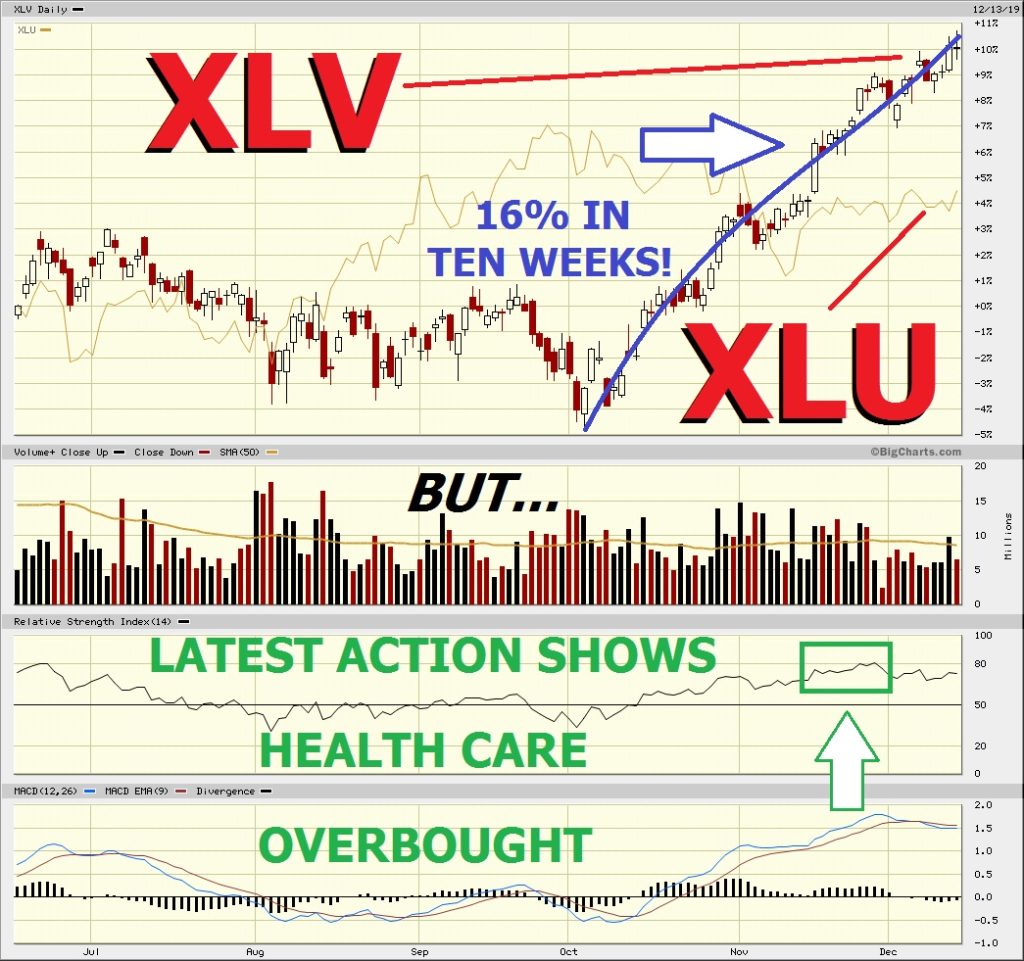 After an exceedingly quick burst higher (in blue), Health Care posted an RSI overbought 80 read in late November (in green), after which volume in the stock diminished appreciably.

It’s therefore our pigheaded belief that if there’s a pullback or stall in the broad market ahead of us, XLV will suffer far more than the Utilities.

And that’s precisely how we’re framing the trade.

Next Post »
TRADE BULLETIN: Shut Down Your Alaskan Cruise Trade (12/9) Before She Leaps Off a Glacier! (TLT/HYG) and… The Importance of Proper Thinking