Honeywell’s Lid Adds to the Odds That the Bid’s Hit The Skids (HON,KSS)

There comes a time in every profitable business’s life when it has to admit that although the operation is smooth-running and turning a gangbuster profit, the stock valuation is a wee bit stretched. 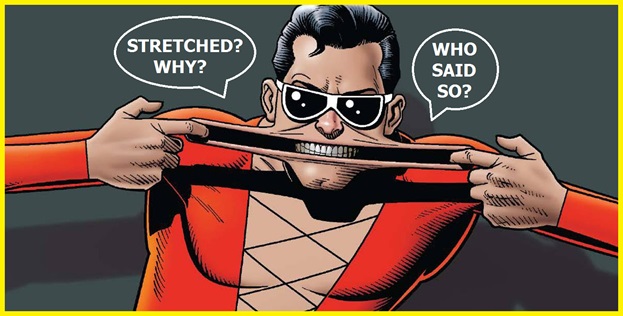 So it is with Honeywell (NYSE:HON), makers of everything aerospace, robotic and automated.

It’s a fairly straightforward story: the stock shot higher on increased sales and lower taxes, feels optimistic about its second half, and has outperformed the Dow Industrials by a wide margin.

But a look at the charts shows there’s been a wee bit too much heat, and that’s why we’re zeroing in on her today.

We’re going to take a look at both the daily and weekly charts, because, combined, they offer us a blue-sky picture of impending annihilation.

This is the daily – 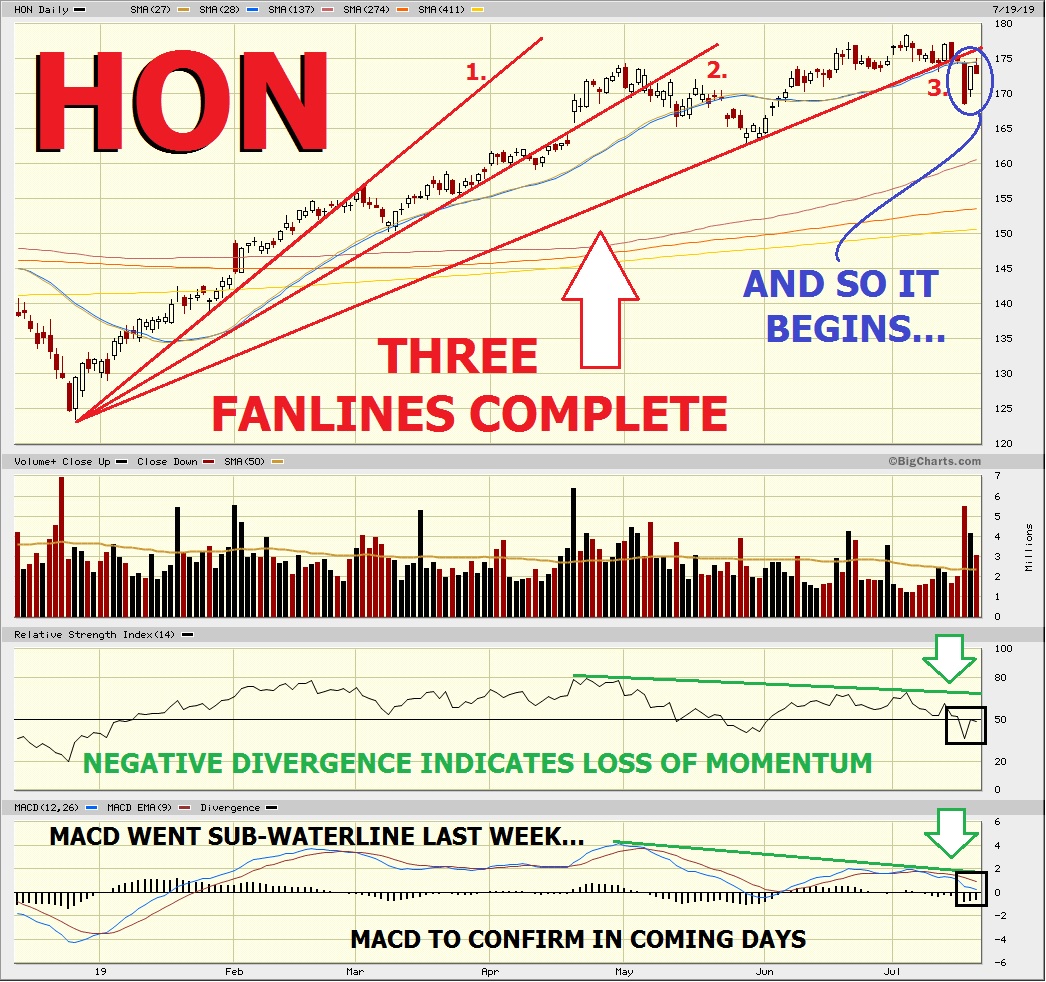 Whether the change lasts a few weeks or a few months or longer is not known.  The downside here is a moving target that we’ll be assessing according to the speed of the move and the volume that accompanies it.

But it don’t look good.

Have a peek now at the weekly chart for Honeybunch – 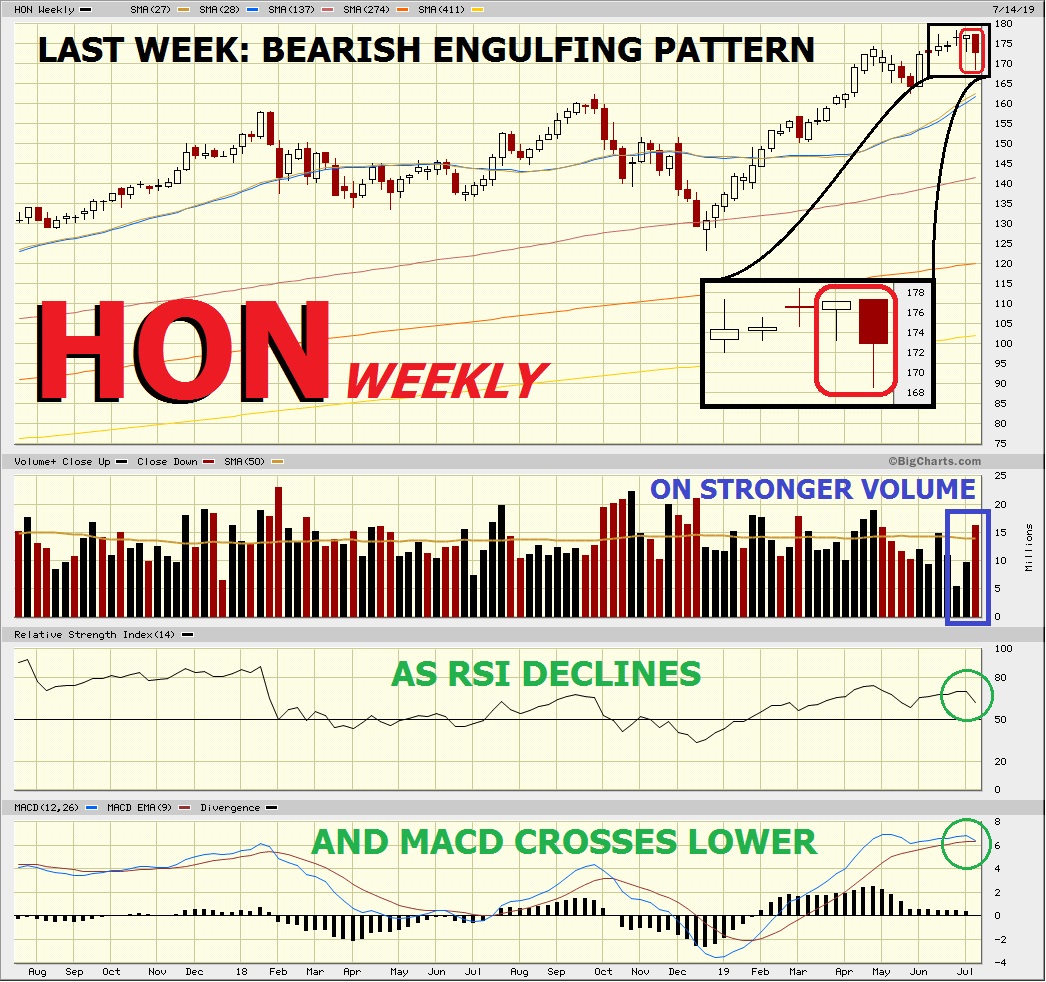 Last week’s action brought a bearish engulfing pattern (seen in the black blow-up), a devilishly unfriendly indication – particularly when it appears on a weekly chart.

It occurred on better than average volume (in blue), while a MACD cross lower only added to the odds that we’re in for a jitterbug groove of selling.

Why Kiss The Mirror?

But we’re not about to make a straight up short call on Honeywell shares, because that’s simply too expensive a proposition.

Instead, we’re going to match her with one of the most beaten up stocks in the most shorted sector of the entire stock universe – the retailers.

The catfish in a halter-top today is Kohl’s (NYSE:KSS), a major department store whose stock has been draggin’ its arse along the river bottom for better than six weeks now and is due for a quick pop higher. 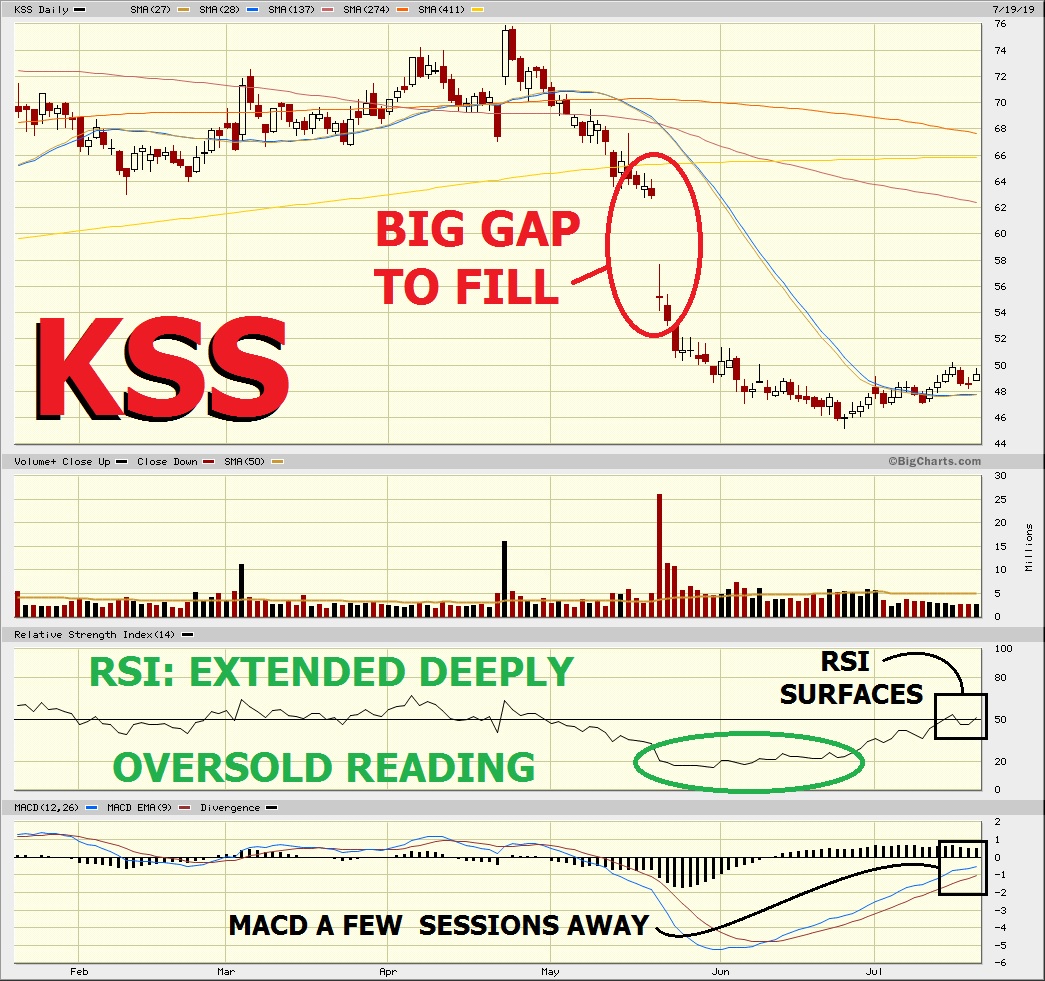 The technicals here show a stock just waiting to fly.

Can anyone say ‘short squeeze’?

We’re facing these two corporate behemoths against one anther in what amounts to a Godzilla vs Rodan cage rematch, and we’ll bet Auntie Mabel’s blue mantelpiece vase that we’re gonna win.

Next Post »
Are you now, or have you ever been, a victim of… REVENGE MACRAME?

2 responses to “Honeywell’s Lid Adds to the Odds That the Bid’s Hit The Skids (HON,KSS)”