It Takes a Village… Idiot (AAPL,TLT)

A little friendly advice to begin…

Clarence Darrow once wrote that –

“A criminal is a person with predatory instincts without sufficient capital to form a corporation.”

And he was certainly on to something.

But we’d like extend it a step further to include anyone “…without the wherewithal to get himself elected.”

And if we might importune upon our good reader with a further admonition – that anyone who aspires to a position higher than the pie-baking group of the local welcoming committee should be viewed with extreme prejudice, and is more than likely a sociopath, if not worse. 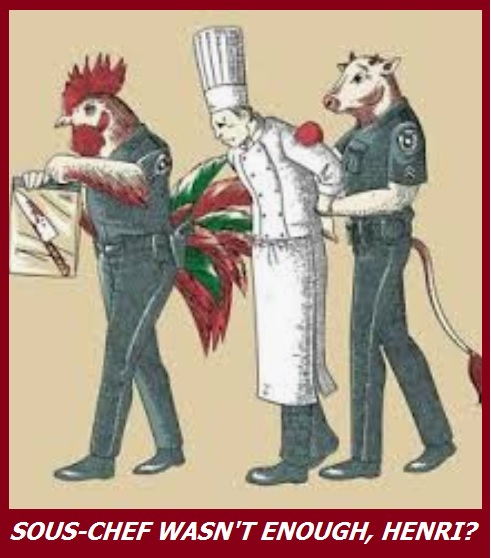 We’ve got a bang-up trade for you this morning, friends.  It involves one of the five largest companies by market cap in the U.S. of A. – Apple Inc. (NASDAQ:AAPL).

Incidentally, those five companies are comprised of Facebook, Microsoft, Apple, Google and Amazon.

Or, as Hillary likes to put it – 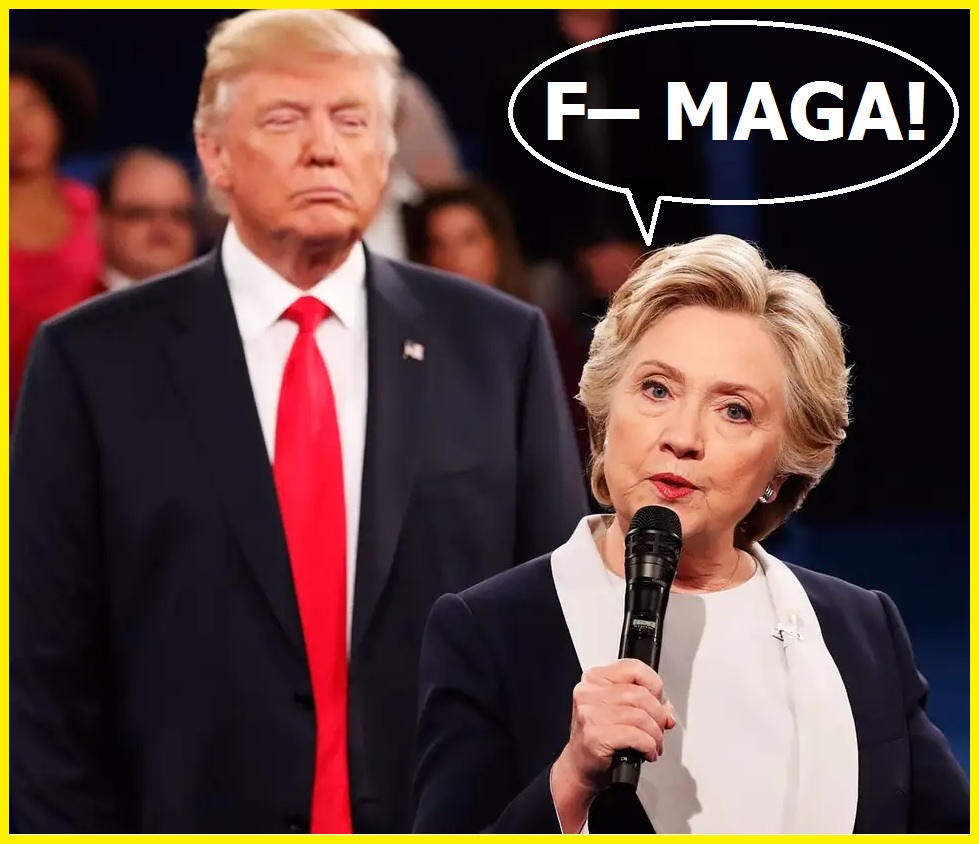 Funny the way that works out….

Anyway, Apple is currently trading at the top end of analyst estimates, and we’ve had two downgrades since just New Year’s.

But more than that, the technical picture is miserable.

This is the last six months’ truck on the stock –

Yes, AAPL has risen like a phoenix, but she appears destined for another fiery flameout within days.

As we’ve discussed here many times, an RSI overbought read presents a danger to investors.

But a weekly overbought is outright carcinogenic.

If you’re an Apple long at this stage, it’s probably better not to take a bite of your profits, but to pull out Aunt Betty’s Nutmeg Apple Crumble recipe and make a family-sized batch of it all. 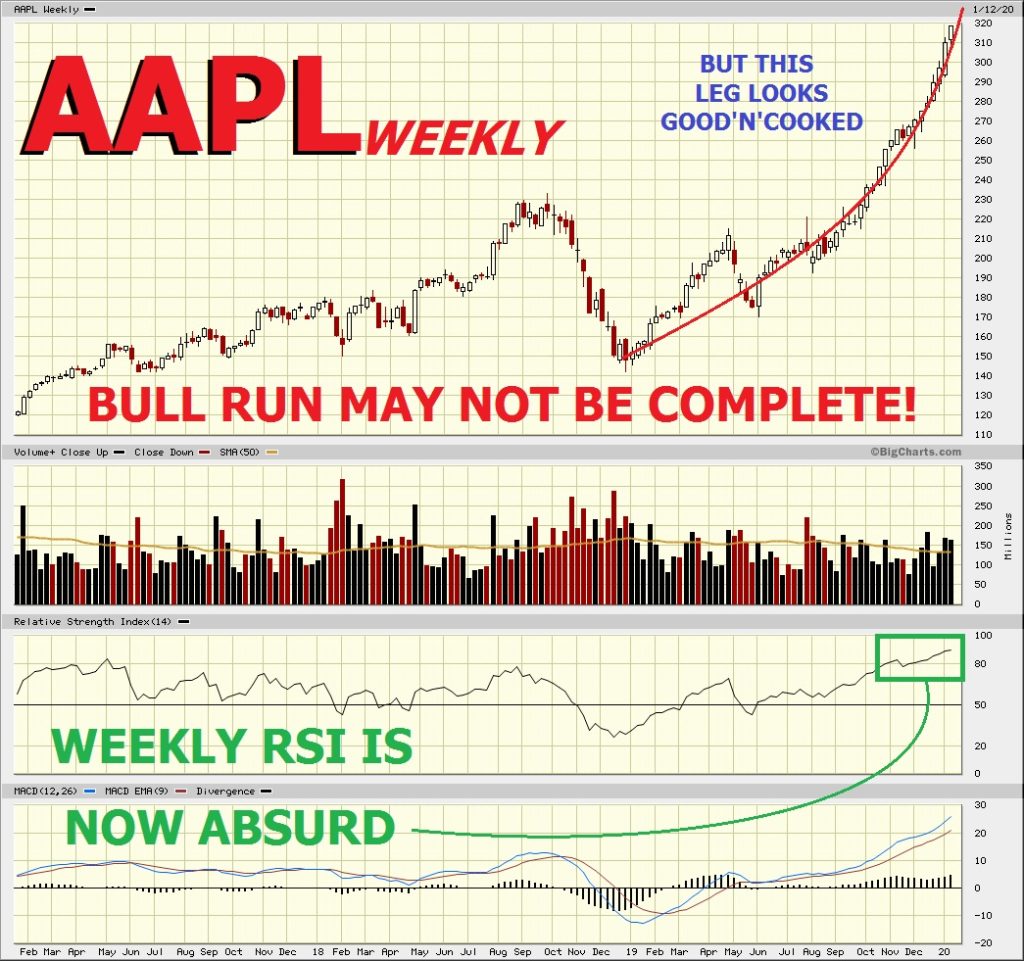 How do we play it, Huey?

Apple may have higher highs waiting down the road, but the current jig is up.

Fact is, investors as a whole are in risk-taking mode.  And that’s a dangerous phenomenon.  When it occurs, it’s best to keep your distance and prepare for a rotation into a safe haven asset when the screaming begins.

And that’s precisely how we’re playing it.

We’re pairing Apple with the long bond, as represented by the iShares 20+ Year Treasury Bond ETF (NYSE:TLT), because the disparity between the two is almost comic. 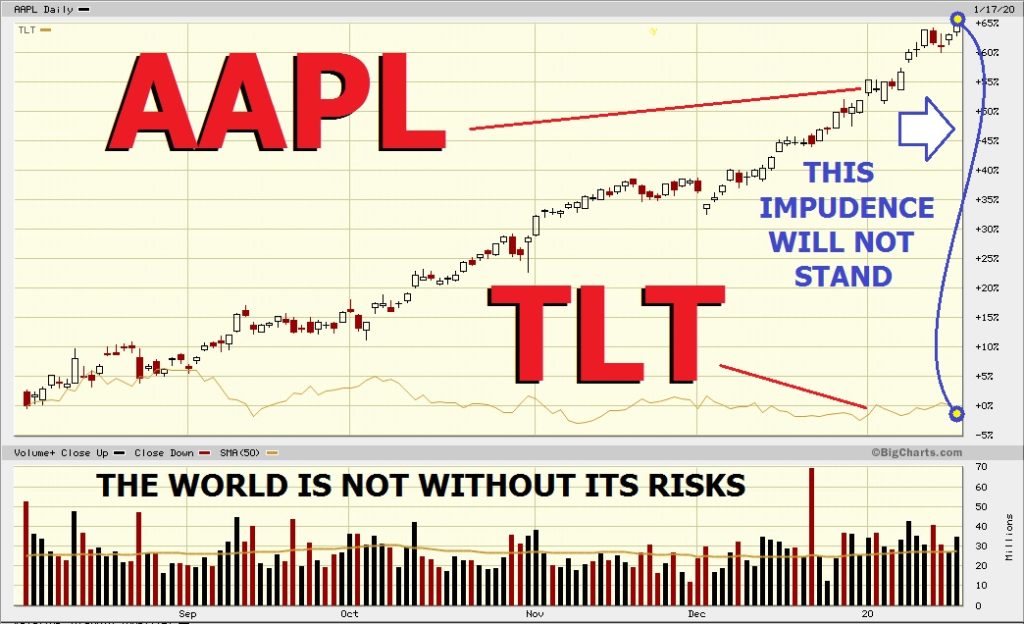 When the snap-back comes, we’ll see a good take from this pairing.