LKQ Will Trade in a Range (LKQ,BMRN)

We’ve got an open trade to deal with today, and, as usual, a new one to offer.  But first an important message from G-d…

A week from today, the Jewish New Year rings in, and if you haven’t made a thorough accounting of where you’ve been and where you still need to go, you’re in for a whale of a mess.

Because as our colleague, Alan B. Harvard, will discuss later in the week, the outgoing year – as  well as the incoming new one (2019/20) – will be characterized by “stampedes and trampling”.

Again, Alan will be digging deeper into the details, so we don’t want to give away too much.  Suffice to say, that according to the basic kabbalah of the matter, these two themes will be dominant throughout the year, and should already be robust, ubiquitous and active in the weeks ahead.

So don’t get too comfortable, Jimmy.  And do start that aforementioned accounting.

Or, as a wise man once said – CHANGE YOUR LIFE!

Because we can already hear those elephants a’rumblin’… 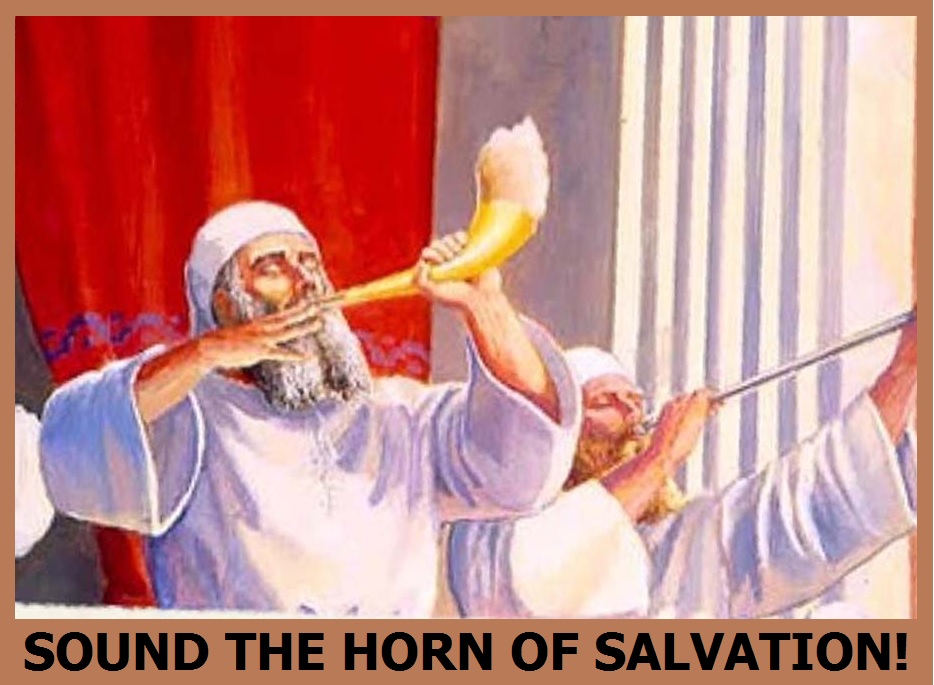 That said, A Jew and His Money will not be in operation next week, as we’ll be celebrating the incoming High Holiday of Rosh HaShana.  Count on us returning the following week, of course, and keep an eye on Alan’s Climbing the Wall of Redemption blog for news and updates regarding trade closures and more.

And now we begin.

We opened a pairs trade in the healthcare space a’way back on the 7th of July.  The letter was called Twice in One Month: Dressing for Healthcare Success, and there we urged you to buy the BMRN Oct 18th 60 PUT for $0.65 and sell the XLV October 18TH 85 PUT for $0.68.  Total credit on the trade was $0.03.

We’re buying back the short XLV PUT, even though it hasn’t moved much and will cost us a full $0.54 to neutralize.

That said, we do it with the expectation that a general move lower over the next few days (a stampede…?) will bring us handsome reward – without risking a loss on the short side. 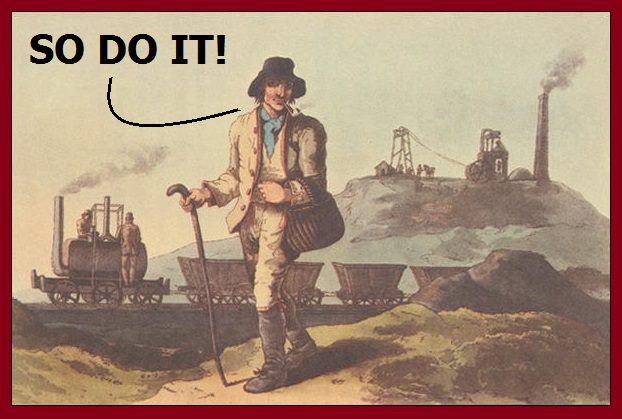 This week’s trade looks very smart on paper, and should it deliver, will render your bank account absolutely glamorous.

It’s based on auto parts replacement giant LKQ Corp. (NASDAQ:LKQ), and it’s all in the charts, friends.

So let’s start with the big picture – the monthly chart going back a decade. 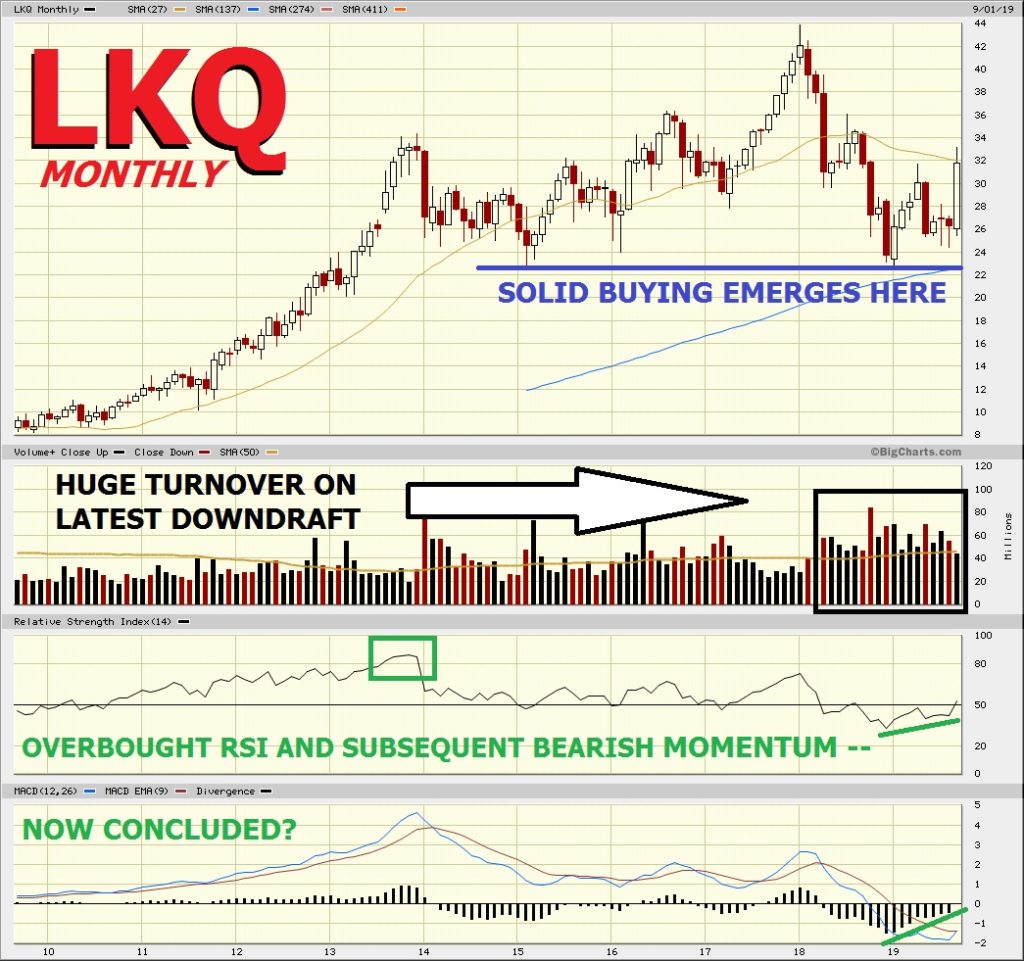 We offer the chart as a means of demonstrating that the overbought monthly RSI reading from five years back appears to have been worked off in full (in green), with strong support emerging at $23 (in blue).

Strong volume figures over the last year (in black) are also a sign of accumulation.  The stock is moving into stronger hands.  And that’s bullish.

But with RSI again above her midway waterline and MACD still well below (also in green), we may be in for a longer term consolidation rather than an outright shoot-the-moon rise going forward.

And Now the Weekly – 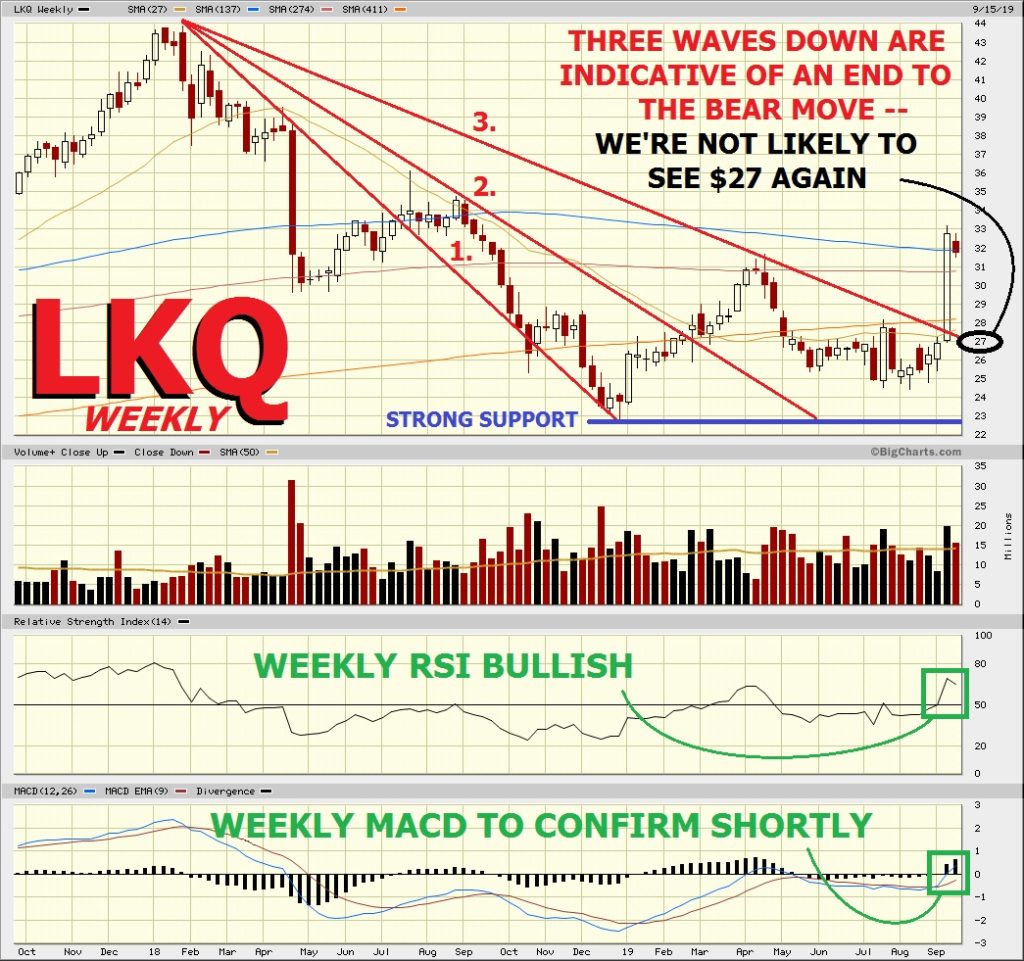 Here, we have a picture of two years’ worth of predominantly bearish action, but lots of positive indications going forward.

Taken together, these three items reveal the worst of the bear to be over, and while we may see a consolidation here, it’s unlikely we’ll drift below all the rising MAs.

As for the stock moving into stronger hands, the price pop you see from last week (far right) came on news that activist investor Jeffrey Ubben and friends at ValueAct Capital had just taken a 5.2% stake in LKQ.

Finally, the daily chart, where we clearly see the strength of the last three weeks’ trade – 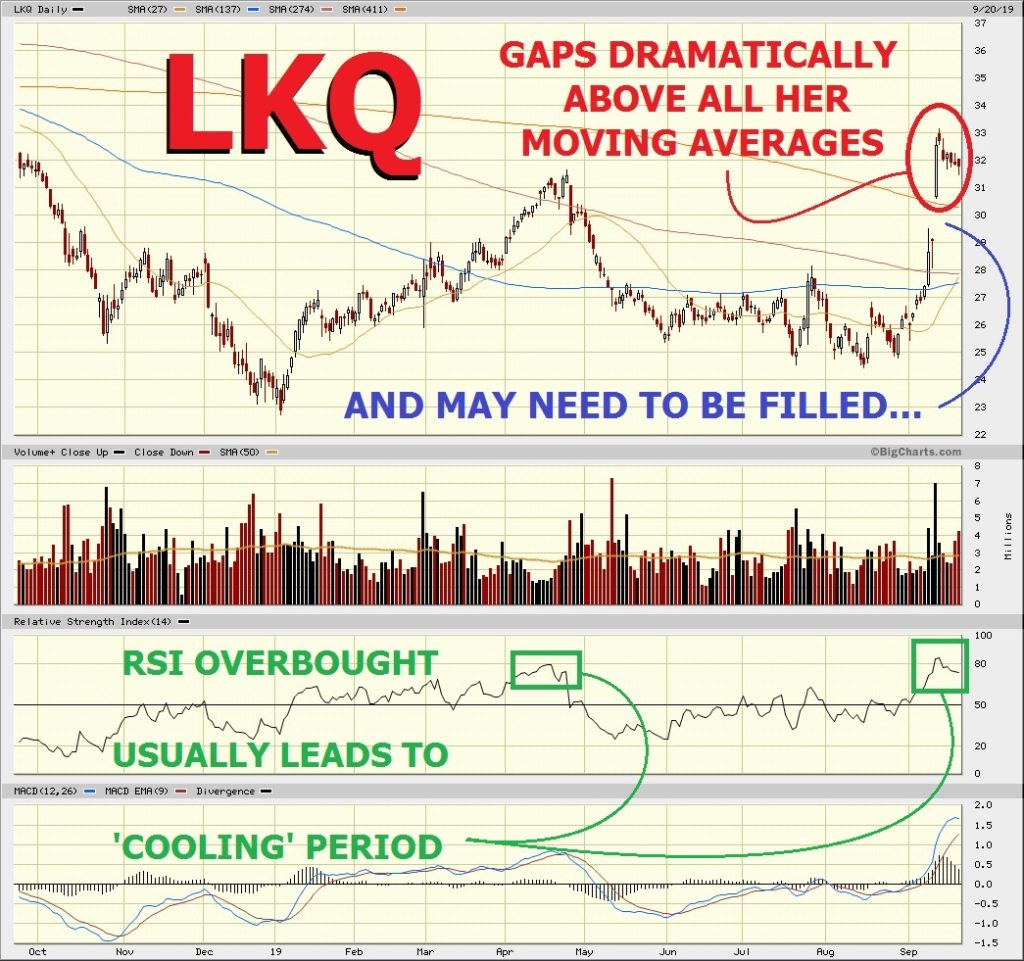 Note first the RSI overbought read (in green), a signal that sellers are likely to enter the fray after such a heady run-up.  Bulls will certainly be on guard.

Additionally, the gap between $29.50 and $30.50 (in blue) may have to be filled.  To repeat, LKQ leaped over that space on news of ValueAct Capital’s $500 million investment.

So where do we stand, Huey?  Tie it all together.

At the same time, we can’t see the rise continuing with anywhere near the same enthusiasm – more likely, we’ll see a consolidation before the next leg up begins.

2 responses to “LKQ Will Trade in a Range (LKQ,BMRN)”