It’s our considered opinion that the Middle East will be hotter this summer than it has been in a while.  And that’s not to take anything away from the ongoing Syrian and Yemeni conflicts that have seen enormous death tolls to date, or the ongoing Afghani and Iraqi wars that have drained American blood and treasure for the last two decades.

Just to say that this summer could see a ratcheting of the rhetoric and a ramping of the ordnance and munitions in the central Asian arena.

And not only there.

With negotiations ongoing with both China and North Korea over exports and nukes, it pays all sides to keep the flames of military preparedness stoked and visible.  That’s what makes for a healthy and vigorous negotiation, y’see. 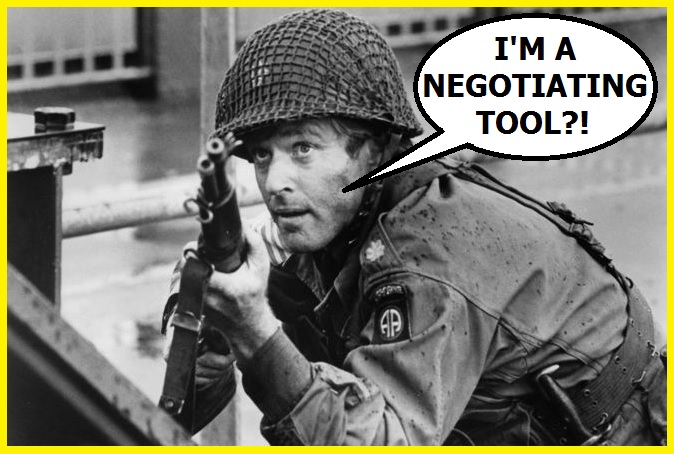 It’s a tool that everyone’s aware of and all employ, despite oft-chimed shibboleths to the contrary, that, for instance, ‘one must never negotiate under fire’, or that ‘only honor, good will and integrity’ bring a just conclusion to the deal.

Most realize that these are empty slogans offered for public consumption, and that even those who utter them ultimately belie them with their actions both overt and covert.

Pressure is the name of the game in diplomacy, after all, and he who brings the most pressure to bear without succumbing to the enemy’s riposte, wins.

And so we’re seeing a great effort on the part of the Trump administration to fashion the hardware of war and deliver it to the enemy’s front line in order to turn the proverbial screws and advance the cause of American economic hegemony.

The endgame currently is to – 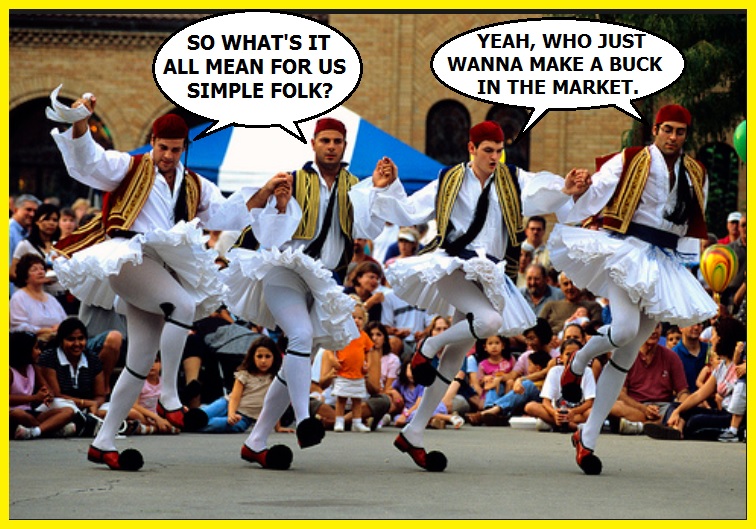 Simply put, you can count on the current tensions to underpin the Aerospace and Defense sector.

Let’s look at a chart.

This is the iShares U.S. Aerospace & Defense ETF (NYSE:ITA) for the last six months. 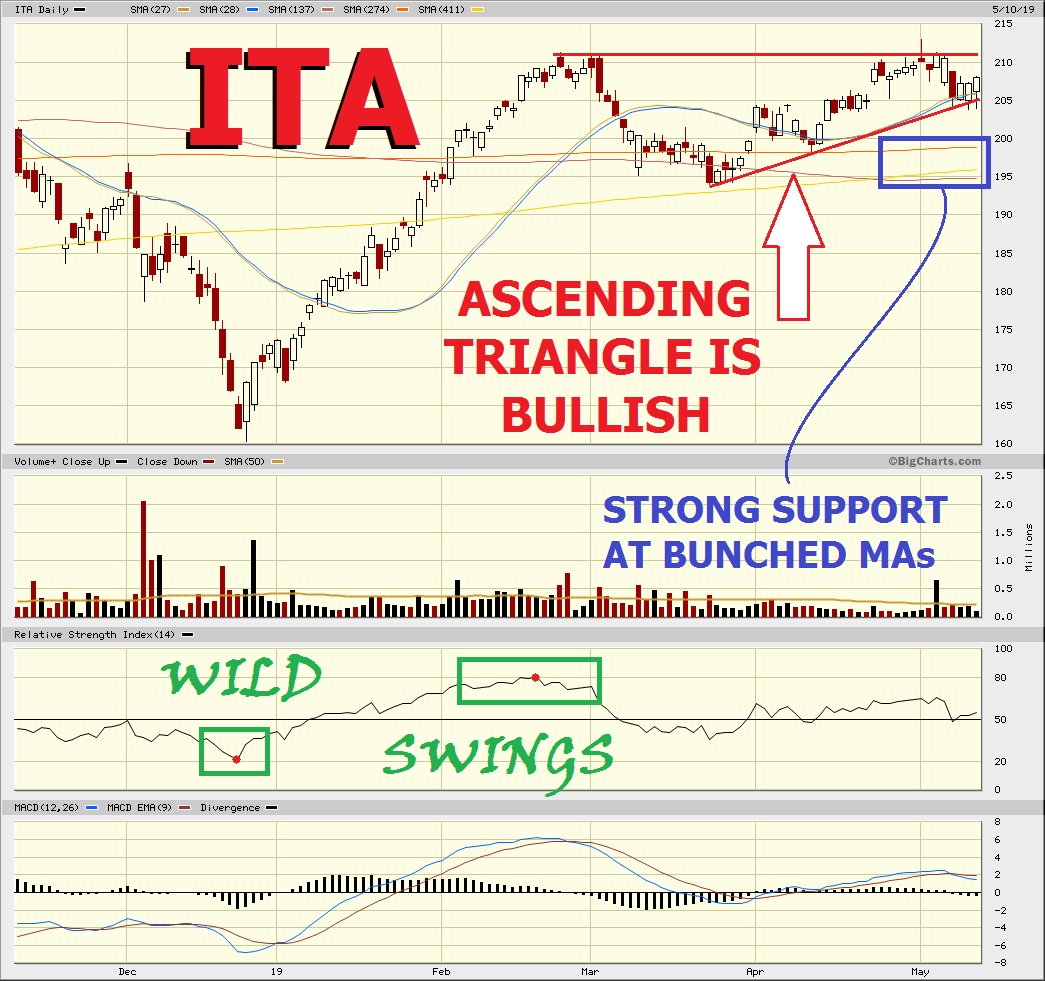 After swinging from oversold to overbought between December and February (in green, at bottom), shares of ITA have retrenched alongside the rest of the market, moving sideways, burning off their overbought condition and are now awaiting a catalyst to turn higher.

In so doing, they’ve also traced out a bullish ascending triangle formation (in red) and await only a burst above resistance at $210 to trigger wide scale technical buying.

We should add that the bunched moving averages in the $195 to $200 range also provide strong support for the stock (in blue).

All of which is to say that the military industrial complex has the wind at its back, and traders poised on the long side of ITA stand the best chance of profiting.

But as you well know…

We hate to pay for our trades.

So, we’re also looking at market sectors that are not presently exhibiting such a robust posture, and after running up of late, look vulnerable to a bout of selling – if not a stout, out-and-out rout.

Take a look at her chart for the last half year – 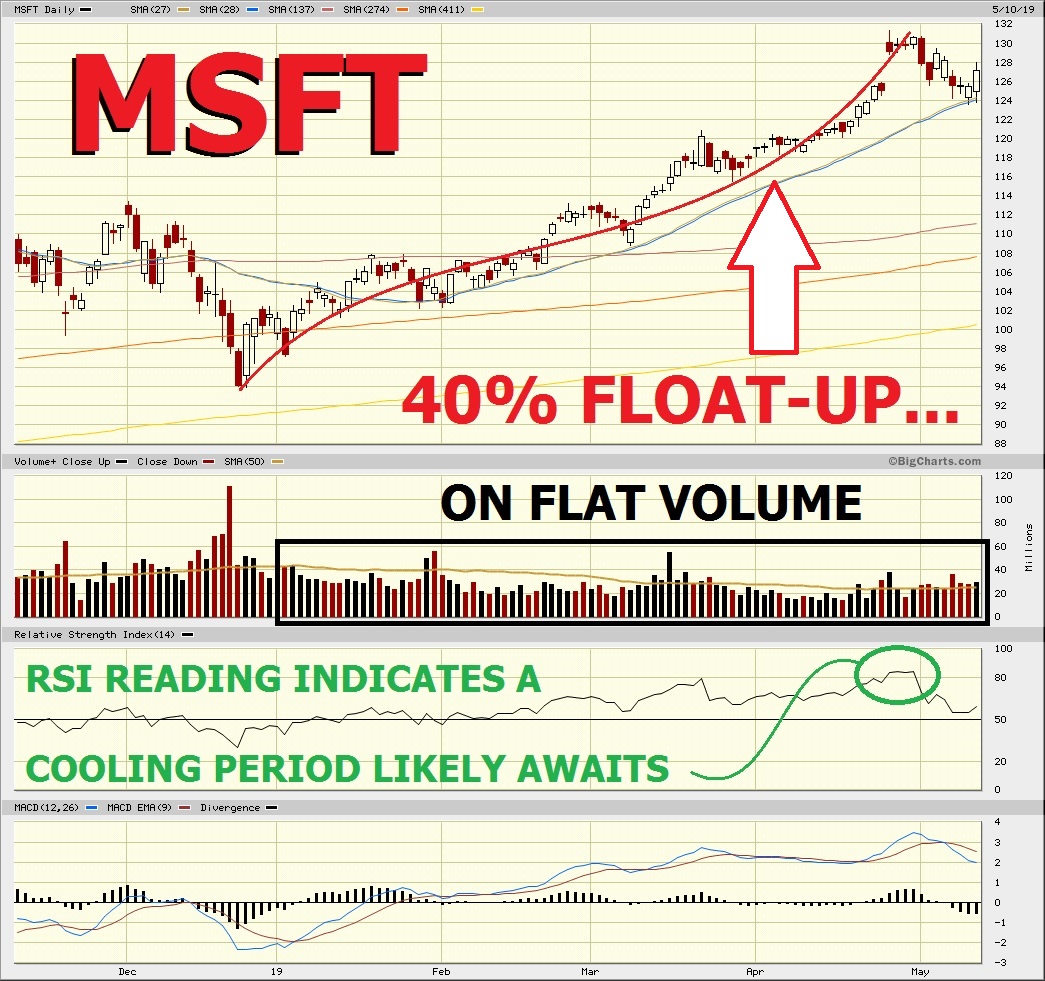 Two weeks back, MSFT went steroidal overbought (in green) after a 40%, four month algospasm that took the stock a bridge too far.

The upside for Microsoft at this point is limited.  It’s very likely she’ll decline towards $115, a simple Fibonacci retracement of roughly 10% from current levels.

And it’s for that reason we see in her the perfect foil for the war industry.

The trade we’re setting is therefore long/short the above two securities, and it goes like this –

We see this unwinding as we approach the 4th of July.