We apologize in advance for making reference to the sick and twisted ways of certain deviant individuals, but as we live in a time of increasing permissiveness and a blasé, Que Sera approach to what was once considered holy and integral to society,it’s now inescapable: one can no longer venture the public square but one’s gaze is immediately nabbed by some arresting figure whose ‘lifestyle’ choice has been selected purely on the basis of its shock potential. 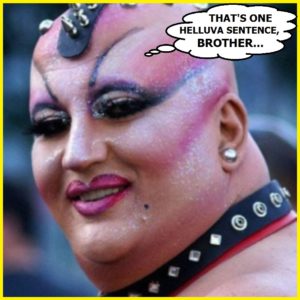 We mention it, because things went a step too far recently with this – a movement of people dedicated to self-love in a manner that would have shocked even the Grecian Narcissus.

The Times in Which We Live

We know this story, of course, and it won’t end well.  The story of Noah speaks directly to the excesses of man’s material hungers – and the cataclysm they’ll inevitably engender. 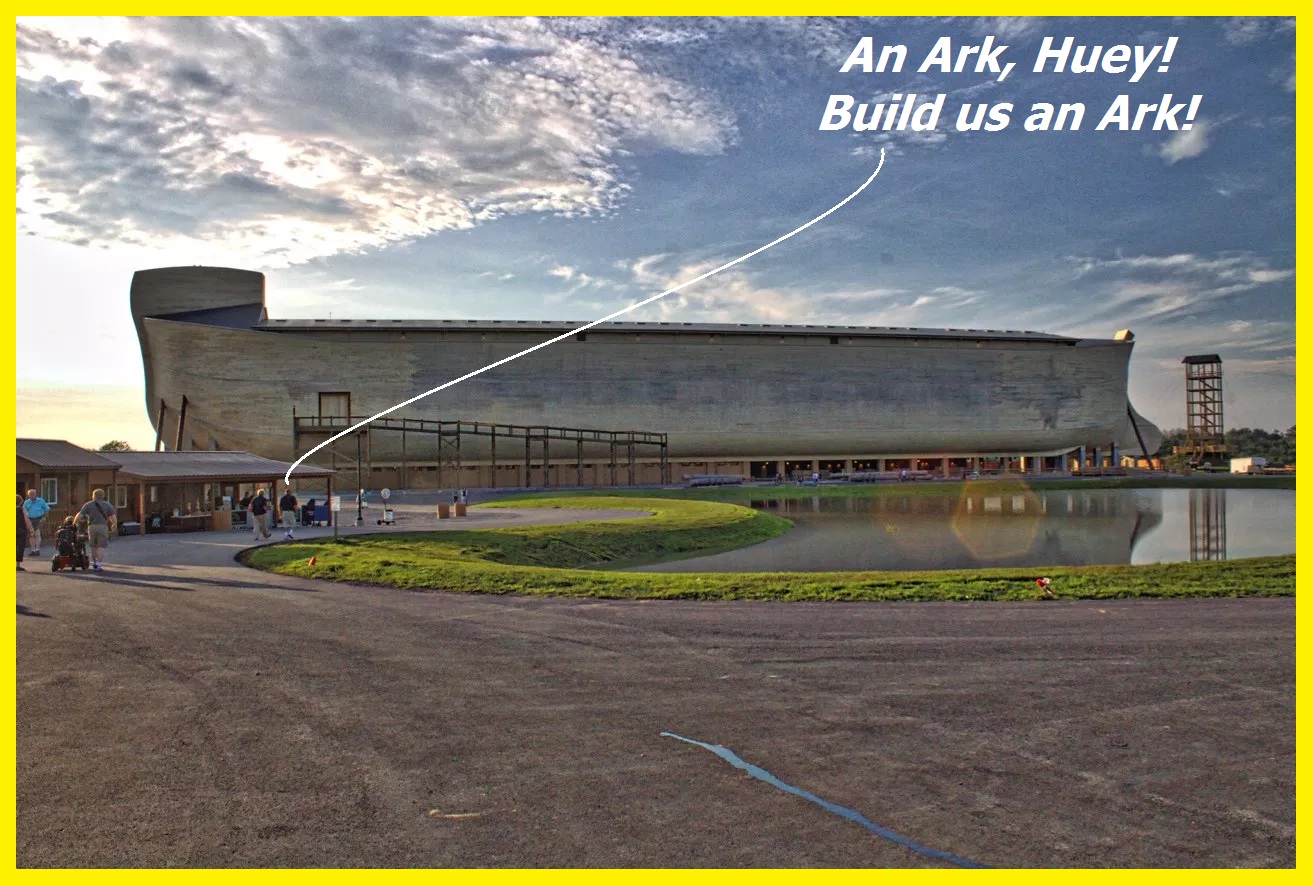 A “step too far” and “resulting cataclysm” is also the way we’d describe the action on mid-cap financial wonder Market Axess Holdings (NASDAQ:MKTX), a company with an $11 billion market cap that serves as a digital bond trading platform.

MKTX is an impressive venture.  It controls over 80% of the trade in corporate investment-grade and high yield bonds, and a recent agreement with Virtu Financial now offers institutional users on the platform a host of new trade tools and analytics.

Fundamentals?  Most recent earnings of $1.39 beat expectations by two cents, and management has grown that number by better than 20% a year for the last five years.

Maybe, but things have gotten a bit stretched of late.  Apparently, MKTX investors have begun fondling their elbows. 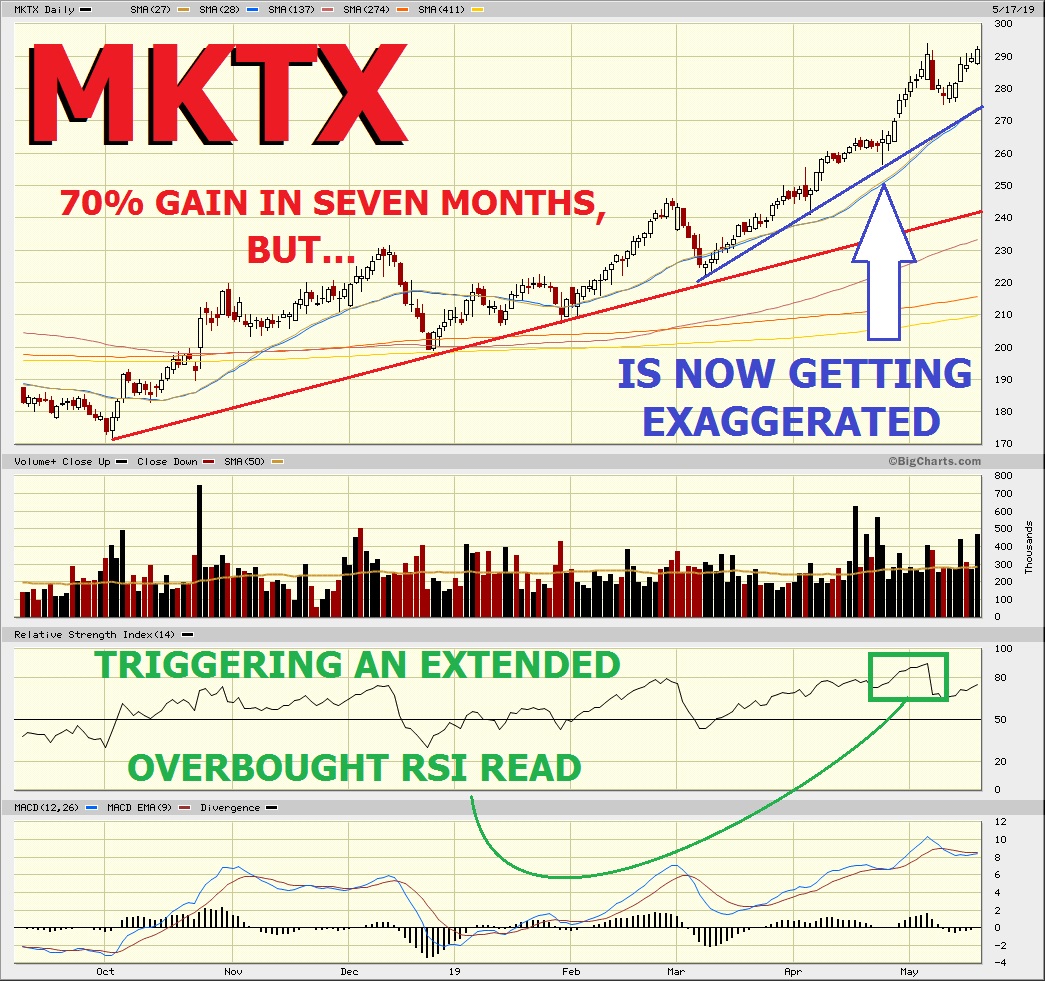 Even with the earnings beat and the Virtu deal, there’s little to support the kind of gains we’ve seen since the fall.

RSI spent better than two weeks recently in the ethereal overbought (in green) and has just pulled lower.

And coupled with a 30% rise over the last 60 days, our call on the stock is now a clean SELL.

Look, too, by the way, at MKTX’s performance against the broad financial sector, represented by the Financial Select Sector SPDR ETF (NYSE:XLE) – 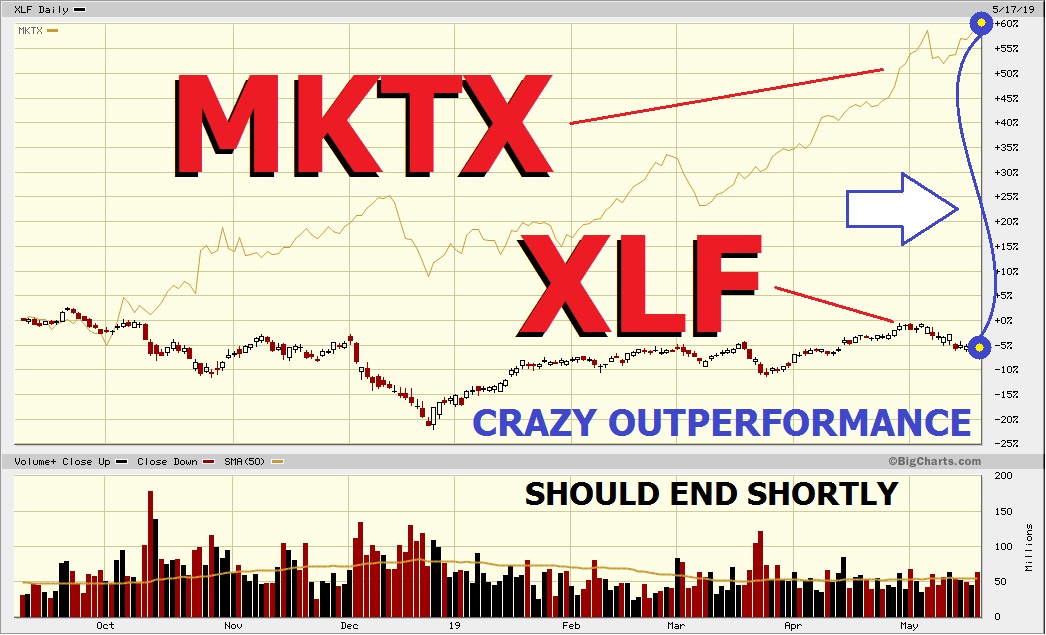 We believe Market Axess will succumb to Wall Street’s ‘rotation’ exercise in the intermediate term.

They’ll justify it with reference to a current multiple of 62x trailing profits and a Price/Book of 17.  Yes, she also pays a 2% dividend, but no one really cares about the numbers at this point.  Profits need be redeployed into cheaper issues.

And while it’s a fact that the corporate bond market has been afire of late, it’s losing momentum.  And that too should impact on MKTX’s appeal.

With all the above in mind, we offer you the following –

Pay attention to those expiries.

Next Post »
TRADE BULLETIN: Close Out Your DIA/QQQ Pairing (4/29) NOW!