We’ve got a great set-up for you today, using a communications pairing that pits Godzilla against Rodan in a 5G battle to the death. 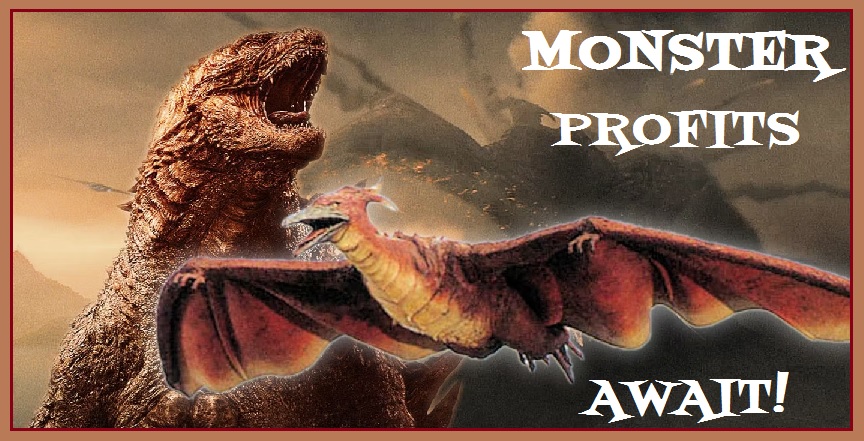 So let’s get right to it.

BUT COULD IT BE…?

The essence of the trade is the wild discrepancy in performance over the last four trading sessions between AT&T (NYSE:T) and Verizon (NYSE:VZ), the behemoths of the American telecom scene.

Admittedly, traders were onto something when just last week they jacked up their purchases of T and dumped VZ.  But, alas, as it goes in this world of manias, addictions and hyperactive Twitter-schlock, the action went too far.

A look at how the two stocks have performed against one another shows the wild, bipolar mania that took over telecom last Thursday/Friday— 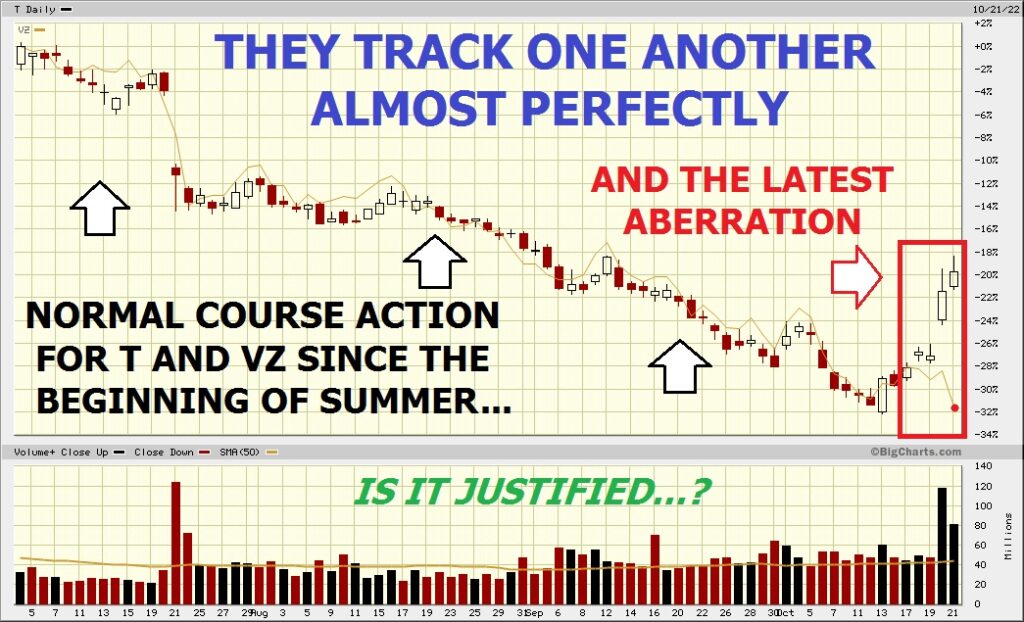 We don’t believe what happened is reality-based.

That is, the gap between the two stocks will very likely close, because the justification for the move was wanting, in our view.

In short, Verizon posted earnings, beating earnings and revenue estimates, but failed to gain a truck-load of customers in the all-important postpaid (monthly) category as fast as AT&T.

The market being what it is, Verizon’s punishment commenced, and the rewards were lavished ham-handedly on arch-nemesis AT&T. 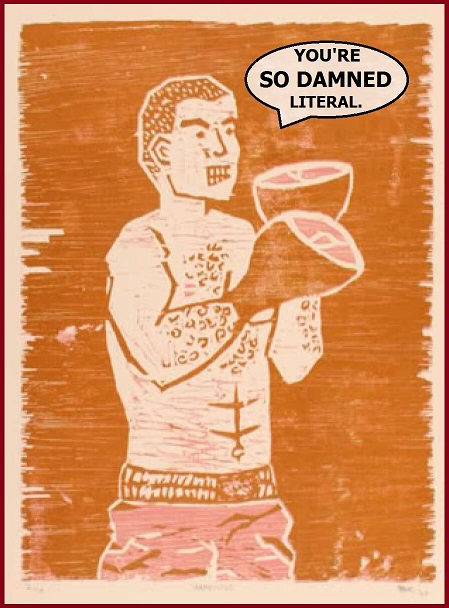 Subscriber momentum is important, to be sure, and AT&T is certainly excelling in that metric.  But whether Verizon’s more pricey plans are the real reason for the lag is questionable.  And that’s where most are laying the blame.

Moreover, it’s not clear that AT&T’s outperformance in this area will continue.

What is clear, however, is that, technically, both stocks flipped out—and that’s what makes today’s trade so timely.

Have a look now at six months’ of VZ chartitude – 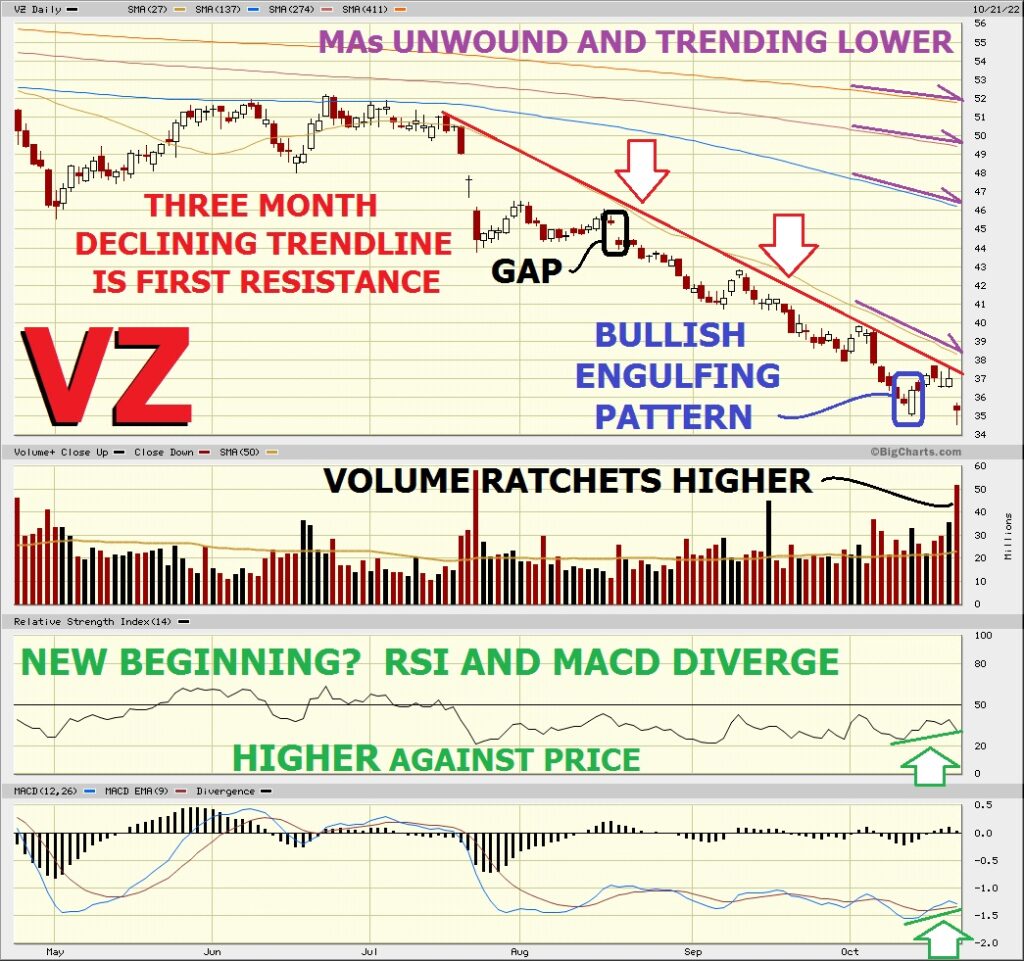 Now look at T’s action for the corresponding period – 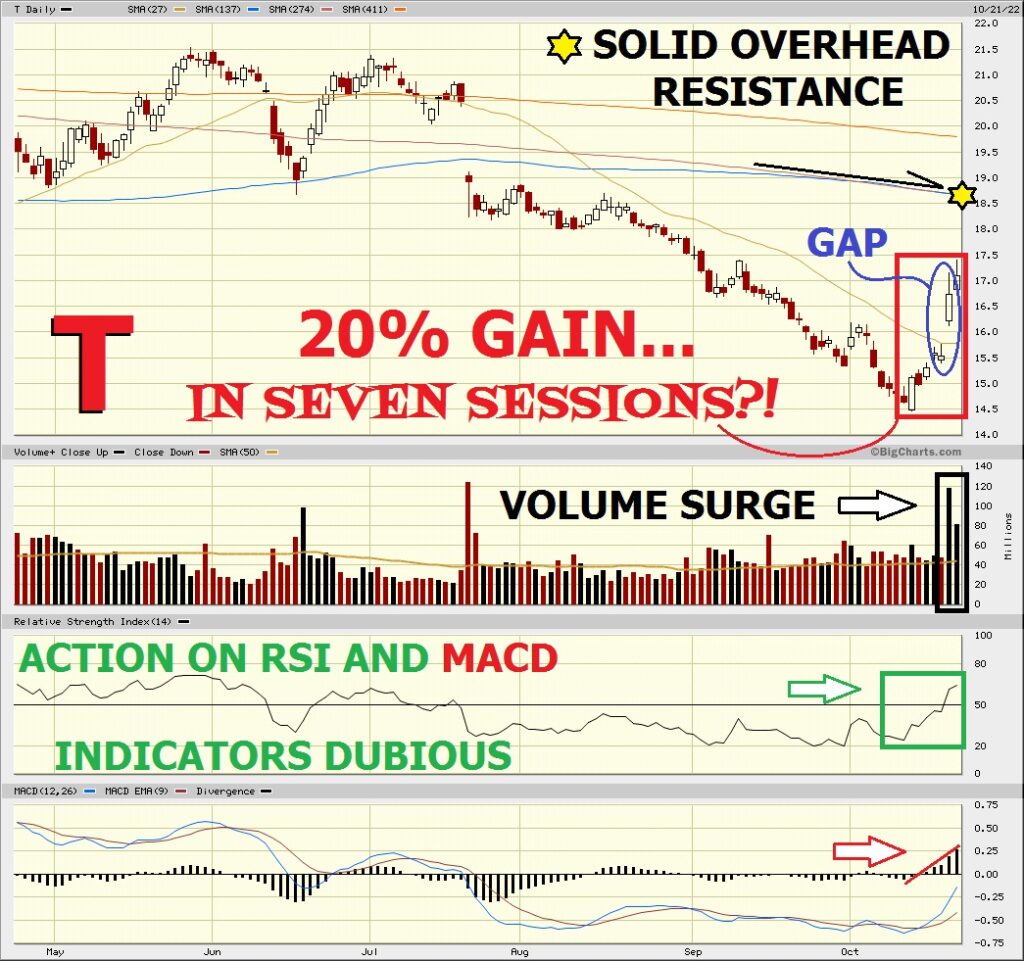 The trade that emerges from all the foregoing, however, is dynamic.

That is, we’re going to make a recommendation, and then urge you to modify it according to your capacity for risk.

We’ll spell out the risk/reward profile at the extremes, then you’ll decide to insert yourself anywhere in between.  By all means, be in touch if you have questions.

Here—you’ll see what we mean…

We’ve put the pedal to the metal on this one, betting with the full expectation that VZ is going to outperform T in the next 90 days.

Which is why we’re also framing the trade from a minimal risk perspective.

Instead of ten CALL spreads purchased, consider buying just one.

The ensuing calculus yields the following—a maximum gain of $4.36 on nothing laid out (2806%).

Theoretically, the trade works as follows—

The T side of the trade provides us with three items: working capital of $17.10; a chance to profit by $1.10 on the downside; and a limited loss of $0.90 should the shares head north.

Beyond that, our personal risk appetite guides the trade.

You can sign on for anywhere between one and ten VZ CALL spreads, upping the potential gain AND RISK with each spread purchased.

Again, max and min profit/loss parameters have been provided above.

What are we looking for, essentially?

Roughly speaking, $1.74 (or more) in collective VZ gains and T losses will put us strongly into the black, regardless how many spreads we choose to purchase.  And that’s a likelihood we see occurring in spades.

Finally, the trade will likely be closed—or partially closed—once we see the expected narrowing of the gap between the two stocks.  We needn’t wait for expiry, though we’re prepared to do so if the action unfolds to our advantage.

That said, the whole affair could wrap inside a week.

And with that, we bid you all G-d speed and lots of mazal.