The cell tower erection and maintenance business has been hard to beat of late.  Despite a growing grassroots opposition to 5G, the companies that build and maintain both new and existing networks are making a Guadalajara killing. 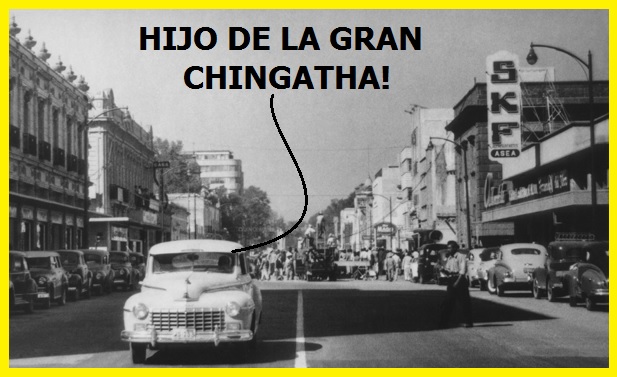 And among the leaders in the field is SBA Communications (NASDAQ:SBAC), a company whose stock price, apparently, has a heavenly mandate never to fall.

But first some fundamentals –

SBAC trades with an unsightly P/E of 245 (!), a dividend yield of 0.56% and a negative P/B.  The shares are better than 96% institutionally owned and insider transactions for the last six months have seen a 32% drop in holdings.

Not a great vote of confidence, there.

On top of that, of course, we have the charts.

We’re going to look now at the daily, weekly and monthly paste-ups, because we feel the stock is sitting at a crucial juncture, and there could be – that’s right – a Guadalajara killing to be made on the coming retrenchment. 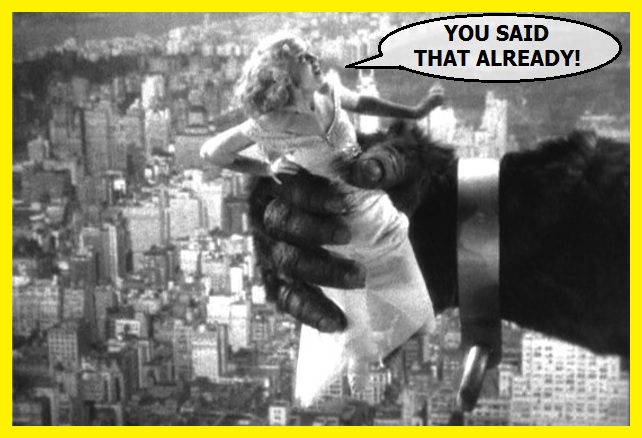 Let’s start with the daily –

After an RSI overbought read back in late March (in green), this sucker just kept on climbing, tacking on an additional full third of its price over the next five months.

Just like King Kong up the Empire State Building back in ‘33, the tower erection theme remains alive!

And with price action pushing almost 50% higher than her long term moving average (orange line), SBAC looks like it may be due for a bust. 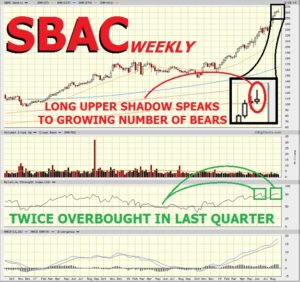 The weekly chart is now solidly inside 80+ overbought territory (in green) for the second time this calendar year, with the first occurrence coming back in June.

And this is where the danger goes high voltage.

Because when weekly RSI confirms a daily overbought indication, it’s simply best not to stick around.  As we mentioned above, the company’s insiders – those with the best knowledge of SBA’s workings – have sold a third of their stock in the last half year.

And if that wasn’t bad enough, look now at the monthly – 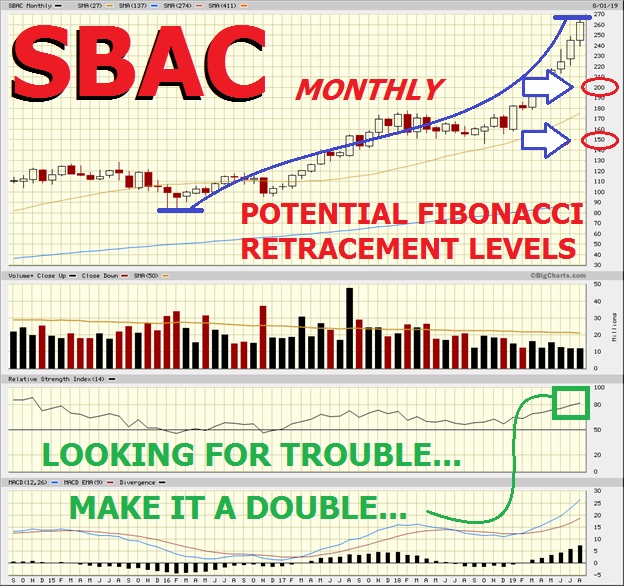 Here, we also have an overbought indication from the monthly RSI (in green)!

And that ain’t right.

When all three Relative Strength indications reach this level, there’s little more for a bull to hope for.

Our very strong feeling is that there’s zero juice left in SBAC and that she’s best left alone – or traded against a more solid citizen – one who’s less likely to take to the skids should a meaningful downturn arrive.

We’re going to give the trade as much time as possible, and look for a decline to the first, simple Fibonacci retracement line on the chart at approximately 200 (above, in red).

And we’re playing SBAC against the Qubes.

The gap will close.

« Previous Post
I’ve had it up to HERE with the Utilities! (NEE)