How else do you explain a three month, 88% rise in the stock of this salmonella inducing purveyor of dirty, dirty birdy?

Not only that, but over the last fourteen months the rise was an astonishing 186%!

OK, so it’s a growth play, you say.  But remember what happened in the fall of 2015, Mr. Growth Fiend, when Chipotle (NYSE:CMG) topped out at $750 and spent the next 30 months losing 67% of its value!  At the time, there were plenty of others like you, yelling “Growth! Growth!”

Let’s add a little fuel to the fire here by saying that the fundamentals on Chipotle appear a tad overdone.

Anyway, a look at the last year’s trade in Chipotle shows the shares have an affinity for wild swings, and that’s precisely what we plan to exploit at this time. 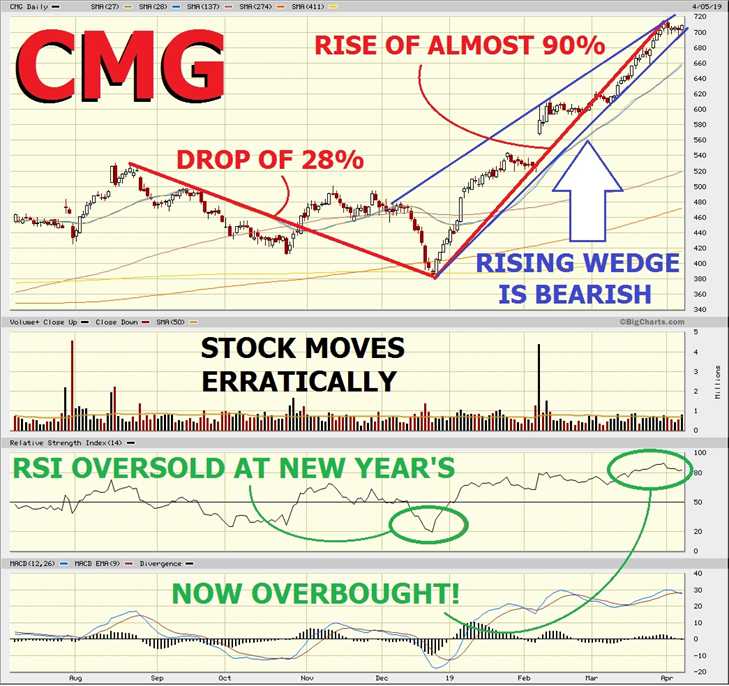 This is CMG since last summer.  The stock dove 28% through the market bottom in late December, then rocketed northward nearly 90% over the following three moons.

Moreover, it’s currently registered an extended overbought RSI signal (in green), that taken alone would be enough to engender an all-out SELL call.  But combined with the rising wedge the shares have traced out since December (in blue) – a pattern that’s only bearish – we see weakness ahead for the nation’s most popular chicken hawkers.

But while we’re at it, let’s grill this Rhode Island Red to a crispy char.

This is the last 40 months of burnt bird (since the 2015 all-time high), and it reveals the following – 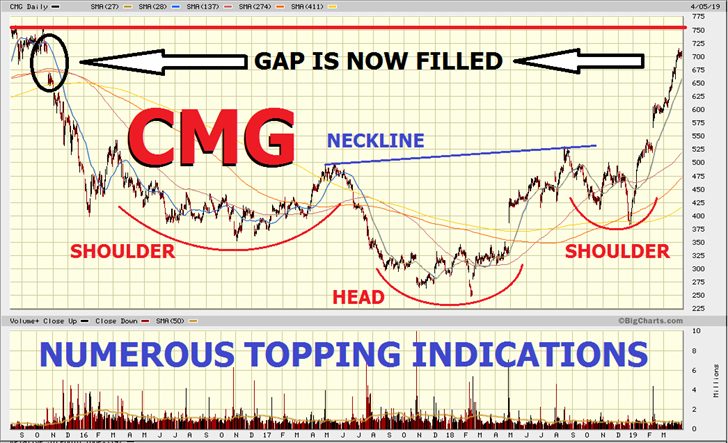 To sum, there’s little chance of any further rise at this point, not only because Chipotle is now in the process of taking the ether, but because the rest of the market is also due for a pause.  While earnings have been strong (and are due out the last week of April), we believe the bullish story centers around February’s buyback announcement, one that put extra wind in the company’s earnings’ sail.

CMG announced its intention to execute another $100 million in repurchases.  It also claims it will open another 150 restaurants this year.

In keeping with our expectation of a near-term broad market retrenchment of between five to ten percent – possibly in line with a China trade deal announcement – we’re going to recommend the same for Chipotle.

She’ll meander sideways or fall, but she shall not rise.

And with that in mind, we offer the following CALL spread – set slightly above the overhead supply line.

Next Post »
“Hey, I GATA Great Way to Make Money!”