The Chart That Gave Jordy an Aneurysm (XLE,XLP,DIA,ERIE)

Lots to get done today, friends, so hang on tight.

First up, we have a punch-up profit on our XLE/XLP, long/short trade that we launched exactly a week ago. 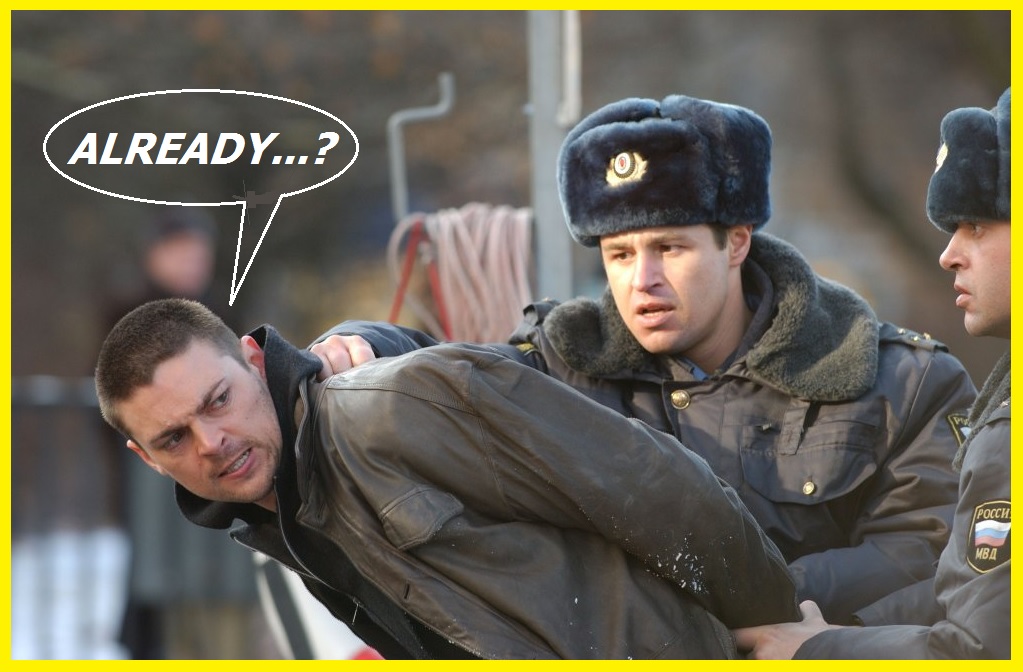 The letter was called Vengeance! Purge the Land! Burn the Evil From Your Midst!, and there you’ll recall that we recommended you buy the Energy Select Sector SPDR ETF (NYSE:XLE), then trading at $61.22, and sell the Consumer Staples Select Sector SPDR ETF (NYSE:XLP), then going for $58.95, in equal lots, for a total debit of $227 per lot-pair traded.

Suffice to say, that if you went in big, you’re a very happy camper today. 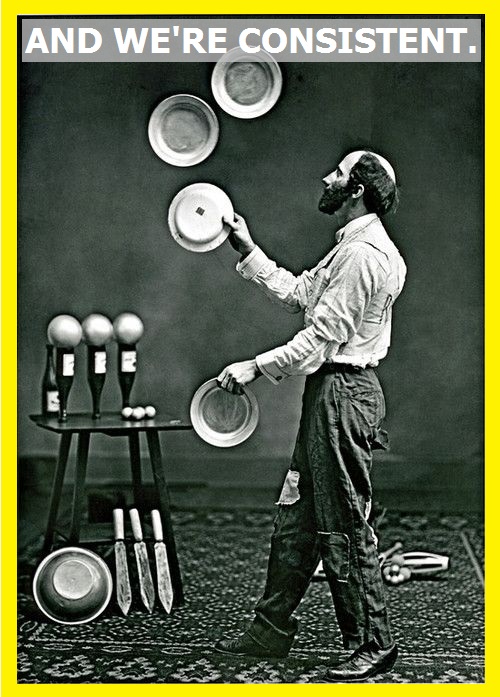 Do You Realize What That Means…?

You better fruggin’ well listen up!

On to this week’s work.

We’ll get to that in just a second, Mr. Question everything, but let’s first take a look at those above-mentioned sentiment charts to get a feel for just how out-of-whack the investing world is with the current stock reality.  It’s truly remarkable.

We’ll start with the AAII readings to get a picture of Main Street. 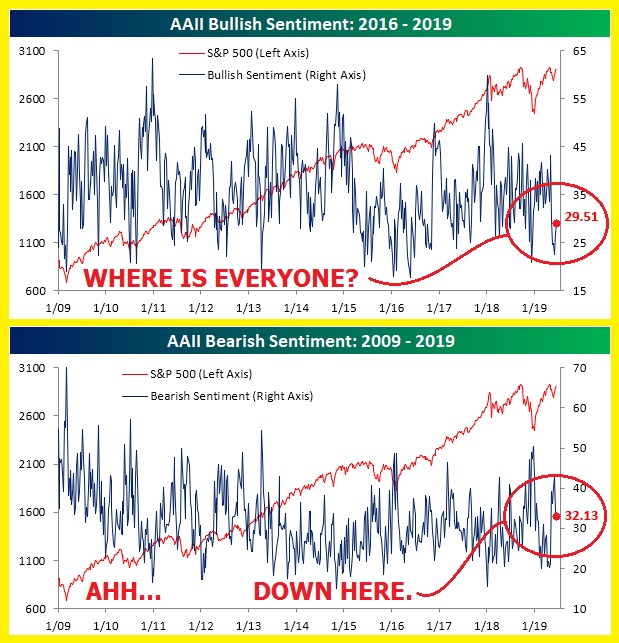 To put this into historical perspective, bullish investor readings are never this low when the indexes are at their highs (only 8% of past AAII bullish data have been this low at similar equity levels).

That means Ma and Pa are scaredy-pants worried for… ?

Now have a look at the pros – 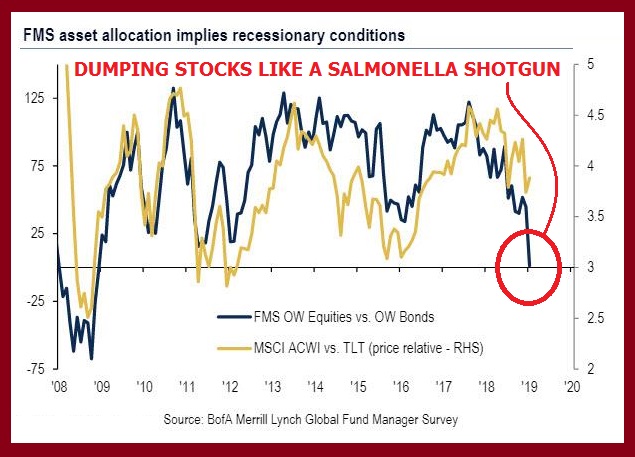 You’re looking at equity allocations among the world’s largest fund managers, and here, too, we see once-in-a-decade numbers emerging.

The figures recorded on the chart represent the lowest allocation to equities since the bull market began in March, 2009 and the second largest single-month drop ever. 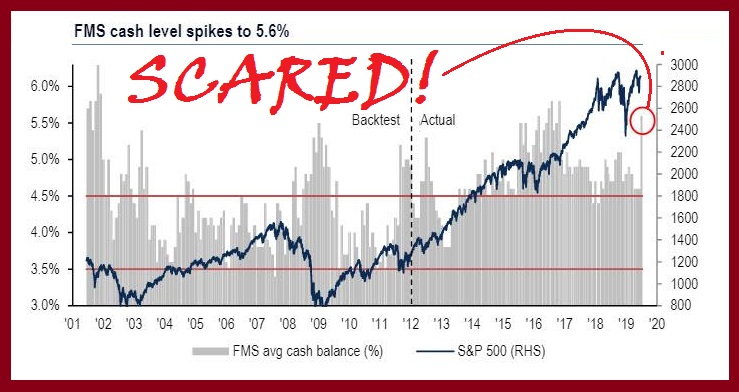 Cash holdings among these same professionals have skyrocketed – and fast.  The last three months saw the biggest move into cash of any quarter since 2011.

Suffice to say, there’s worry in the air.

All of which reaffirms for us that we are not at a bull market top here, despite the tremendous concern over trade wars and real wars and blockades and boycotts and sanctions and border walls and whatever the hell else you want to throw into the mix.  It’s all just serving to build a great wall of worry for stocks to climb.

So how do we trade it?

That said, there are sectors that are going to experience pressure.

Insurers typically do well in a rising rate environment, reinvesting premiums for ever higher returns as the Fed ratchets rates higher.

But now that the Fed has apparently done an about-face, and we could be entering a cutting cycle, the shine has come off that sub-sector, and momentum for insurance shares is now dwindling.

One company that we’ve targeted has had an enormous run in the last year.  Erie Indemnity (NASDAQ:ERIE) is a seller of auto, home, life and business insurance.  The company has a market cap of $11.75 billion, sports a dividend yield of 1.42% and sells at a multiple of 49x last year’s earnings.  Price to Book is 13x.

Not a great fundamental data set.

And the charts are worse. 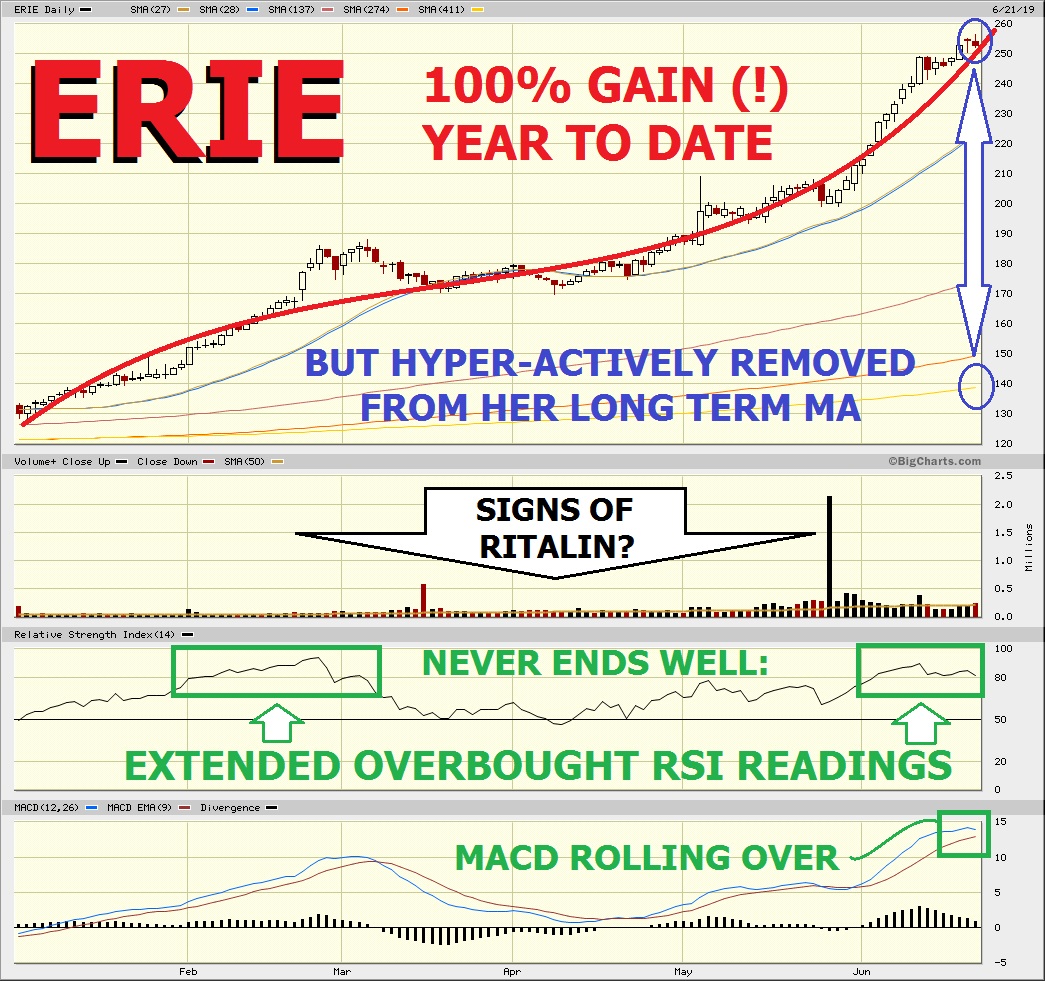 After doubling in price since New Year’s (in red), and twice entering extended overbought territory (in green), ERIE shares appear now to be topping.

And while this may appear to be a shoo-in, robot-slave kingpin of a short, that’s not the way we’re approaching it.

We prefer to pair trade ERIE against the broad market, as represented by the SPDR Dow Jones Industrial Average ETF (NYSE:DIA).

A Jew and His Money recommends you consider buying shares of the SPDR Dow Jones Industrial Average ETF (NYSE:DIA), now trading at $267.64, and selling those of Erie Indemnity (NASDAQ:ERIE), currently selling for $252.71, in equal numbers.  Total debit per board lot-pair is $1493.

Next Post »
TRADE BULLETIN: Close Out Your ABBV/IBB Trade (5/5) NOW!