When the G-d of Israel Strikes the Construction Industry (MTZ)

You don’t want to be too close…

That said, we’re looking at an infrastructure trade today, and targeting a company that contracts primarily with utilities.

The outfit is Florida based MasTec Inc. (NYSE:MTZ), installers of cable, piping and power lines above and below ground across the United States.

The company announced earnings just two weeks ago, beating street estimates and pushing the stock higher by better than five percent in the ensuing session.

But two weeks later, there’s been no improvement in price, even with management’s strong guidance. 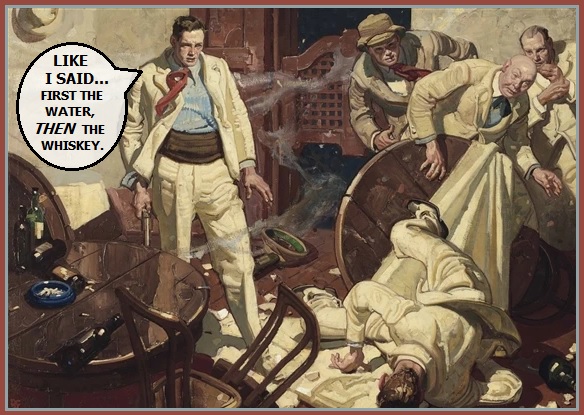 Which goes to show… sometimes the bartender gets it wrong.

We’ve a strong belief that MTZ has now pickled, and that both fundamentally and (especially) technically she’s got little to commend her.

MasTec is not a growth company, friends, and it’s not irrational to question whether she’s about to capsize and sink to the bottom of the Cay Sal Bank. 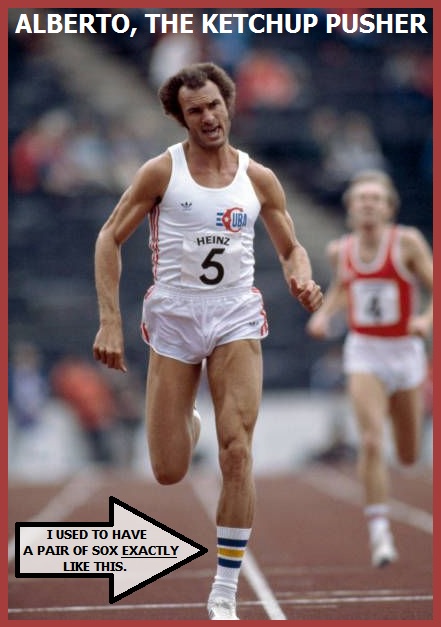 Anyway, from the shores of Cuba we now turn to the charts to get a finer read on MTZ’s health status.

And as you’ll see, both the daily and weekly charts are pointing to a coming decline.

Here’s the daily for the last half year.  We urge you to pay special attention to RSI readings both here and on the weekly paste-up. 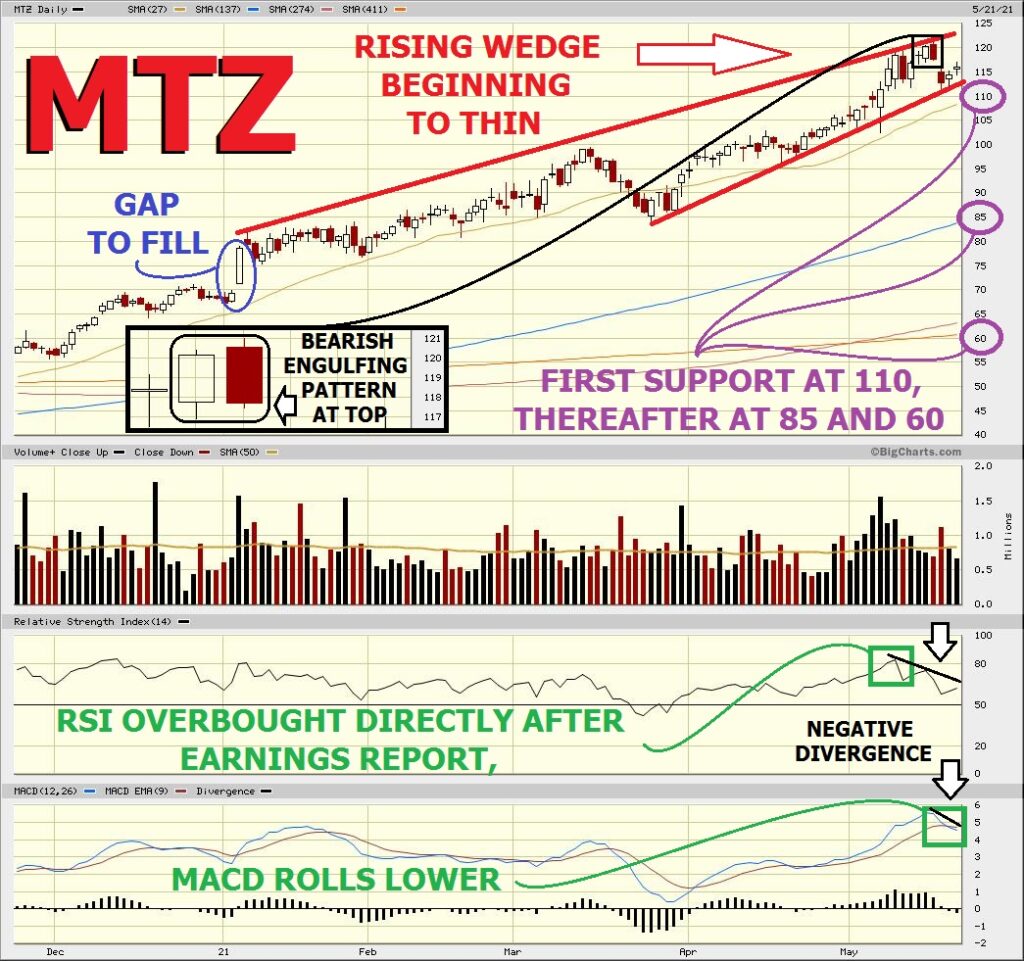 Not a great picture, all told. 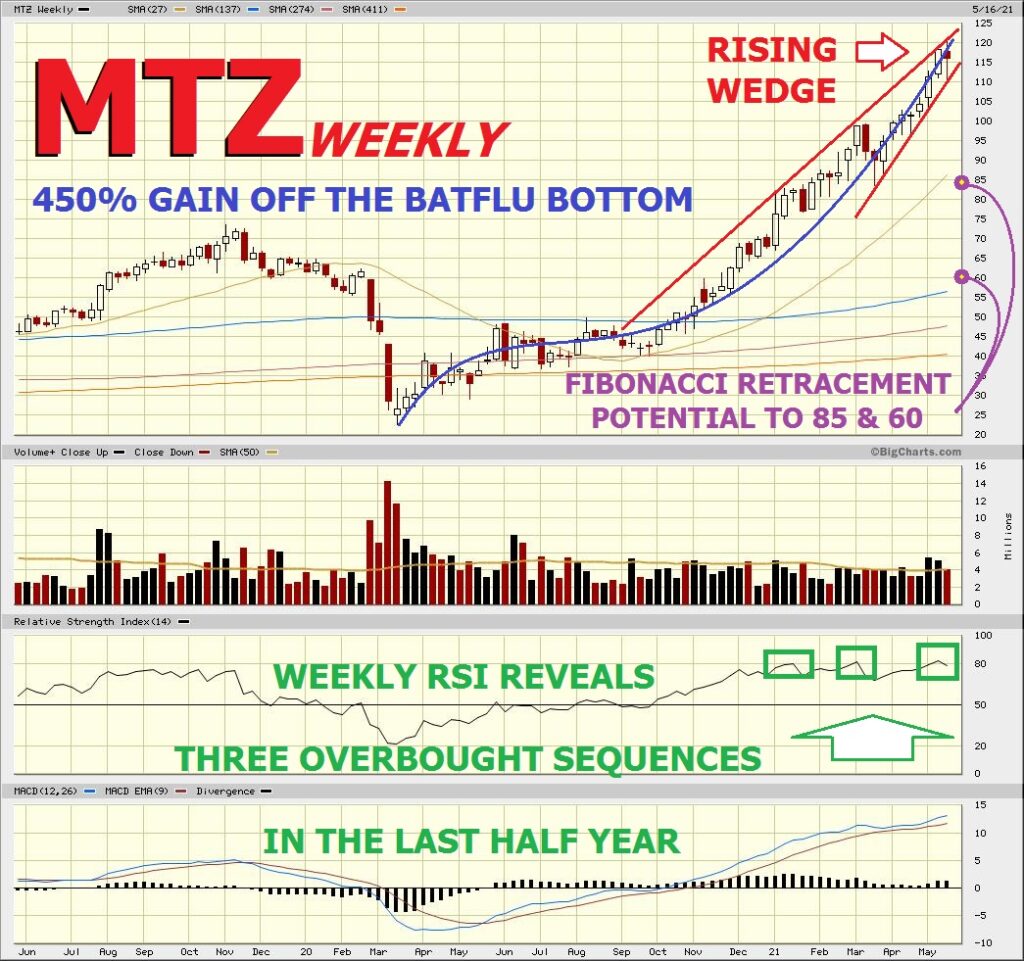 Here, we also have problems.

The die is cast for MTZ, in our humble opinion.

Rationale: with a decline expected in short order, we like the trade for several reasons.

First, breakeven arrives at $115.90, and with the shares currently trading at $116.02, we’ve got literally pennies to drop before we hit that mark.

A decline to the 85/90 range is our target, though we’d be happy to close on any appreciable widening between PUT and CALL values.

Maximum loss (with proper STOPs in place) is limited to our initial debit.  That’s a worst case scenario – in which MTZ takes off higher and closes above 125 at expiration.  We see that as a remote possibility at present.  It would require the stock to make new highs in a very unfavorable environment, and hold her gains after an already exaggerated 450% climb off the Batflu bottom.

In that manner, we keep the trade square.

May we see the coming of the righteous redeemer b’karov byameinu, and may our enemies perish al pi hanevi’im.

« Previous Post
MAY EXPIRATION – Running It Down and Rolling It Out (CAT, TPR, ESI, BLDR, FCX, CROX, WMS)

Next Post »
The Jeanie’s Out Of The Bottle! (LEVI)