You Say You Want a Revolution… (RVLV)

Today’s trade rides the back of the most overbought market we’ve seen in the last fourteen years.

Several of our own proprietary metrics are now off the charts – specifically, one ratio measure of what we term ‘cheap stocks’ vs. ‘top-outs’.  Nary have we seen a wider spread between the two.

And it’s with that in my mind that we’ve got the saddle firmly strapped to the Revolve Group (NASDAQ:RVLV), an outfit that retails clothing online (where else?) for those seeking the threads of ‘global fashion influencers’. 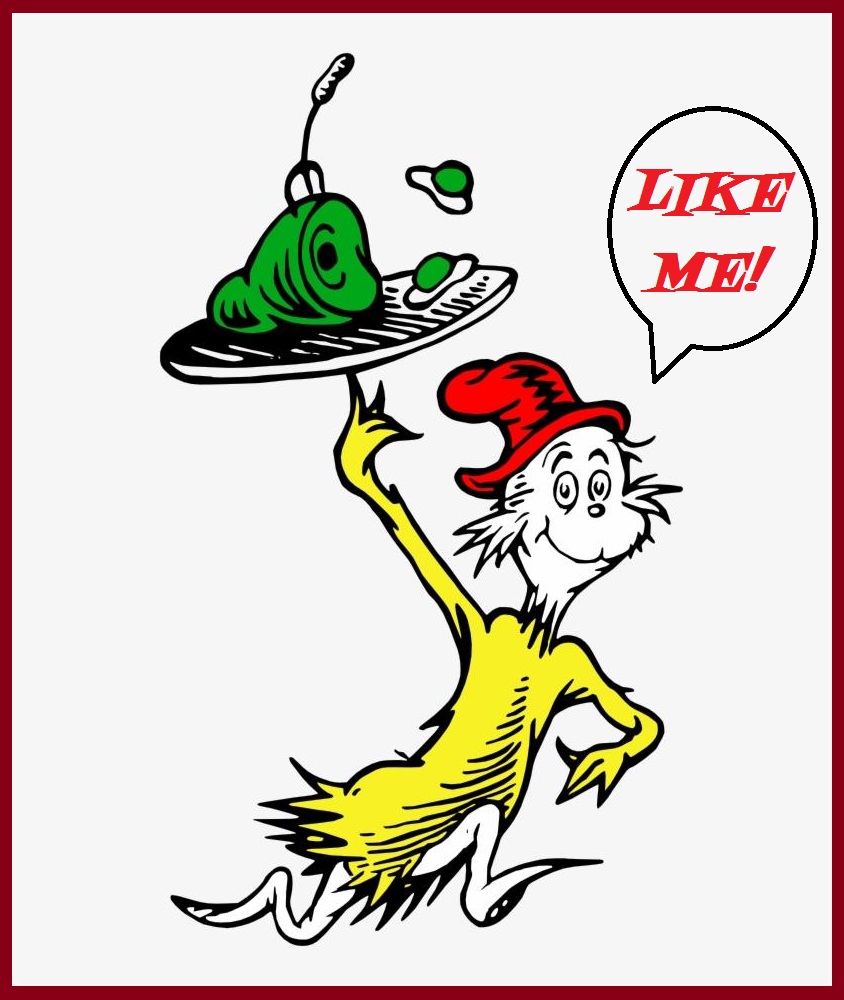 Doesn’t matter that the numbers don’t really add up, of course, when you cross the world of runway fashion design with Batflu ecommerce.  It’s a conclusion foregone that the masses will buy, right?

Up, up and away, and all that, right?

Until the revolution comes, that is.

Now, we don’t purport to any divine knowledge, per se, but we are Jews, so that should count for something, no?  The sons of prophets we are, after all…

And so we offer the following.

The Government of the United States of America will shortly pass a bill that will spin trillions of dollars in the direction of the stock market.

And Wall Street, being the clever lads and lasses that they are, will sell into all that new buying, sending the market gyrating into a brief but significant tizzy, only to move in, cat-like, to scoop up the goods at far cheaper prices after the fall.

Not sure of the time frame here, but if last year’s top-out/sell-off is any guide, we could be looking toward a late March bottom. 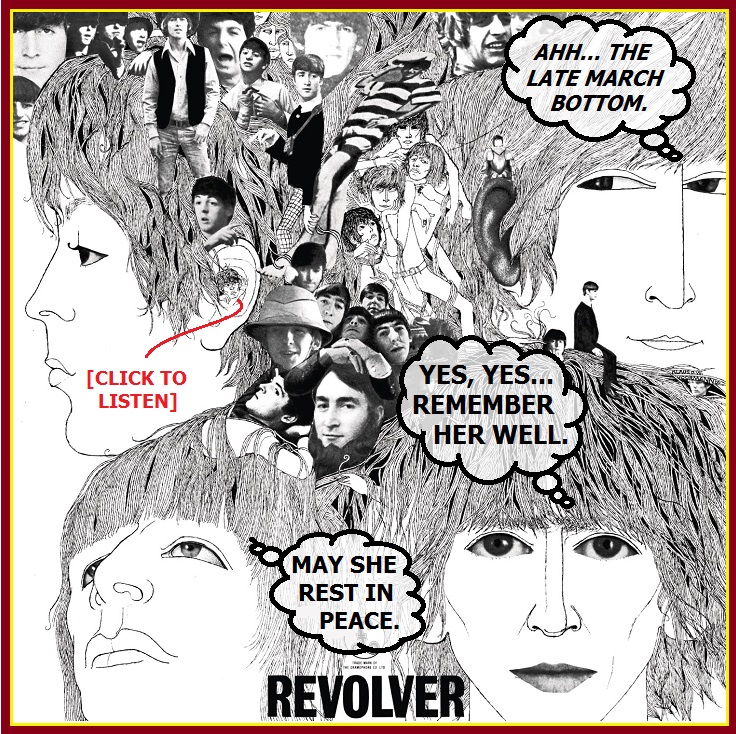 Here’s the company’s chart for the last six months – 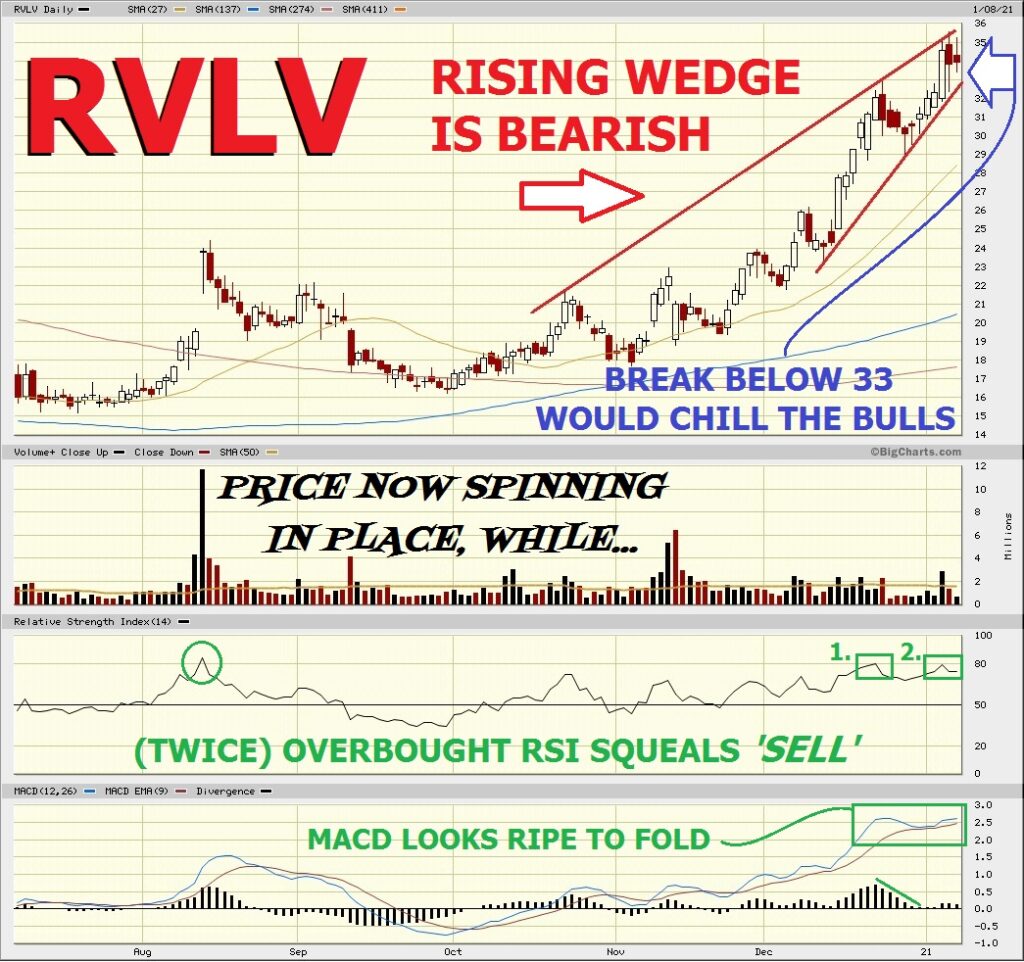 One more point here – while the major market averages ascended to new highs in the last two trading sessions, RVLV spun in place.  We’ll see what that portends in the days ahead.

Now have a look at the weekly chart since the IPO in summer, 2019 – 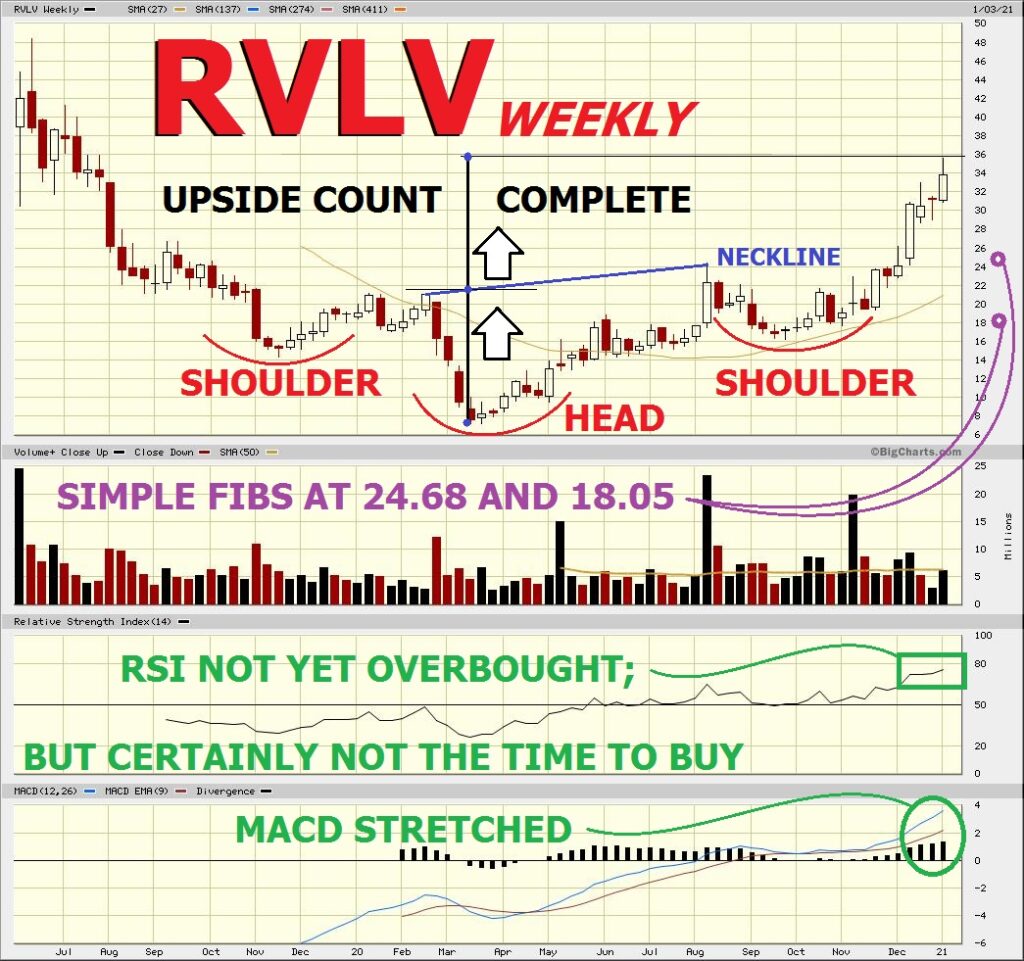 And the trade twists out from there.

Rationale: a decline in RVLV stock is best played with a long PUT.

Paying for the PUT, however, is not something we’re enchanted with.

Hence the sale of the CALL spread, which offers us a means of reducing costs significantly – and quantifying our risk.

Maximum loss is $5.40 (difference between CALL spread strikes plus initial debit) should RVLV close above 35 at expiry.

Important Note: There could be a fly in the ointment for all us RVLV nay-sayers, and that’s the current short float of the stock – which stands at a whopping 25.11%, and could ignite a buying surge should something unexpected occur.

And it’s for that reason we’re labeling the trade ‘speculative’.