The trade war appears to be gathering momentum, as both sides dig in and accuse the other of being mean.  But the truth, as we’ve stated many times, is that muscle-flexing and sabre rattling are ever the tactics of choice in these showdowns. 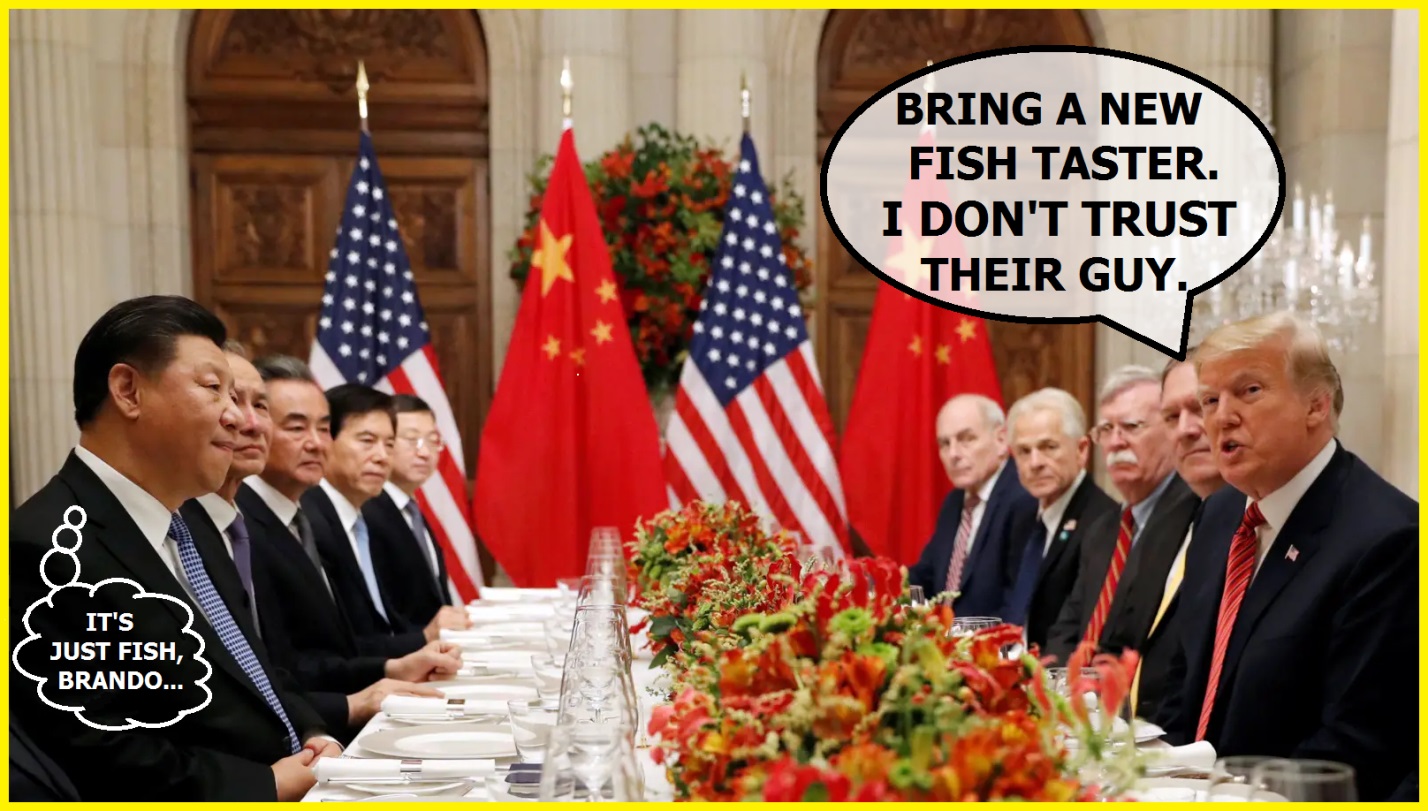 It’s All a Show, Friends

What’s actually gone down at the negotiating table is unknown.  Certain central details have obviously been hammered out; it’s just the remaining, loose ends that need to be tidied up.  And that typically signals both sides to begin with the blowhard bellicosity we’ve been blasted with over the past few weeks.

In the meantime, however, it’s not without its consequences.  U.S. – China trade volumes are not an insignificant percentage of the world’s total, and rising tensions have certainly contributed to a curtailment of global shipping and trade numbers.

Below is a chart of quarter over quarter, and quarter over year-ago-quarter numbers for overall global trade.  Take a look – 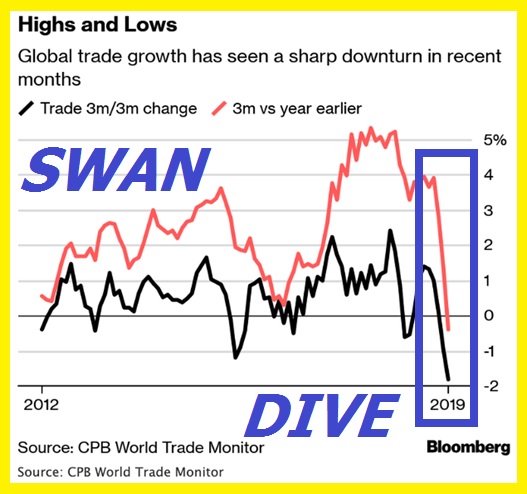 As you can see, the declines since last fall have been precipitous, and can be attributed directly to the White House’s ‘no more suckers’ tariff and trade policy – and China’s inevitable response.

Yes, it’s a bargaining tool, and yes, it’s a dangerous one.   But the ‘Any price you can raise, I can raise higher’ anthem is one that both China and America have to play at this stage in order to charm their respective audiences.

With the following limitations…

China has an economic and markets problem that the current trade impasse is exacerbating on a daily basis.  Time is no issue for the country’s ruling clique, of course, as commies rule via repression, coercion, threats and murder.  And while in Trumpville we have less to worry about from our economy and markets than the Chinese, we do have an election coming up in just over a year that we presume the President gives a hump about.

In other words, time is of the essence for the ogler-in-chief.

So the jury’s out regarding whether a fatal crack in the Chinese economy will occur before or after the President feels too weighty a reelection Biden burden to schlepp into 2020.

Just to offer a little perspective, though, the following fifteen year chart of export figures from BMO indicates just how far we’ve fallen – and offers a hint as to how close we may be to an agreement. 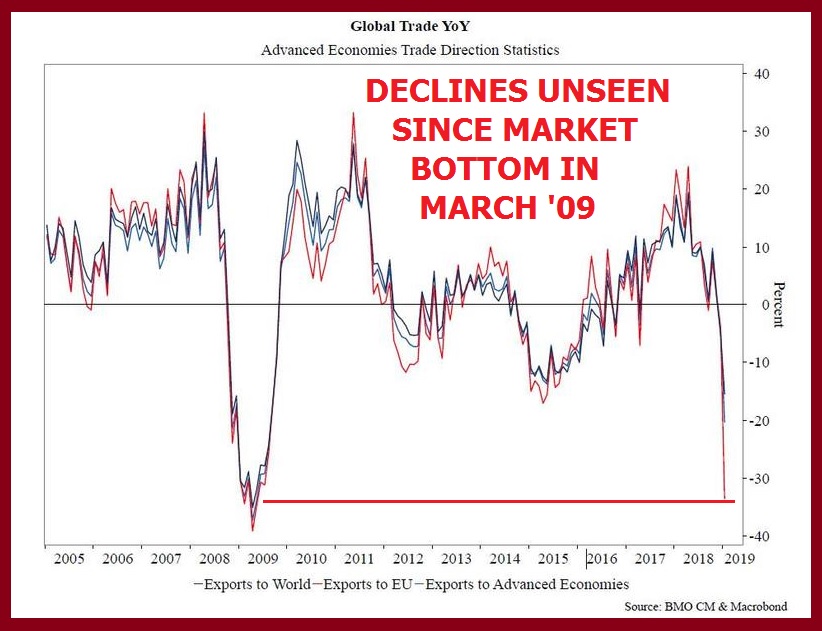 As steep as the decline in 2008/2009, though not yet as enduring, the last twelve months’ trade paroxysm is in itself a wonder.  And we would add that it has triggered absolutely no reaction whatsoever from equity investors!

We remain today an inch from all-time highs, blathering on about impeachment and Cannes and AI risks while nearly every advanced economy on the planet is revising GDP expectations lower. 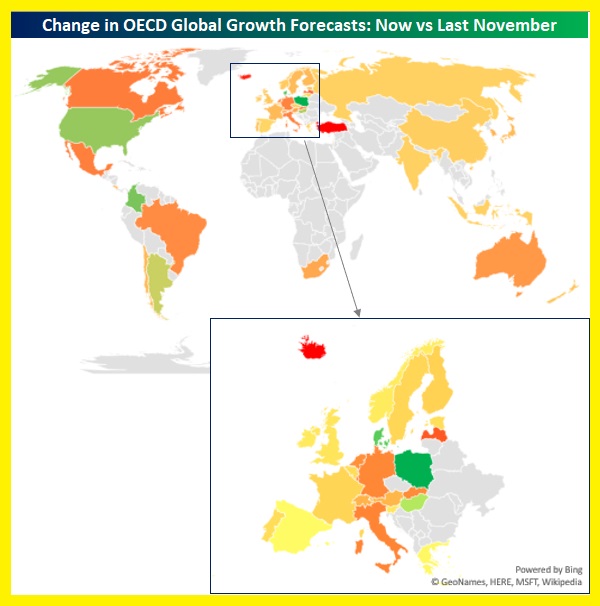 Countries of varying green hues are revising upward.  Those of the red/orange/yellow class are contracting according to the depth of their shade – lighter is slighter, darker is starker.

The standout fact here is that the U.S. is one of a handful of OECD nations whose GDP growth numbers are being recalculated higher.

All of which points to the fact that the U.S. still holds the upper hand in the current negotiation.  The pain is obviously sharper on the Chinese side.

And the test is now one of tolerance.

Those who seek a measure of each side’s pain threshold should simply keep an eye on each nation’s salient stock index.

Their respective performances will speak directly to the timing of a deal.

And to who can claim alpha male status.