Earnings season is just beginning, and according to most analysts, it won’t be so fun.  The last quarter’s performance from the S&P 500 was the best of any going back to the spring of 2009 – the exact moment the bull market began.  So hoping for a repeat of those numbers wouldn’t be wise.

But will we get a pullback?  Or just a sidewise meander?

We examine a number of metrics to get our bearings on these questions, and we’d like to share one of them with you today.  It’s our own, proprietary ‘volatility compression’ indicator.

We talk about it regularly, but many are still not familiar with it.

For those in need of a quick primer, belt-up.  Here it is.

In brief, volatility compression is a VIX-based indicator that assists us in determining intermediate market tops.

It’s never perfect, but it’s always useful.  And when it’s coupled with our dependable array of sentiment and technical indicators, it provides an excellent timing model for both long- and short-side entry points.

But How does it work?

First up, some basics.

The VIX is a measure of implied volatility on 30 day SPX options.

It’s our belief, however, that the actual, raw VIX number is of less import than the derivative value we began computing nearly two decades ago that we call ‘volatility compression’.

We were pioneers in its development and use and hold staunchly to the notion that ‘high compression’ days on the VIX are more apt to lead to meaningful selloffs on the broad market than straightforward low VIX values.

How is it computed?

In a word, volatility compression is a measure of minimal daily movement on the VIX chart.

Below is a graphic depiction of the concept using Japanese candles –

The actual volatility compression reading is determined by subtracting the day’s high from the day’s low and adding it to the difference between the day’s opening and closing VIX reads.

A very compressed day would therefore offer a sum in the area of 0.3 to 0.5, though we’ve seen selloffs occur after readings in the 0.6 range, as well.

That’s not to say that a decline MUST be precipitated by a high volatility compression day.  It simply means that an extreme compression reading offers greater chance that a selloff is around the corner.

What’s compression got to do with it?

Many have asked why we believe the compression figure speaks so directly and with such abundant correlation to an imminent change in market direction.

And the truth is we haven’t investigated it so thoroughly, nor did we feel the need, as the numbers themselves provide proof enough that the indicator works.

But if we had to hazard a guess, we’d aver that extreme compression days are analogous to that ‘Wile E. Coyote moment’ that comes just before gravity seizes hold and the inevitable crash to earth ensues. 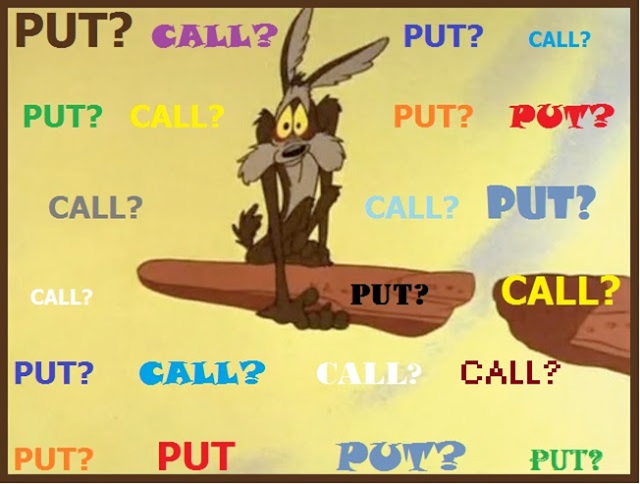 It’s as if market players stopped, looked left and right, bought their options, but all WITH AN EYE TURNED BACK OVER THEIR SHOULDER, WONDERING IF THEY WERE DOING THE RIGHT THING.

In such a scenario, PUTs and CALLs get bought in roughly equal measure for roughly the same price all day, as no one is sure enough to stick his neck out and step deliberately in either direction.

And that’s what leads to the compression.

It’s that uncertainty – that ‘where to next?’ ambiguity and sense of anxiety – that also ultimately triggers the cascade of selling that follows.

So where are we now? 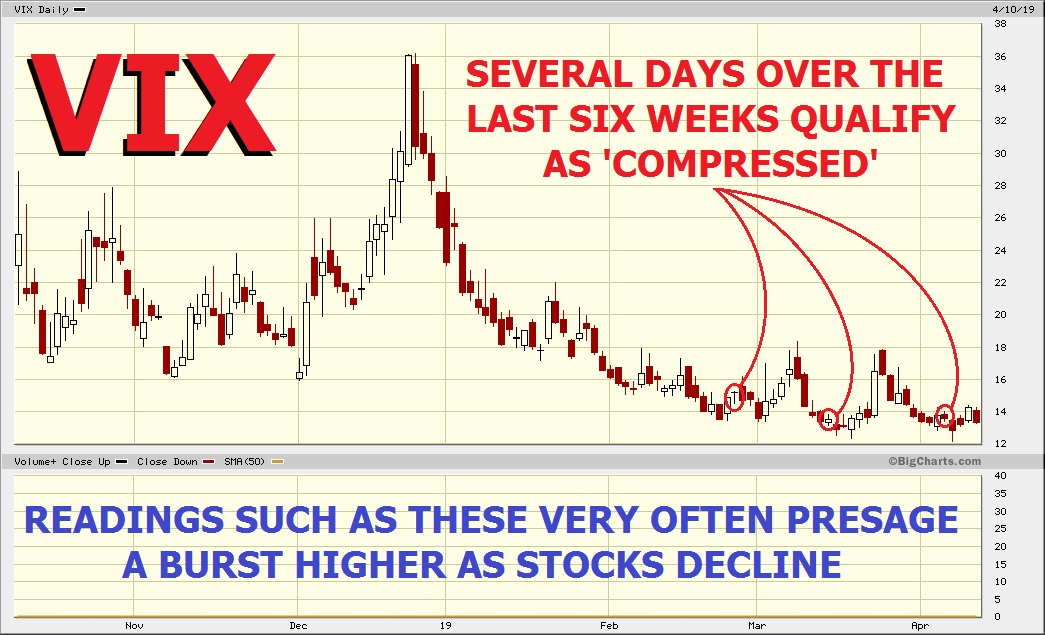 As you can see, we’ve had three compressed reads (in red) since late February – none of which, it should be noted, rank as ‘extreme’ in our book.

Notwithstanding that, we believe that signals such as these, which often occur in bunches, could be setting us up for a pullback that coincides with a weak earnings season.

Should it occur, we expect it to be short and sharp.