Understanding This Pivotal Point in Investment History
[Or: Why the Big Picture Always Helps]

Without a clear understanding of where you are, there’s no way you’re going to get to your destination.

And for that reason, we’re taking a few minutes to pinpoint that precise juncture of investment history at which we now reside. 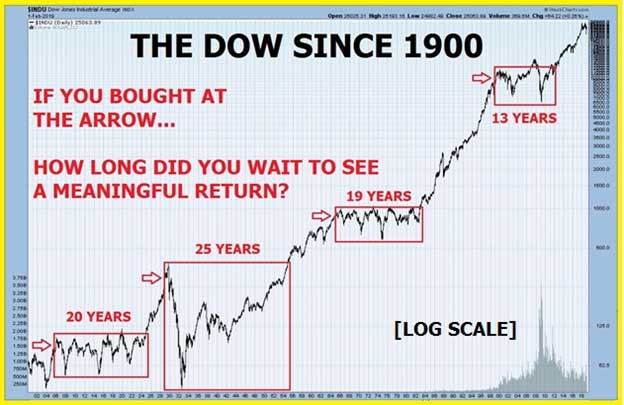 This is the Dow Jones Industrial Average since 1900.

What’s clearest here is the extraordinary ‘stop and start’ nature of the market over that period.  Put differently, and more to the point: there were times when investing in the broad market was clearly a multi-year losing proposition.

Those areas blocked in red demonstrate just how ‘multi-year’ it was.

Had you leaped into the market at any of the four red arrows and purchased a basket of the best blue chip names, you waited on average 19 years before you saw a capital gain on your brokerage statement.

So what’s the upshot?

It’s quite plain.  Over the last century, timing one’s entry into the broad market was very often the sole determining criterion of investment success.

And unless the dividend income on your stocks was at least 5% per annum – and you were constantly compounding those funds – you were barely keeping up with inflation.

So the question naturally arises – where do we stand now?

After the longest bull market in history – that began in the deep, cool fissures of March, 2009 and has continued for a full decade – after fifteen thousand points on the granddaddy of all stock indexes, is it all over?

We have tools at our disposal to evaluate that question, and we have our experience and common sense, of course.  But still, it’s not so easily answered.

Because the level of intervention in the equity (and fixed income) markets over the last decade has been as exceptional as it was deep.

The money supply in this country did a wha-fa in 2009, and nobody knows fully what repercussions lie in store for the economy as a result.

And not just in the United States.

The entire world – from Japan, (who’s financial history honors them with the original central bank mark of Cain), to China to Switzerland and the ECB, the level of public funds that has entered the capital markets over the last ten years has been staggering.

And that raises a second question – do our tools work anymore?  Do those markers and metrics we once applied to understanding equity markets still have value?

Well… we’re pleased to announce that the answer is yes…

That is, we can take the measure of the market according to traditional metrics and come away with the honest conclusion that equities are overbought in relation to historical norms and therefore due for a major retreat.

Yet, on the other hand, we have to consider whether all that new cash created over the last decade has reached its final destination – has it all, indeed, entered the system?

Or, as one of our mentors, the great Richard Russell, might have said – has the bull market exhausted itself?

For that, indeed, is the only question.

And the Answer is…

To keep it brief, our opinion is no, and we derive that from a number of data points, both public and proprietary, technical and sentiment related, that we regularly share with subscribers.

That said, let’s look now at a few more recent charts of the broad indexes to gain some perspective.

To begin, let’s have a look at the daily Dow action for the last three years – 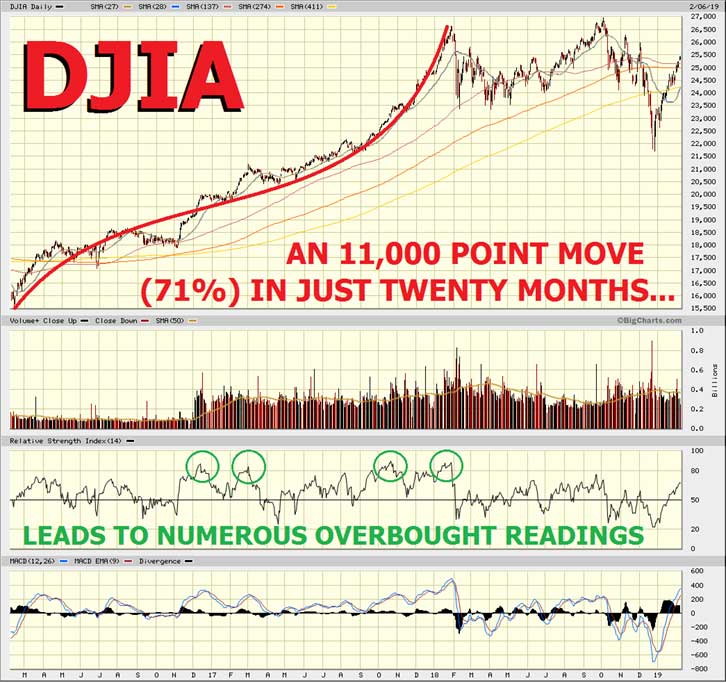 What’s most troubling here is the last overbought RSI read (in green) that occurred in January of 2018.  It’s troubling because it also coincided with an overbought read on the weekly chart (below) – 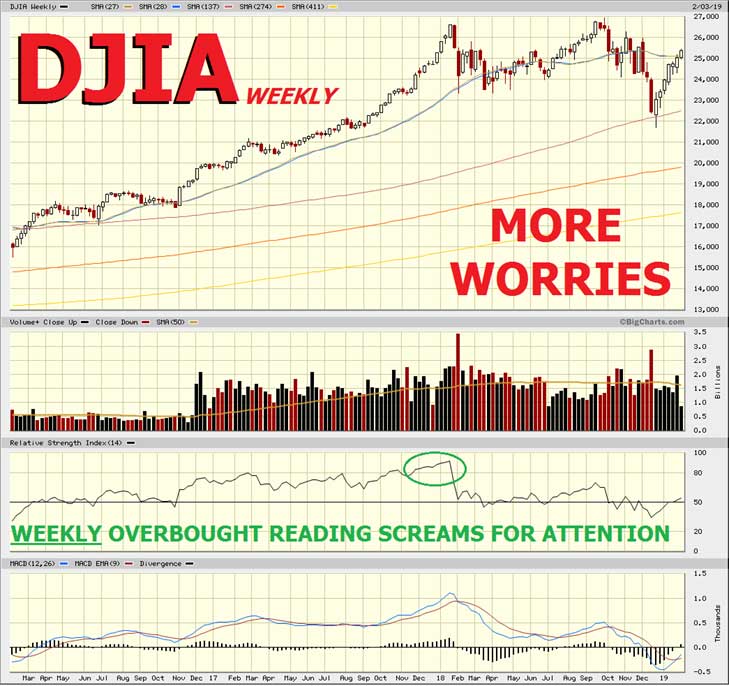 And if that weren’t dire enough, the monthly chart, too, went overbought in January, 2018. 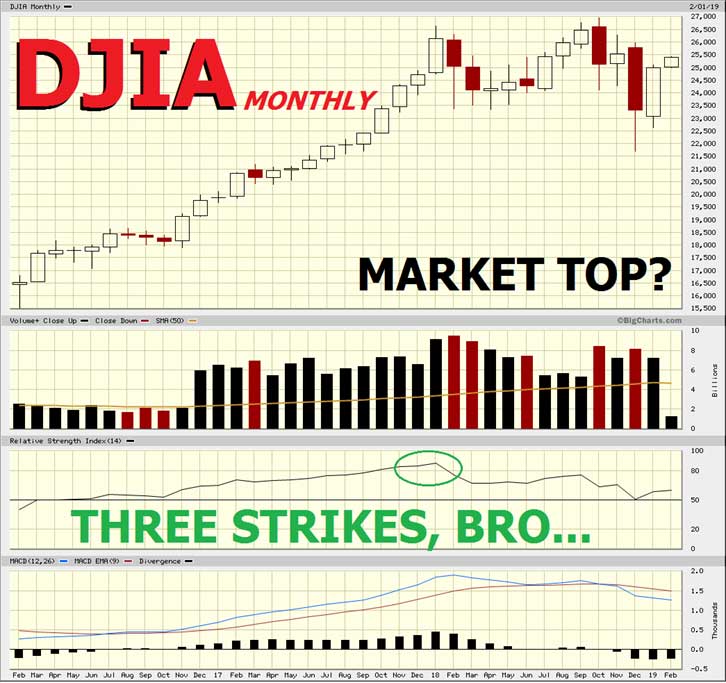 We should note that three RSI overbought readings occurring simultaneously is an extremely rare phenomenon and under normal circumstances would speak directly to the necessity of scampering immediately to a lifeboat.  Bear market.  Hunker down.  Valium.  Prozac.  Chamomile tea.

This, however, was all the more potent a signal because those three RSI overbought reads turned up on the Dow, the S&P 500 and NASDAQ Composite at precisely the same time!

We urged readers to lighten up at the time, and even though the DOW went on to post a marginally higher high (and the NASDAQ a significantly higher one) later in that year, we stand by the advice we offered at the time.

But You Didn’t Call For a Bear!

Because of the aforementioned Fed-induced sea of liquidity, and the extraordinarily poor sentiment numbers issuing at the time (which we’ll now discuss), we concluded that the stock market was due for a breather – even a meaningful retrenchment – but that the bull market in equities was patently not over.

And the last year’s action has borne that out.

And now to sentiment…

We’ve written at length about the importance of sentiment in our Full Trade System White Paper, and we encourage you to go there now to learn more. 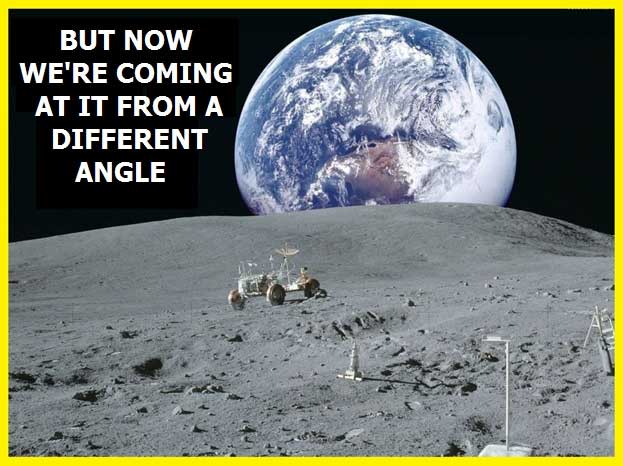 Last January, a host of sentiment numbers, including our own proprietary Sentimeter reading, were expressing a confidence in the equity market that we had not seen for years.  However, it was not a level that represented, in our opinion, that of a market top.

Normally, excessive levels of bullishness are a contrarian indicator, correlating to market tops.  But the raw numbers – as high as they were, relatively speaking, last January – were not rich enough to indicate an end to the bull.

Moreover, since last January (2018), all retracements higher on the indexes revealed less investor optimism, not more – precisely the opposite of what one would expect from a full-on bear market.

That being the case, we can confidently reaffirm several things today regarding that point in investment space in which we currently reside –

The only way to play the market successfully during the upcoming blow-off top will be according to the principles and rules we’ve laid out in our Strategy Paper, and again, we encourage all who have not yet done so to go there for an important and enlightening read.

A Final Word on Sentiment

Our feeling today is precisely as it was a year ago.

That is, we see a market that’s exhibiting a mixed technical picture and could retreat in the near- to intermediate-term, but that a new bear market is currently not in the offing.

And it won’t be so until every Tom, Dick and Germaine has been pulled back into stocks and is dancing the Jitterbug Plotz with his dog.

Remember – the market is singularly successful at just one thing – separating hard working individuals from their life savings.

There ain’t no stock market top.

Sign up now to receive A Jew and His Money directly to your inbox.

Take advantage of our free 30 day trial offer, or

Click here to determine which membership option best suits you: