The Perils of Gold Fever

For those who count themselves among the ‘hard money’ crowd and daily obsess over the price of the precious metals, the question invariably asked is – “When?” 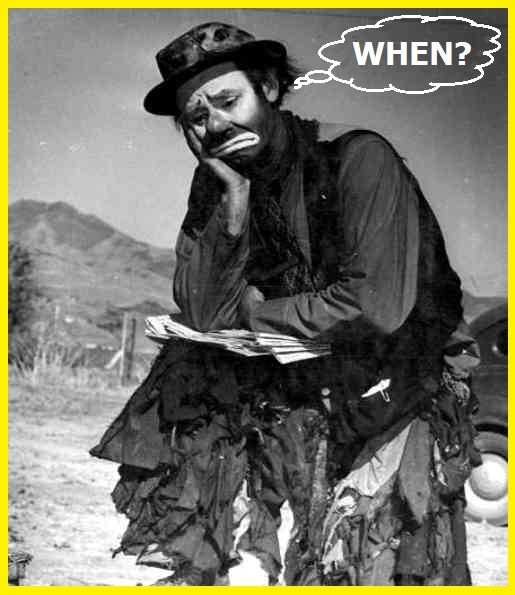 When will gold and silver break out of their almost decade-old flaccidity?

When will the former highs be breached?

When will the long-awaited, explosive surge in price occur, sending the yellow metal to $5000 and her greyish step-sister to $100?

And for the hardest core among them: when will the ongoing ‘manipulations’ of the metals finally cease, the perpetrators be jailed and the truth be allowed to prevail?  When will real money (gold) take its rightful place as a daily means of exchange?

And while we admit to a certain sympathy for these gold buggerers, we have to add – with a chortle – that, as a group, they’re overwhelmingly pathetic. 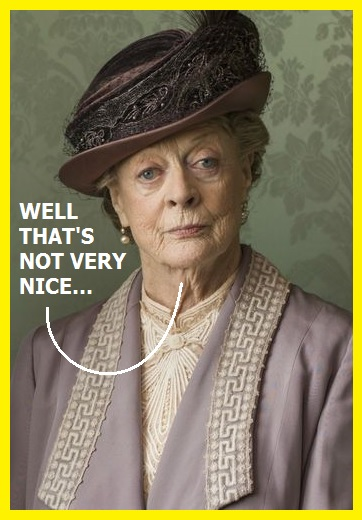 No, no, you misunderstand.

Not because they’re wrong.

On the contrary – gold and silver will certainly have their day.

But it doesn’t appear imminent.

Nor, to our way of thinking, does it matter in the least.

“May You Always Know the Difference Between What’s Important and What’s Not.”

Our Rabbi, G-d rest his soul, was in the habit of offering the above-quoted blessing to nearly every newlywed couple, bar mitzvah or baal habrit that requested one.

And the truth be known – there’s no greater wisdom.

But that doesn’t register with the gold-bug.  Trapped by his anticipation of ever higher prices, he’s completely blind to what’s crucially important – to the knowledge that might set him free from those gilded handcuffs that bind him.

And what is that truth?

It only matters which side of the trade you’re on. 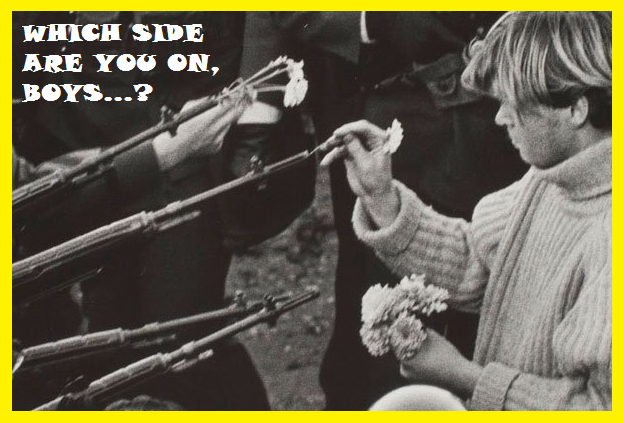 We had a friend who several years ago refused to heed our warning about an imminent selloff in the PMs.  He loaded up on silver just as the metal was topping, though we warned him strenuously against the move.  Every sign and symbol associated with silver was screaming ‘overbought’ at the time, but this fella thought he knew better.  He piled his own life savings on top his father’s, which he was also managing, threw it into the pot and spoke about the fortunes he was about to make.

After that, we spoke less.

He was embarrassed, and we understood.

When we did meet, he would ask our opinion – whether we thought the metal had bottomed, or if it was close to bottoming. We averred that it was probably still best to sell, take a loss and move on.

But he couldn’t do it…

Because he believed that silver would ‘come back’. 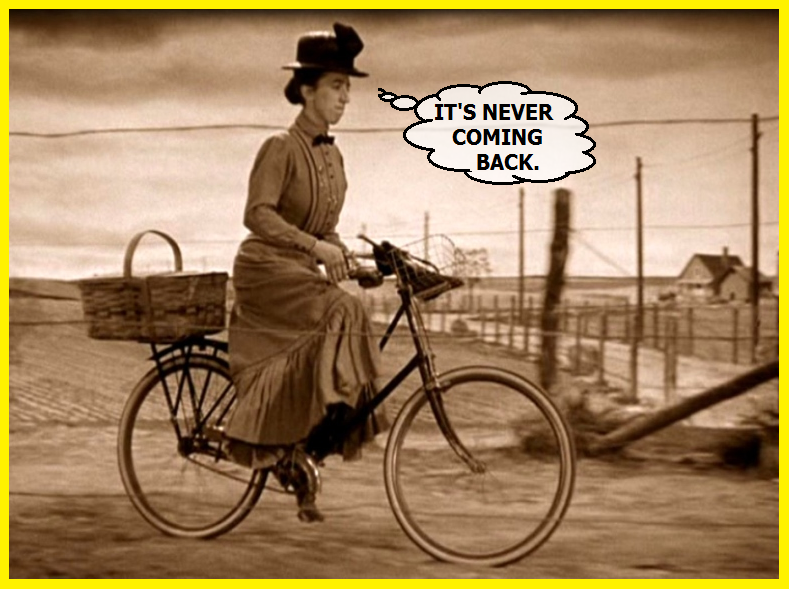 The truth of the matter is he couldn’t bear the embarrassment of being wrong.

He was in love with the idea of silver shooting the moon, not with the reality of silver’s (then) downward trajectory.

That wasn’t the exciting lady he married, after all.  This one was a dullard.  The one he wedded was a polished and shiny lass, sparkling and beautiful.

“Sure enough,” he confided, “she’ll come back.” 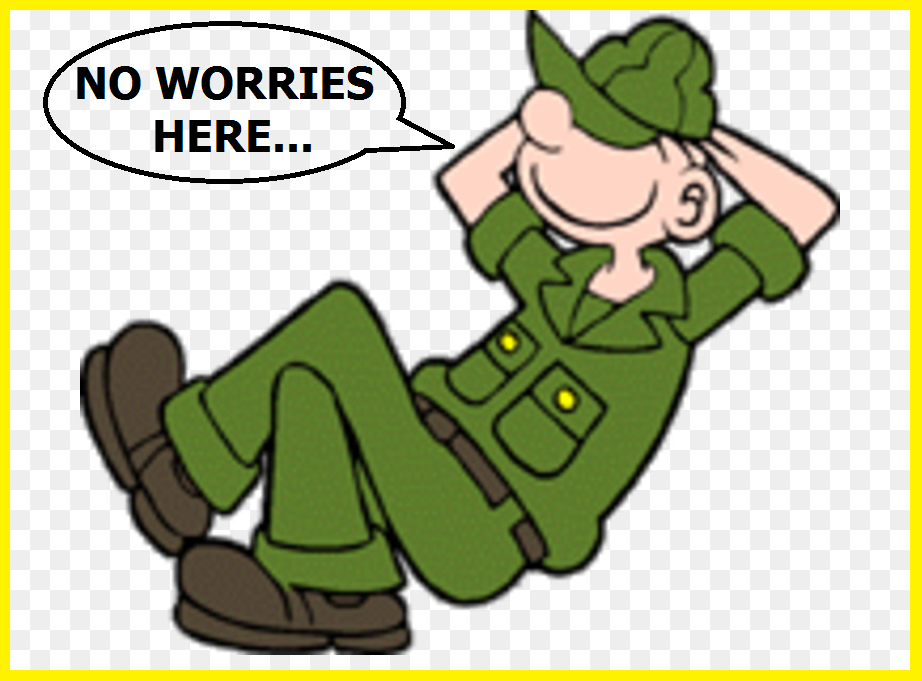 That scene was repeated several times over the course of the next year-and-a-half, at the grocery store or park, or on the sidewalk of our small town, and each time the gentleman inquired, we told him it would be best to take his lumps and redeploy in an appreciating asset.

But he insisted he wouldn’t – he simply couldn’t bear to take the loss.

And we can’t begin to imagine how he’s feeling now.

We raise the question of our friend and his willingness to take a loss as an object lesson for all who’ve yet to experience the phenomenon of a losing trade – or even those who have.

And the lesson is as follows: that it’s better to close out a hundred trades with minor losses rather than suffer a wham-doggy wipeout – a catastrophic face-plant that renders you pale, depressed, pimply and impotent.

So long as the losses are promptly closed and the gains permitted to accumulate, all is well.

Sadly, though, that’s not the way Gold Fever progresses.  The disease has its own self-destructive trajectory, with plenty of shocking symptoms, bubbly lesions and, unfortunately, nary a cure to be had.

One of the many delusions that manifests during an acute bout of gold fever is the following, and it’s one we hear aplenty.  Our friend from the above-listed tale often alluded to it.

And what is it?

The claim is often made by otherwise sober-sounding analysts that dark forces and shadowy, sinister groups that meet in dank chambers are daily deciding the fate of the precious metals.  And to boot, they’re engaging in every possible collusion, conspiracy, and otherwise criminal contingency imaginable to keep the price of gold from ascending in line with their (the analysts’) expectations.

The motivation behind such decidedly childish behavior (precisely what it is) is twofold.  First, it keeps the simple folk who read their so-called analysis holding on to their positions as they await the outcome of this Manichean conflict – thereby propping the price of gold, to whatever extent that might be possible.

And so you hear regularly –

“It’s the Council on Foreign Relations.”

“And when they’re finally exposed, there’s going to be a wild rush to cover – one that hammers the manipulators into financial Armageddon!  And then we’ll all be rich!  Super rich!  Richer than rich!”

We hate to belabor the point, friends, but if you plan to be a winner in the long run, you have to be willing to admit you’re wrong when the market tells you – and you have to act swiftly to shut down your bad bets.

But there’s a deeper truth here, too, and it’s one we alluded to above –

Though we don’t fully believe it, in the end, gold and silver might, indeed, be manipulated.

The price of gold and silver can only move lower if there are more sell orders than buy orders – and that’s all that anyone who’s interested in making money should be concerned with.

You want to root for your investments?

You want to marry your gold?

Good for you.  We wish you a fruitful, trans-metallic commoditized future!

May all your offspring be bar-like and shiny! 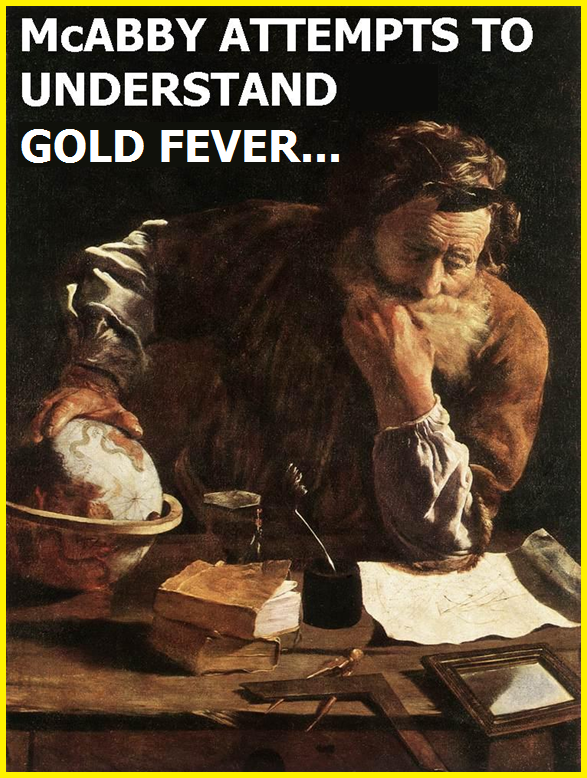 If we might engage in a little Monday morning psychotherapy, we’d suggest that those in the grip of gold fever make a fundamental error in believing that there is no value too high for their metal to rise.

And because they believe this, they also believe that every correction is a manipulation, and every downdraft but a minor delay in their inevitable rise to becoming sovereign dominantro kings of the universe. 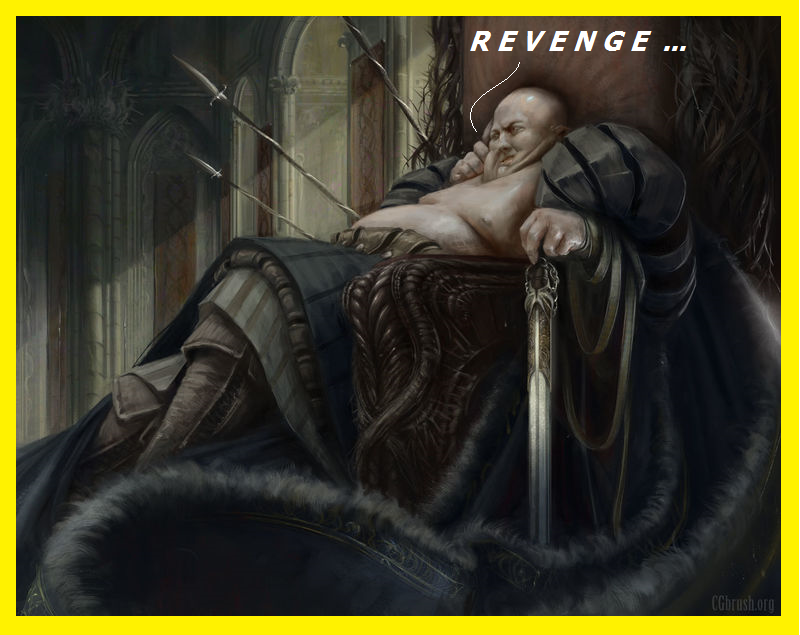 While in truth, they’re just guilty of sloppy thinking.

First, because gold has outperformed both stocks and bonds for the last two full decades (including the period of the dreaded ‘manipulation’.)

Against the stock and bond markets, gold has wildly outperformed since 2001.

The other muddle-headed mistake they make is forgetting that gold doesn’t exist in a vacuum.

Gold will rise and fall in accord with the cash flows that buffet it (as does every investment vehicle on the planet).

There are no exceptions.

And one of the factors that contributes to those flows is the relative strength of other asset classes.

So, in this fast-food investment world in which we live, where immediate gratification is the only rule, yesterday’s gold investors will instantly dump their precious metals holdings and race to buy whatever security they discover is today outperforming.

And only those adherents to the gold ‘religion’ – those who are virtually married to the shiny metal and not to the profit principle – will be left holding the bag, squeezing tight their dead-money purses while opportunities to increase their wealth drift diamond-like past their bleary eyes. 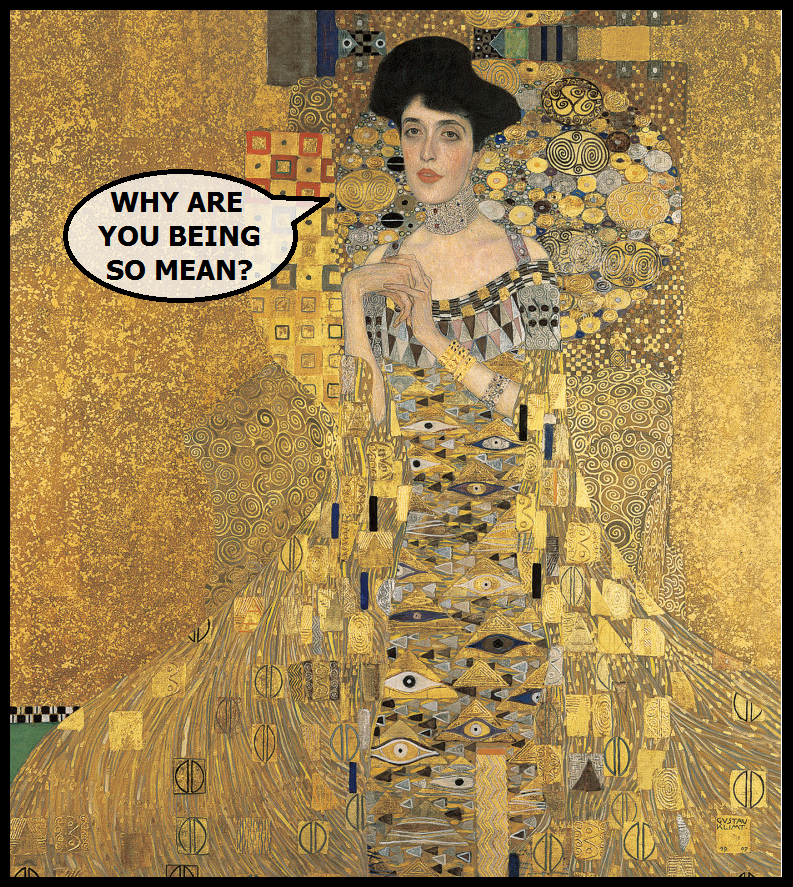 We’re not.  Nor is it our intention to give goldphiles too vicious a slap on the Bruno.

We just want to say that gold is as gold does.

There’s a particularly helpful technical indicator that we’d like to share with you today, that could prove instrumental in determining whether it’s time to get back into the gold market.

It’s our experience that major turning points in the movement of securities don’t occur until all salient moving averages are entirely unfurled, either higher or lower.  Tops occur after MAs are unfurled higher and bottoms after they’re unfurled lower.

That’s not to say the turn comes immediately after the aforesaid ‘unfurlment’.  Rather, that the unfurlment is a precondition for the turn.

Have a look at the current weekly chart for gold – 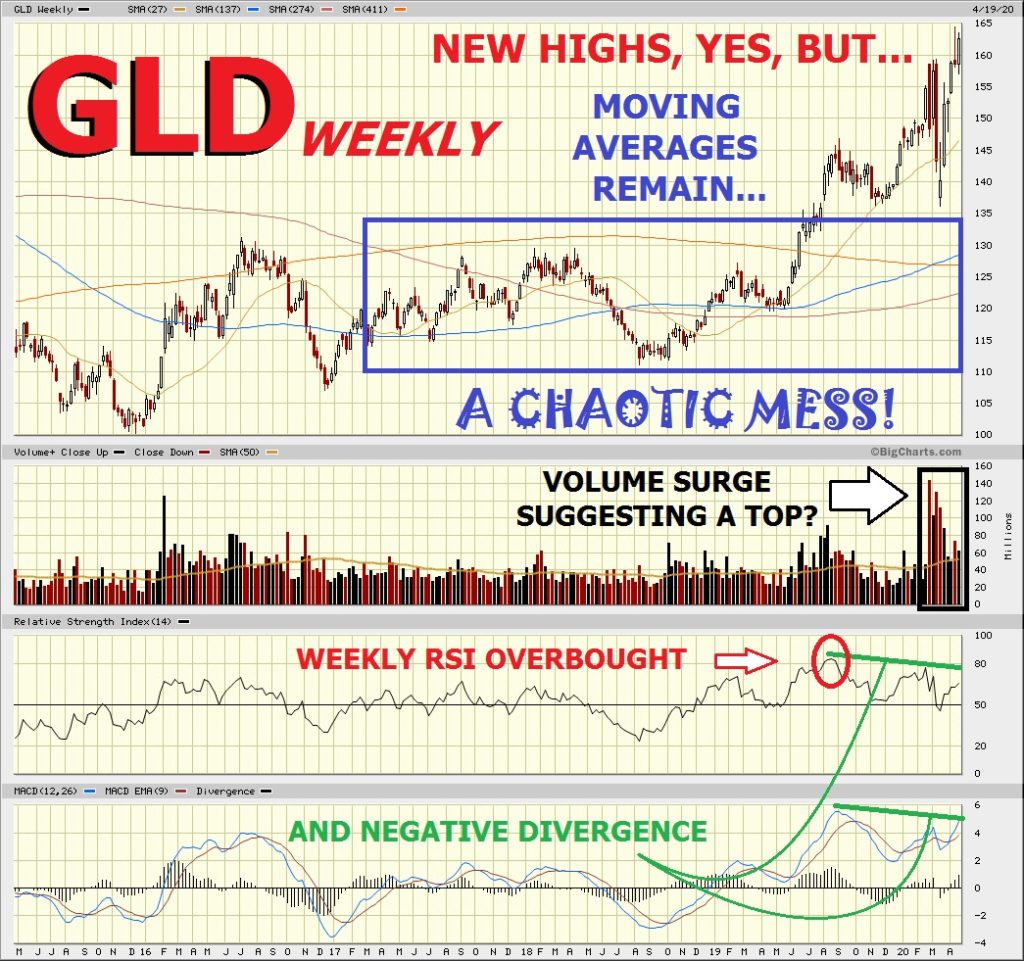 This is the SPDR Gold Shares ETF (NYSE:GLD), an excellent proxy for gold, for the last five years.

All of which points to upcoming softness – and potentially steep declines – for gold in the intermediate term.

As to proper action from the moving averages – and what might suggest a possible turn for the fortunes of gold – is a pattern that looks like this: 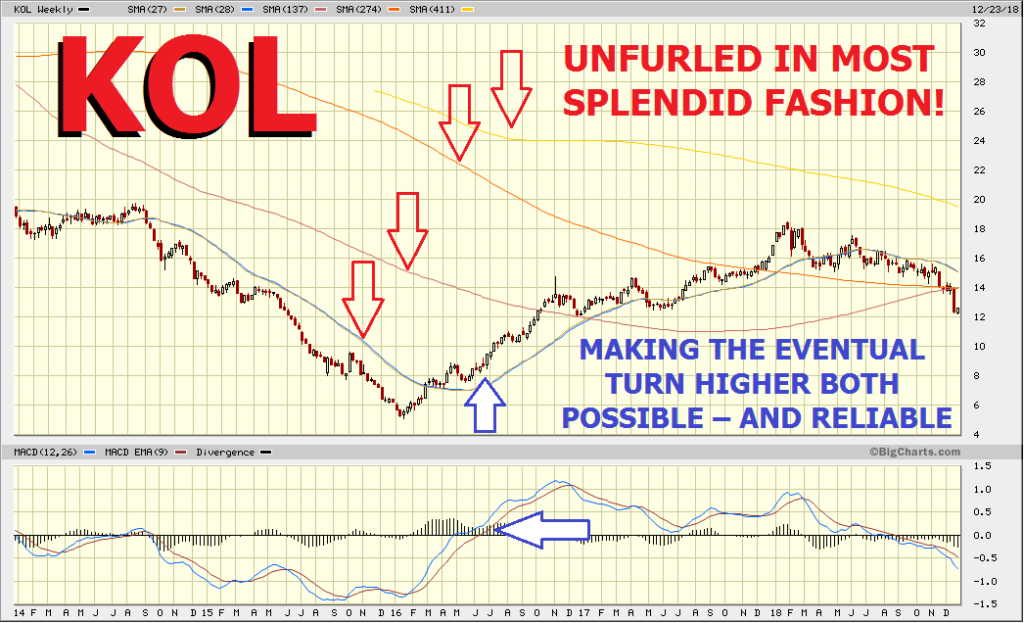 This is textbook ‘unfurlment’ and bodes well that a move higher, though never guaranteed, has a greater likelihood of succeeding.

In this case, the VanEck Vectors Coal ETF (NYSE:KOL) jumped 200% after the full unfurlment (in red) and a MACD cross above her midway waterline (in blue).

Because we don’t see a full unfurling on the gold chart, and because numbers 2, 3 and 4 (above) still obtain, we’d suggest that the much heralded break to gold $5000 has yet to commence.

But will gold continue to fall?

We can’t say with any certainty that gold is on its way appreciably lower, but we do know that a decline to the $900 level would not surprise, as it would be in keeping with a simple, long-term Fibonacci retracement.

Moreover, if the excitement in equities resumes, a great deal of money will likely flow from the gold quarter back into stocks, possibly pulling the entire commodity sector lower. 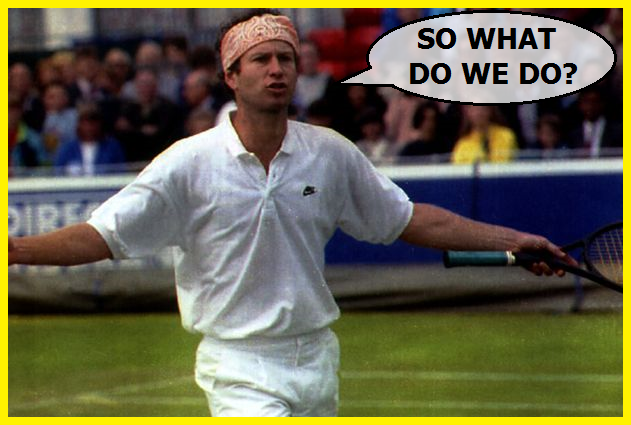 The trade that emerges from our read of the charts is a short sale of GLD with the purchase of a protective CALL option.

The psychology of a losing investment is hard to break.  If, like many goldphiles, your portfolio’s holdings have become a tenet of your religion, if you’re prepared to go to the rack, or the auto-da-fe or guillotine rather than commit heresy and sell your position for a loss, then you’re likely going to suffer further losses, depression and, eventually, financial death.

Know, too, that it’s often the case that the longer you hold your position, the more fervent you become in your beliefs, the more committed you become to martyrdom, and the more apoplectically rigid you pledge yourself to the righteousness and justice of your cause.

Call it a form of madness.

It happens every day.

We Forget the Simple Truths

Proper procedure, of course, is to bail out when things go awry and look for another train.

Call it what you want – chasing winners, bandwagon jumping – it doesn’t matter.  In the uppity world of investment strategies it’s called a ‘trend following system’.

Fancy that.  ‘Trend following.’  Going with the flow.  Something we did unintentionally and with slick efficiency when we were just fifteen!

Gold and silver will rise in a new, precious metals bull market only when those who consistently and fervently trumpet their love for it, turn on their former paramours and insist that the double crossing vamp was actually the worst possible asset to own that ever was!

And that has yet to happen.

Stay with us, friends, as we map all the turns.

A Jew and His Gold…